LAUSD SCHOOL BOARD TO CONSIDER LAYING OFF NEARLY 200 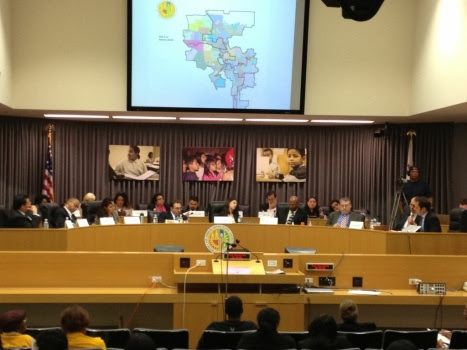 February 12th, 2013, 5:00am  ::  Tuesday’s school board meeting will be jam packed with no less than 51 items requiring some action. But here are a few of the highlights that the board will be voting on:

The Los Angeles Unified School Board will take up whether to lay off 194 staff in the 2013-14 school year.

“These RIFs (Reduction in Force) are unconscionable at the time when our students are most vulnerable," Fletcher said in a written statement. “In times of tragedy or dealing with everyday stresses, students need access to the invaluable services HHS employees provide on campus."

The layoff notices would go out by March 15 and take effect June 30. School officials said they're motivated by a budget shortfall.

The measure is one of 51 items on the board's agenda Tuesday. Another: Superintendent John Deasy is asking the board to approve a $50 million project to supply every student and teacher with a tablet computer by 2014.

The board will also vote to approve a new teacher evaluation system that would include data from state standardized tests.