6 February, 2013  ::  When 18-year-old high school senior Krystal Myers tried to speak out about what she perceived as heavy-handed religious indoctrination by her Lenoir City, Tenn., public school, she got a lesson in “Hazelwood justice.”

School administrators removed her column, “No Rights: The Life of an Atheist,” from the student newspaper. Justifying the decision, the district superintendent explained that the article would be “distracting” because it might provoke “passionate conversations.”

How we got to a place where passionate conversations about social and educational issues became a distraction from the school day—and not a central purpose of the school day—is the story of Hazelwood School District v. Kuhlmeier. 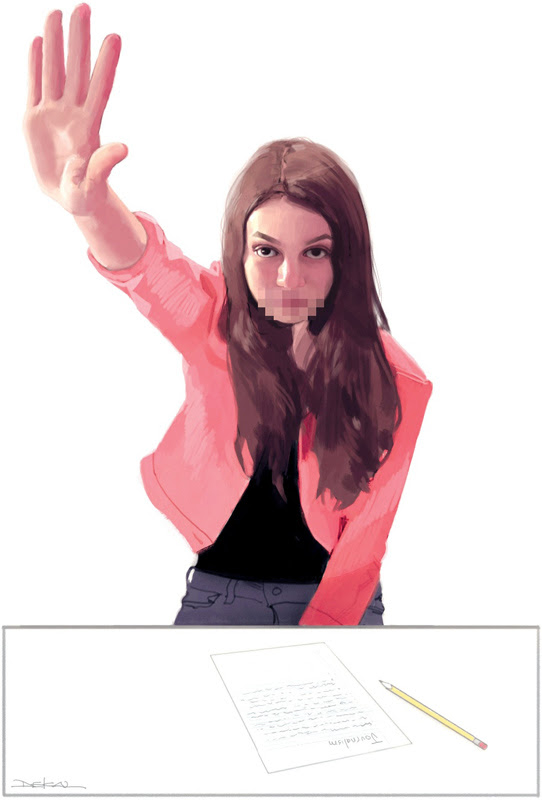 Twenty-five years ago, the U.S. Supreme Court decided that a Missouri principal did not offend the First Amendment when he removed articles about teen pregnancy, divorce, and other so-called mature topics from a high school newspaper. By a 5-3 vote, the court ruled that, when students use an expressive “forum” provided by their schools, administrators are free to censor their speech on any basis “reasonably related to legitimate pedagogical concerns.”

The decision was legally dubious from the start. It was built on the doubtful assumption that students have diminished First Amendment interests in school-subsidized newspapers because those papers are not meant to be vehicles for the expression of student views.

A generation of experience later, Hazelwood has been thoroughly discredited not just as unsound constitutional law, but as unsound educational policy as well.

Policymakers say they want accountable schools. But Hazelwood censorship defeats school accountability, by depriving the public of truthful information from those in the best position to know when schools are mismanaged or ineffective. Hazelwood emboldened the principal of Illinois' St. Charles East High School to suppress a news story in which students described widespread hazing in school athletics. Hazelwood gave cover to the principal of Madison County High School in Madison, Va., to confiscate newspapers in which students used public records to expose unsafe conditions in their school's dilapidated facilities.

If students are forbidden to tell the public about schools' shortcomings, who will? Not professional journalists, whose ranks have been so decimated by layoffs that, according to a Brookings Institution report, education accounted for just 1.4 percent of all mainstream news coverage in the first nine months of 2009. Not school employees, who largely lost their First Amendment right to safely blow the whistle on school wrongdoing when the Supreme Court decided Garcetti v. Ceballos in 2006.

Adults are more dependent than ever on reliable information from students. A professional newspaper in Newark, Ohio, just announced that it is eliminating paid staff positions for its “community news” section and turning the section over to unpaid high school students, and other news organizations are expected to follow suit. If the general public is to rely on students to gather and report news, then the public needs assurance that those students can, like professionals, candidly report the truth without government “editing” or retaliation.

Policymakers say they want civically aware students who graduate ready for meaningful participation in their government. But Hazelwood censorship undermines civic learning, by teaching young people that the government gets to decide how and when it may be criticized.

At a recent symposium assessing the impact of the high court's decision, David Cuillier, the director of the University of Arizona's school of journalism, said the college has been forced to adopt a remedial First Amendment course to repair the civic damage done to students in K-12 schools: “I have been so alarmed by the kinds of students coming into our college programs who are completely unprepared for what journalism is about. They think it's OK to be told what to print and not to print. They don't challenge authority like they should.”

No less an authority than retired Supreme Court Justice Sandra Day O'Connor's Campaign for the Civic Mission of Schools has identified a meaningful voice in school policymaking as one of the foundational necessities for effective civic learning. Hazelwood censorship devalues that voice to the point that many students have stopped even trying to make a difference. (Considering how often Hazelwood is applied to dampen students' civic involvement, it is ironic that Justice O'Connor cast the deciding vote in the 5-3 ruling, since a 4-4 deadlock would have given the victory to the students.)

It is little wonder that students who have been told for 12 years that “you can't fight City Hall” go out into the world convinced that it is a waste of time to take part in their government.

Policymakers say they want students to learn to use the Internet safely and responsibly. But Hazelwood censorship drives students away from organized journalism, the most effective means of teaching responsible online publishing habits.

Verification, attribution, balance, and responsibility are the foundational values that students learn by participating in journalism, and they are the values that all “digital citizens” should graduate with. But censorship makes participation in student media frustrating and unrewarding. It relocates the discussion of school issues from the accountable and adult-supervised pages of the newspaper to the anything-goes pages of social media, where no learning takes place.

Policymakers say they want to end school bullying. But Hazelwood censorship invariably disempowers the weakest students in the school. It is institutionalized bullying of the worst kind.

When Tennessee's Lenoir City High School fired its award-winning journalism adviser in response to pressure from religious zealots over a feature story in the yearbook about “coming out” as gay, gay and lesbian students heard the message unmistakably: The school board, the superintendent, and the principal agree with those who find your existence abhorrent, and they will not come to your defense.

Student media is the safe haven where students who are not athletic stars or beauty queens find acceptance and self-worth. To tell marginalized students that their opinions have no value is an act of bullying more vicious than any Facebook insult.

A better way exists. Seven states have statutes that restore the sensible balance between authority and individual liberty that Hazelwood threw out of whack, by limiting the grounds on which schools may censor student expression. (Illinois has such a law that applies only at the college level.)

Combined, these states provide us with 146 years of experience with student-controlled publications, and in those 146 years, zero documented cases of any successful claims for libel, invasion of privacy, or any of the other imagined “horribles” with which lobbyists for school administrators terrify legislators whenever “anti-Hazelwood” legislation is proposed.

More poisonous than the flawed legal doctrine that Hazelwood introduced is the mentality it has fostered. It is a mentality that the paramount concern of school governance—more important than effective teaching and learning—is to get through a day without controversy.

It's time to acknowledge that Hazelwood is a failed experiment on America's young people and to recognize that public schools are a forum where the discussion of diverging views on political and social issues is not merely to be tolerated, but welcomed. Students cannot learn constitutional values as a remote abstraction that exists only in history books. And they cannot learn civic participation by being told to keep their opinions to themselves because the government is always right.