“In states that make it a priority to educate our youngest children — like Georgia or Oklahoma,” President Obama said in his State of the Union address, “studies show students grow up more likely to read and do math at grade level, graduate high school, hold a job, form more stable families of their own. We know this works.”

Oklahoma’s getting a lot of attention lately for its pre-K program. In fact, insofar as the administration is basing its efforts on any particular model, Oklahoma is the one they name. But is it the right model? 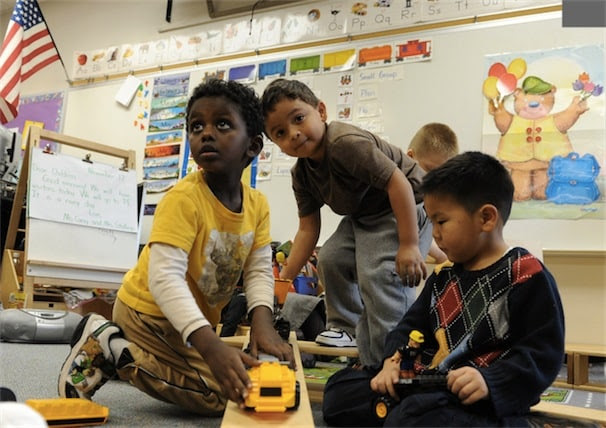 Since 1998, Oklahoma has offered universal access to pre-kindergarten and has one of the highest participation rates in the country, with 74 percent of all 4-year-olds enrolled in a pre-K program. A wealth of research has shown the effort has improved these students’ academic, cognitive and emotional abilities, which researchers attribute to a strongly supported program with higher standards. But it’s unclear whether those gains persist further down the road and how a program like Oklahoma’s could be replicated nationwide.

Oklahoma’s universal pre-K initiative is particularly striking coming from a deeply red state with a limited budget. The expanded pre-K access was slipped into a bill without fanfare in 1998 by Democratic state legislator Joe Eddins. But the effort to improve pre-K quality and access actually began decades earlier, spearheaded by child advocates and officials. “They saw the benefits of a quality early education system, and it took years and years for it to really get off the ground,” said former govern Brad Henry (D), who took office four years after the pre-K bill passed.

The longstanding advocacy for pre-K in Oklahoma helped ensure that the program put into place had high standards for teachers and classrooms. “You can put [children] in a glorified babysitter situation, but it may not have the same impact,” Henry said.

Oklahoma’s 1998 law gave more funding to schools that enrolled 4-year-olds and allowed school districts to collaborate with federally-funded Head Start programs, churches and other outside organizations to share resources. The law also created stringent standards for the classroom: All pre-K teachers had to have a college degree and a certificate in early-childhood education, and they were paid the same wage as K-12 teachers. The student-teacher ratio had to be at least 10-1, and class sizes were limited to 20. Participation by both students and school districts is voluntary, but both quickly flocked to the program.

The effort seems to be paying off. William Gormley and other researchers from Georgetown University’s Center for Research on Children in the United States have conducted extensive, peer-reviewed research on Oklahoma’s pre-K programs. They’ve consistently found that the children who’ve enrolled in pre-K outperform those who don’t, across both racial and class lines.

In studies published in Science and the Policy Studies Journal, Gormley and his co-authors found that the pre-K programs in Tulsa significantly improved young children’s ability to identify letters, spell and solve problems—leaping an average of five months ahead in pre-math and nine months ahead in pre-reading skills. “Those are really big gains,” Gormley said. “Oklahoma decided that it was a waste of time and money to have a low quality program, so it decided to have high quality programs…which can produce really big improvement in school readiness for a wide range of children.”

Gormley’s research showed that children from both poor and middle-class families, across racial groups, posted gains from their pre-K education. The benefits were particularly robust for those children who were learning English as a second language. “Early literacy skills increased pretty dramatically for Hispanic students,” said Lisa Guernsey, director of the New America Foundation’s early childhood education initiative.

However, there’s still limited evidence of the long-term impact of a strong pre-K education for certain groups of children—and whether it’s really the best kind of intervention. While there are some major studies showing the social and economic payoffs of pre-K for disadvantaged children, there isn’t as much evidence about the long-term impact for middle-class children.

What’s more, many of the seminal studies about pre-K’s long-term impact were limited to small sample sizes. Oklahoma’s pool is far larger, but researchers are still gathering evidence about pre-K’s impact in the long run.

Defenders of the Oklahoma program counter that the drop in scores doesn’t take into account the state’s shifting demographics during the same period, during which many more Hispanic and English-language learners had entered the school system. Gormley also points out that it’s taken some time for teachers to adapt to better-prepared students, pointing to research revealing that more recent student cohorts are performing more strongly.

It’s also possible that the benefits of pre-K show up in areas other than content-knowledge tests, like socialization, or ability to work well in structured environments. Many of the small studies showing huge returns to quality pre-K shows that adults who went through the programs as children find it easier to hold a job, stay married, and keep out of jail — all of which might mean the benefits are coming through mechanisms other than pure school performance.

If other states—or the entire nation—were to adopt some version of Oklahoma’s universal pre-K program, its architects and supporters caution that certain elements need to be in place for the program to be effective. Skimping on quality to save money could undermine the entire effort, Gormley warned. While Florida also has universal pre-K—with an even higher enrollment rate than in Oklahoma—politicians there decided “to do it on the cheap,” he said.

In 2011, $2,400 was spent per child in Florida’s pre-K, and the state failed to meet the majority of quality benchmarks, according to the National Institute of Early Education Research. “Odds are that isn’t enough to actually make a positive difference.” By comparison, Oklahoma spent $3,500 in state funds, and its Head Start partnerships brought total average spending to $7,700 per pre-K pupil in 2011. The state met 9 out of 10 of the NIEER’s quality benchmarks.

In other words, funding matters—and that could be a particular sticking point for  for policymakers who want to create universal pre-K nationwide, particularly as Obama has vowed to pass a deficit-neutral program. Even in Oklahoma, recent budget constraints have lowered per capita spending for pre-K. Supporters believe that the investment is clearly worthwhile. ”They’re aren’t many ways to spend your money more efficiently,” said Henry. “It’s great return on investment.”