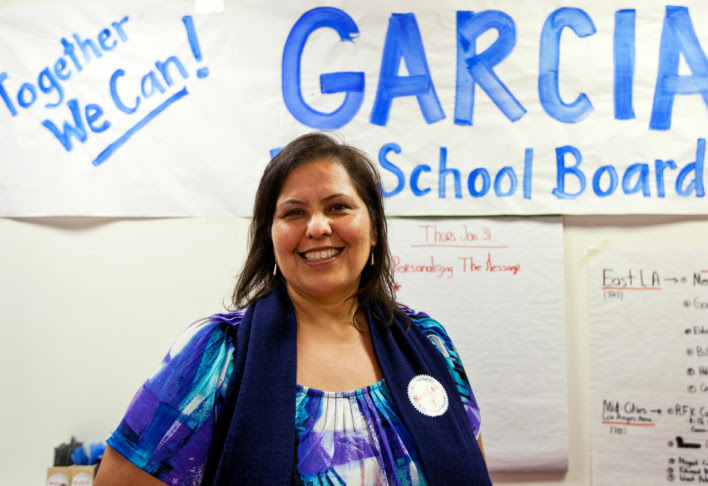 Maya Sugarman/KPCC  -  Incumbent LAUSD Board President Monica Garcia inside her campaign office in East LA on Thursday, Jan. 31. Garcia, among other candidates, have received donations from Hollywood.

February 5th, 2013, 6:00am  ::  Hollywood donates a lot of money to national political campaigns. Big players in “the industry” have also donated to Los Angeles City Hall races over the years. But L.A. Unified school board races have been way off the radars of these big donors. Until now.

Nearly two-dozen people are campaigning for three L.A. Unified school board seats. Most of the Hollywood money is going to one candidate: school board president Monica Garcia. Nearly 10 percent of Garcia’s donations have come from the entertainment industry.

UCLA management scholar Bill Ouchi, an advisor to LA mayors on education issues for decades, says this is a new development.

“For many, many years our homegrown entertainment industry has not been actively engaged in the K-12 system, in really any way,” he said.

Ouchi supports Garcia. He donated to her campaign, too.

Why would people with no children in the public schools donate to a campaign for school board?

“We have a message that is strong,” Garcia said. “We absolutely need help to get our message out and I think it is very appropriate for every citizen and resident of this city to care who is on the school board."

Garcia said she doesn’t know these big Hollywood players and hasn’t asked them for campaign donations.

“These are people who don’t answer every phone call they get,” longtime Democratic political strategist Darry Sragow said, “so obviously this money is being raised because someone they know and trust and who has access to them has asked them to give.”

The person making “the ask” isn’t a staffer on Garcia’s campaign committee or a political insider. It’s Megan Chernin - wife of Peter Chernin, the former president of Rupert Murdoch’s News Corp. and current head of a TV and film production company.

She said she got involved because she’s aware that not everyone can afford to send three kids to LA’s elite Harvard Westlake private school as she and her husband did.

“I think that education is probably the single most important equalizer in society today and if I can do anything, that’s all I’m interested in doing,” Chernin said.

She said Garcia’s defeat on election day would be a big loss for LA. She’s tapped into her network to make sure that doesn’t happen.

“Do I know--who is it--Wes Craven, David Geffen? Yes I know them," she said. "I’d be flattered if an email blast that I sent out got people to pay attention or got people involved in anything around schools, I’d love to hear that."

Several of Garcia’s big Hollywood donors couldn't be reached. David Geffen was out of the country. Jeffrey Katzenberg’s people said he’d “take a pass on this one.” The chair of Fox TV, Dana Walden, said through a spokesman that she couldn’t make the time to talk.

She gave $500 to Garcia’s campaign. She said it hadn’t occurred to her to contribute to a school board race until she had lunch with Chernin, who is also raising money for the district’s arts education program.

“She’s so impressive and engaging that I just sat there and listened to her with my mouth open with all the different things she wanted to accomplish,” Nathanson said.

Garcia donor Davis Guggenheim has more of a stake in the public school system. His 2010 documentary, "Waiting for Superman," featured families in failing schools who saw charters as their last hope. Guggenheim donated the $1,000 maximum to Garcia—a supporter of charter schools.

The board election is on March 5th. Garcia expects a tough fight from candidates endorsed by a more veteran player — and spender — in board elections: United Teachers Los Angeles.

smf: As they say on the infomercials: “But wait, there’s more!”