The L.A. County sheriff also prohibits managers who are running for office from making job decisions based on political donations. 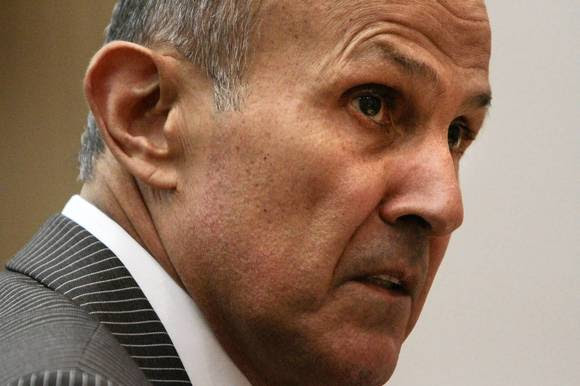 February 1, 2013  ::  Los Angeles County Sheriff Lee Baca told his deputies Thursday that he would no longer accept campaign contributions from department employees, according to an internal memo obtained by The Times.

Baca also said other sheriff's managers who run for an elected office would be barred from making employment decisions affecting employees who have donated to their campaigns.

Baca's announcement comes amid concerns that campaign contributions to sheriff's brass by department employees created potential conflicts of interest in promotions and other personnel decisions.

"It is the responsibility of every member [of the department] to avoid any situation which may pose a conflict of interest," the sheriff wrote in his memo.

Baca and his second in command, Undersheriff Paul Tanaka, who is also mayor of Gardena, have over the years accepted thousands of dollars in contributions from department employees.

For years, allegations of favoritism based on political contributions have dogged the Sheriff's Department.

The sheriff received at least $97,850 in contributions to his campaign committee from department donors from 1999 to 2011, according to a report issued last year by a county commission created to examine jail violence.

The commission also found that Tanaka received more than $108,311 for his city of Gardena political campaigns from 1998 to 2011. Tanaka's acceptance of such donations was the subject of reports by WitnessLA, a website dedicated to social justice news.

Several sheriff's officials told the jail commission that there was a perception within the department that contributions, to Tanaka in particular, were key to getting promoted. One captain testified that he got a call from another sheriff's employee who was soliciting donations for Tanaka's mayoral campaign, and that the employee informed him that captains were "expected" to give $250.

Creating a formal policy to address campaign contributions was among the recommendations the jail commission put forth last year.

"Honesty, integrity and fairness are enduring principles and serve as the foundation for our department's core values," Baca wrote in the memo. "These principles ... can be tested when exposed to the dangers posed by a conflict of interest. A conflict of interest — either real or perceived — can have a lasting impact and lead to a disruption in the workplace."

He added that "the expectations placed upon our leaders are greater than at any other time in our department's long, rich history. Please join me as together we embrace the opportunities that lie ahead. Nothing less than the public's trust is at stake."

Baca's spokesman, Steve Whitmore, said campaign contributions have never affected personnel decisions, but the new policy would prevent the perception that they do.

Whitmore said he doesn't think Baca would be returning the campaign contributions he has received from his employees over the years.

smf: This seems so obvious to me; why are the politicos so oblivious to the appearance of conflict of interest?  Maybe those numbers about who donated and who got promoted are coincidental. The difference between coincidental and circumstantial evidence is thin  …but one never wants a judge or jury or an angel at The Gate  to be weighing it.

Or the media or the crackpot blogosphere or the  electorate-at-large.

In a total lack of fairness and an abundance of partisan zeal let us look at just two who contributed to the campaign of Monica Garcia, candidate for reelection to the Board of Education: