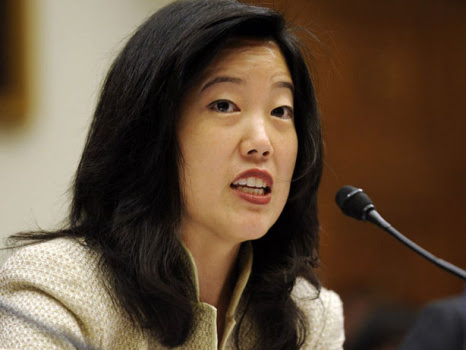 February 20th, 2013, 6:23pm  ::  Add former Washington, D.C. schools chancellor Michelle Rhee to the list of out of towners weighing in on the LAUSD school board race--financially speaking.

Rhee was in town for a panel discussion at the University of Southern California, where she announced a $250,000 donation to a PAC supporting charter-friendly candidates, the Coalition for School Reform.  She disclosed the donation after the event in response to a reporter's question about Rhee's picks for L.A. school board.

The university's Jesse M. Unruh Institute of Politics put on the event, which aimed to address the "future of California’s K-12 educational system." About 120 people attended, according to USC officials.

Catherine Shieh studies politics at USC and sat on the panel. She said the conversation touched on big issues in California like teacher evaluations and school spending.

"She fascinates so many people on such a large spectrum," Shieh said, adding that Rhee helped to  make California's education challenges feel more manageable to the audience. "Her presence is very inspiring to a lot of people. She keeps marching up to the forefront ... She looks for new opportunities to find solutions."

Rhee is the Founder and CEO of Students First, an education reform advocacy group based in Sacramento.

She's also promoting her new book, “Radical: Fighting to put students first,” which was released earlier this month. A review in the Washinton Post said the book offers some interesting coming of age details but has "holes in the account of her centerpiece accomplishment: the groundbreaking 2010 labor contract."

Rhee was the recent subject of a Frontline documentary that examined how her district handled allegations of test tampering at schools. Filmmaker John Merrow talked to KPCC's Alex Cohen last month.