GIVING KIDS A VIEW TO A BETTER FUTURE

In one year, Vision To Learn, a nonprofit mobile eye lab, has given eye exams to 5,000 students and handed out 4,000 pairs

of glasses. 'A $20 pair of glasses can change your life,' its founder says. 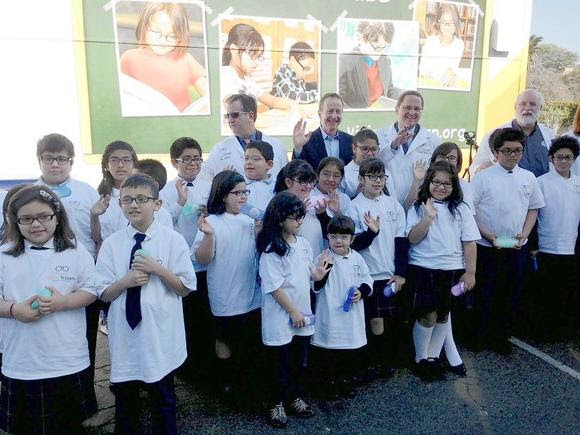 Students at Dolores Mission School in Boyle Heights get free eyeglasses from Vision to Learn, a nonprofit established by Austin Beutner, third from right in the back row. (Los Angeles Times / February 4, 2013)

February 5, 2013, 9:10 p.m.  ::  Bosko Magana, a 10-year-old fifth-grader at Dolores Mission School in Boyle Heights, began noticing about a year ago that her world was getting a little fuzzy around the edges. But eyeglasses didn't fit into the family budget.

Joanna Hernandez, 13, already had glasses, but for the last several months, they weren't strong enough.

"I couldn't see the board very well," she said.

On Monday morning, a mobile eye lab from Vision To Learn, a one-year-old nonprofit, rolled onto the Dolores Mission campus and students were called up, one at a time, to claim their new, free glasses. Bosko, Joanna and Eugene were among 31 students who got specs, and after a ceremony, some of their classmates lined up outside the van for eye tests.

At Catholic and L.A. Unified Schools throughout Los Angeles, kids are seeing better because Austin Beutner, a former investment banker and deputy mayor who lives in Pacific Palisades, was shocked by what he heard from an acquaintance.

"An educator who I know came up to me and said about 15% of the kids in public schools can't see the board," Beutner said. "I asked around and said, well, this seems like a problem we can solve, so I went out, bought this vehicle, hired some doctors, put together a team."

In less than a year, Vision to Learn has tested 5,000 students and distributed almost 4,000 pairs of prescription glasses. Beutner said his research suggests that 30,000 to 40,000 elementary school students in the city need glasses, and that 60% of so-called problem learners are visually impaired.

"They get fidgety. They can't pay attention. Think about the life track that puts them on, versus a simple fix — glasses."

Karina Moreno-Corgan, the Dolores Mission principal, told me that about a third of the school's 240 students were in need of glasses.

"We did screenings, or a teacher was able to tell because of squinting or something else," Moreno-Corgan said.

But in many cases, the parents' health coverage didn't include vision care, or they had no health insurance at all and couldn't afford glasses. Or, she said, the healthcare bureaucracy was impossible to negotiate.

"This is unfortunately a symbol of the problems with the larger healthcare system and the way it segments people out and divides service," said Steven P. Wallace, a professor of public health at UCLA.

Vision care, dentistry and audiology are "the stepchildren of the medical system," Wallace said, and it's particularly difficult for low-income people to get those services, even though they're essential to growth and development. Fall down and break an arm, Wallace said, and the system works. But short of an emergency, good luck.

"Some children don't even realize" they have vision problems, optician Sherry Pastor told me as more students were being tested in the van on Monday. "They lose interest in school, their grades fail, they become outcasts because they're not learning at the same level as the other children. It's amazing to know, once they get glasses, how differently they see the world. They can actually read a book and enjoy it and not get frustrated."

We live in a city that offers unlimited world-class medical resources and easy access for the more fortunate among us. On the elective side of the industry, you can get a colonic in the morning, a facelift in the afternoon and choose from a thousand anxiety specialists if you don't like the results. Across the highway and into the next area code, kids are lined up outside a van because they can't see the blackboard.

"Sometimes I have to be telling the teacher, 'Can I move up?'" said Fernando Variente, 12, who told me he has trouble reading his assignments. He was waiting in line with Leslie Alcon, 12, who said she's been nearsighted for about four years.

On Monday, Father Greg Boyle, who was once assigned to the Dolores Mission Church, encouraged students to think more broadly about the word "vision." To some, it's the ability to read a book, to others, it's the dream of a community in which everyone matters equally, and help is provided to those in need. Vision To Learn has gotten backing from the William Hannon Foundation, former Mayor Richard Riordan, City National Bank, the Adamma Foundation, Sony Pictures Entertainment and the Rotary Club of Westchester, among other groups. If you'd like to volunteer or donate — or to set up a visit at your school — go to http://www.visiontolearn.org.

Emily Plotkin, Jamie Chang and Alex Radan — all of them seniors at the exclusive Harvard-Westlake School in Studio City — were helping out Monday at the eyeglass giveaway. Emily, head of her school's community council, a service organization, said they planned to hold a dance at their school to raise money for Vision to Learn. She said she felt both fortunate to go to Harvard-Westlake and inspired by the students at Dolores.

Inside the van, Beutner told me he met a teacher a couple of weeks ago who told him a story about a bright fifth-grader with an erratic academic record. The girl would test gifted one year, not the next, then gifted again, then not.

"They went back and looked, and it was a single-parent household. The mother was in and out of work, and when she could afford it, the kid had glasses, and when they couldn't afford it, they didn't have glasses," Beutner said. "A $20 pair of glasses can change your life."