2/27/2013 07:19:08 PM PST  ::  Write-in candidate Jeneen Robinson has ended her campaign for the District 4 seat on the Los Angeles Unified School District board, and is endorsing incumbent Steve Zimmer in Tuesday's election.

In an email to her supporters, the 40-year-old minister and mother said the flood of outside expenditures - which topped $1.7 million on Wednesday - had made it impossible for her to compete in the democratic process.

After meeting with both Zimmer and challenger Kate Anderson, Robinson said she'd decided to back the incumbent.

"He is an upstanding guy who sincerely cares about our kids and collaborates with the community for improving education. He will keep our kids first," she wrote.

The Coalition for Education Reform is Anderson's chief outside backer, spending more than $900,000 to support her and oppose Zimmer.

Organized labor, led by United Teachers Los Angeles, has spent about $825,000 to get him re-elected. 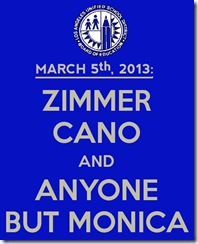