Thirteen recent child deaths might not have happened if Department of Children and Family Services social workers had taken basic steps to assess the risks, an investigation finds.

Vyctorya Sandoval died at 25 months old after “obvious indications of physical abuse were either ignored or not noticed” by Department of Children and Family Services social workers, an investigation found.

February 14, 2013 :: A stifling bureaucracy and inept workforce have crippled Los Angeles County's child protective agency, resulting in a system that allowed children to remain in unsafe homes, sometimes to die at the hands of their caretakers, according to a confidential county report.

The investigation, conducted by an independent counsel for the Board of Supervisors, looked at 15 recent child deaths and a torture case. In all but two instances, investigators found that casework errors began with the agency's first contact with the children and contributed to their deaths.

The report is the harshest assessment of the Department of Children and Family Services in recent memory, echoing complaints from child advocates that the county has rejected for years.

DOCUMENTS: The report on child deaths

Investigators largely blamed the department's problems on its decision to place its least experienced social workers in its most crucial job: assessing dangers to children. Many of those workers — facing a total of 160,000 child abuse hot line calls each year — are "just 'doing their time,'" according to the report.

Supervisors are poorly qualified and often disregard policy, creating a situation akin to "the blind leading the blind," with workers rarely held accountable for "egregious" errors, the report said.

The result has been deaths that might have been prevented had social workers taken basic steps to assess the risks.

Two-year-old Abigail, for example, was returned to her parents after social workers failed to look into their extensive abuse history and question their weekend stays in jail for prior offenses.

A month later, Abigail was found dead, covered in bruises that the parents allegedly attempted to conceal with blue paint.

Viola Vanclief, 2, allegedly was killed by her foster mother, Kiana Barker. Before Viola's death, the county's child abuse hot line received seven complaints about Barker. Each time, the investigating social worker was unaware of the previous calls, according to the report, which was obtained by The Times through a source.

Philip Browning, who became the agency's permanent director two months before the report was completed in April, recently embarked on a reorganization involving new assignments, training and procedures for many of the department's 6,800 employees.

The report's lead author, Amy Shek Naamani, has been hired by Browning and placed in a senior position to help guide the effort.

The four-year blueprint for reform — the first comprehensive effort in a decade — covers many of the recommendations outlined in the report. Browning said his goal was to restore "common sense, accountability and critical thinking" to the county's child welfare network.

"It's important for people to know that this can't happen overnight," he added.

The report found that many of the department's errors were rooted in its guiding strategy to keep children with their families and avoid "detention" — putting them in foster care.

Though that preference is necessary when the child is not at substantial risk, social workers became blind to dangerous family situations, according to the report.

"Individual offices and leadership [within the agency] celebrated as their number of detentions decreased and individual social workers were praised for low detention numbers; all while more children were dying while left in their parent(s) care," the report said.

Investigators focused on weaknesses in the department's emergency response section, which looks into complaints to the child abuse hot line and often is the first posting for rookie social workers.

The report found a "general lack of skill" among those caseworkers. Rules requiring master's degrees in social work have been waived for half of the department's frontline personnel and all of their supervisors.

Once hired, "every warm body" was "passed through" by the department's training academy, spending just four hours learning how to pull information from often reluctant subjects, the report said.

Investigations tend to rely on bureaucratic rules, not common sense and close observation, the report found. The department has issued more than 4,000 pages of policies detailing how social workers should do their jobs.

"Creating social work road maps with this level of 'how-to' is like expecting a therapist to use a script that tells her what questions to ask and what responses to expect from her client in a therapy session," the report said.

Lowell Goodman, a spokesman for the union representing the social workers, said, "Even the finest social workers in the country could not perform their best work in this system."

"Paperwork and the relentless attention to following [thousands of pages of] policies supersedes hands-on social work in importance," he said.

The report found that some basic steps to determine the safety of a home are ignored.

In one torture case cited in the report, a caller said a young boy, Johnny, was being beaten and underfed by his drug-addicted mother.

Social workers scheduled five drug tests for the mother, according to child welfare records. She missed or refused every one. They scheduled meetings to discuss the matter. She missed those too.

Without interviewing key witnesses, including the person who was identified as the likely caller to the hot line, social workers closed their inquiry and declared that the child was not at risk.

Three years later, police went to the mother's home following another tip. They found Johnny in a dark closet. Much of his body had been burned by a glue gun and hot spoons. He had been starved, sodomized, punched and forced to eat feces.

And in the case of Vyctorya Sandoval, "obvious indications of physical abuse were either ignored or not noticed," the report said.

Over a seven-month period during which social workers visited the home, the child lost almost half of her body weight and clumps of hair fell from her head.

She died when she was 25 months old. A rib was fractured. Blood tests suggested she had been thirsty and hungry.

Among the fatal cases reviewed, only one worker — who had falsified a report — was fired.

"Other than that, despite the egregious nature of many of the mistakes made by workers, the most serious discipline has been one 30-day suspension," investigators said.

Browning has transferred or demoted many top managers since the report. More than 30 people are being added to the staff to monitor foster care contractors for fraud and abuse. He has promised to restore the agency's emergency response section as a place for elite, higher-paid workers.

He also has eased the department's focus on keeping children out of foster care. Last year, the agency filed 14,785 court petitions, most of them for removing children from their families — an increase from 13,481 the year before.

Efforts to streamline policy manuals and raise standards across the entire department won't be finished until 2015 under the plan approved by county supervisors.

"This is going to be hard work," Browning said.

It isn't just the child protection agencies that are blind. All of us bear responsibility for the welfare of our children.

While we wait for administrators of the "stifling bureaucracy and inept workforce" at the Los Angeles County Department of Children and Family Services to sort things out, innocent children continue to suffer.

I recall a friend who was scolded by a neighbor for calling a child protective agency on a suspected abuser. She was asked how she would have felt if someone had called an agency on her. My neighbor's response was that if she were sick enough to abuse a child, she would pray someone would report her.

Neighbors, families and friends must call and call again to save a child. 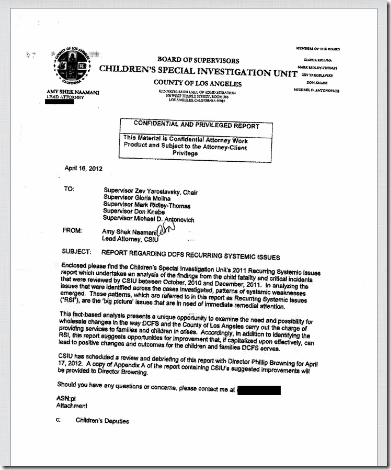