By smf for 4LAKids

“The Teachable Moment” has become an educational cliché. If ever there was a person who seized a number of teachable moments and wrestled them to the ground, it was Surgeon General C. Everett Koop, 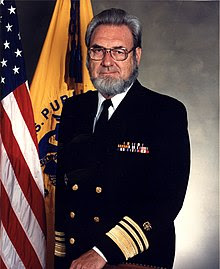 When Dr. Koop was named as surgeon general by President Reagan his appointment was opposed by liberals and progressives because of his public reservations about abortion. When he left office he was a figure beloved+respected by all ….with the exception of Big Tobacco. The picture of Dr. Koop with his Yankee chin whiskers and naval officer's uniform (The Chief of the US Public Health Service is a Navy Vice Admiral) is the image of The Surgeon General. He looked like Captain Ahab – not Ahab undone by his nemesis whale but Ahab promoted to admiral – and Koop’s mission against tobacco smoking makes Melville’s Ahab look like Caspar Milquetoast.

Before he came to Washington Dr. Koop was practically the inventor of neonatal surgery – as the savior of thousands of infants (and through education and pioneering technique millions) – how could he not be opposed to abortion? Yet Koop balked at the Reagan Administration’s request that he oppose abortion on medical grounds – he contended it was a moral issue and not an issue of public health.

In his term as Surgeon General tobacco use began to wane– it has declined every year since. Koop informed, he educated and he did holy battle against tobacco. He did what leaders do: He led. Smoking isn’t just bad – it is evil … in a purely public health sense.

Koop was every bit as successful in initiating the fight against AIDS-HIV. The disease was preying on Haitians, homosexuals and drug addicts – social outcasts – but Koop educated us all that the epidemic was our epidemic – and that its victims were our brothers and sisters. The vengeful judge doing battle with his terrible swift sword became the scholar-priest with the lamp of knowledge – enlightening us all.

We continue Koop’s mission in education today in Tobacco Use and Prevention Education (TUPE) and AIDS/HIV Education – embedded in the curriculum – every bit as important as Language Arts, Math or Science, Only more so – few die from failure at algebra.

Dr. Koop was first and always and ultimately a pediatrician. After that he was a teacher - and he taught not just an entire generation but across generations. He saved and changed lives well beyond his own generation and into future generation.