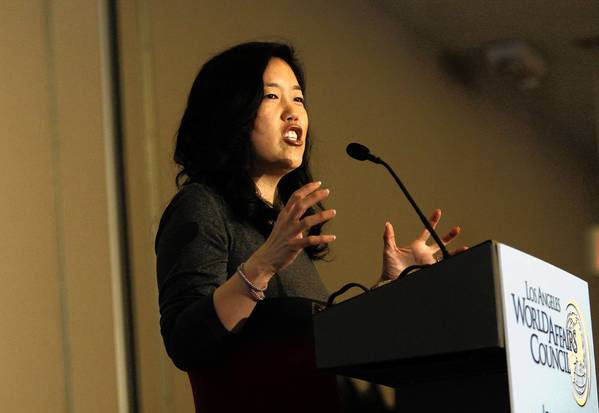 February 20, 2013, 7:34 p.m.  ::  A group led by former District of Columbia schools chancellor Michelle Rhee donated $250,000 Wednesday to contests for seats on the Los Angeles Board of Education, adding further political fuel to a battle over the direction of reform efforts in the nation's second-largest school system.

The support of StudentsFirst, which is based in Sacramento, will benefit an independent campaign on behalf of school board President Monica Garcia as well as Kate Anderson and Antonio Sanchez, who are seeking to join the seven-member body.

The L.A. teachers union is mounting an opposing campaign in two of the races.

Rhee has become both a controversial and influential figure in education-reform debates. Her group has lobbied lawmakers and donated to campaigns across the country; it works primarily at the state level to influence policy.

Rhee's donation follows a $1-million contribution to the same candidates made by New York City Mayor Michael R. Bloomberg last week. The independent campaign, with resources of more than $3 million for the March 5 election, is being managed by the Coalition for School Reform, which is closely allied with L.A. Mayor Antonio Villaraigosa.

"This is just another example of outside 'reformers' trying to influence the outcome of the Los Angeles school board races," Warren Fletcher, president of United Teachers Los Angeles, said in a statement. Voters "do not need outsiders deciding who is best to sit on the LAUSD Board of Education."

"We think it's important that John Deasy be able to continue on the job to finish the work he started," she said.

Deasy is developing an evaluation system that incorporates the use of student standardized test scores as one measure of an instructor's effectiveness. Last week, he directed principals to count test results as 30% of an evaluation. He also has altered district rules so that layoffs are not based strictly on seniority.

In District 4, Anderson, a parent and an attorney, is trying to unseat incumbent and former teacher Steve Zimmer.

Zimmer has frequently voted for Deasy's proposals, but the superintendent's closest backers have clearly thrown their support to Anderson. Deasy's critics are now lining up just as visibly behind Zimmer.

Through Wednesday, outside spending in District 4 had surpassed $1 million, divided evenly between money spent on behalf of Zimmer and Anderson. Anderson's own campaign fundraising has outpaced Zimmer's: $130,000 to $31,000.

Independent spending, including some from unions, on behalf of Sanchez in District 6, an open seat, has swamped the resources of opposing candidates Monica Ratliff and Maria Cano. Spending by and for Garcia has done likewise in District 2, although the teachers union hopes to force the incumbent into a runoff. Her challengers are Isabel Vazquez, Robert Skeels, Annamarie Montanez and Abelardo Diaz.