The schools of L.A. for sale to the highest bidder?: N.Y. MAYOR GIVES $1 MILLION TO BACK L.A. SCHOOL BOARD SLATE

Michael Bloomberg aims to retain a majority that has pushed for ®evamping teacher policies, an effort also supported by L.A. Mayor Antonio Villaraigosa.

smf: “…also supported by…”?  …the Times says the deal was ‘brokered’ by Mayor Tony! 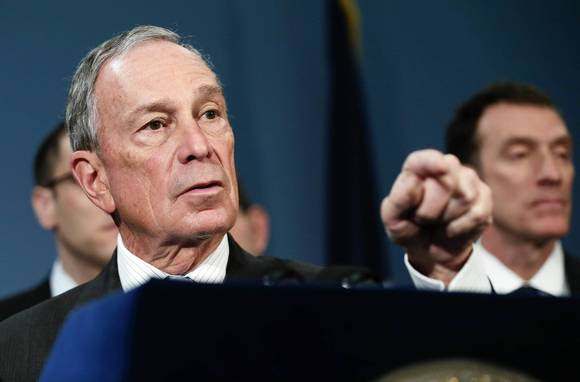 New York Mayor Michael R. Bloomberg has donated $1 million to help preserve a Los Angeles Board of Education majority that has pushed for several controversial efforts that are supported by the L.A. mayor and the superintendent. (Mario Tama / Getty Images / February 6, 2013)

February 12, 2013, 11:51 p.m.  ::  New York Mayor Michael R. Bloomberg has donated $1 million to help preserve a Los Angeles Board of Education majority that has pushed for several controversial efforts dealing with teachers — including remaking evaluations and speeding the dismissal process — that are supported by the L.A. mayor and the superintendent.

Brokered by L.A. Mayor Antonio Villaraigosa, the contribution to the Coalition for School Reform is the largest on record — by far — to support school board campaigns. The group is planning to spend the money on behalf of one incumbent, school board President Monica Garcia, and two others, Kate Anderson and Antonio Sanchez, in the March 5 election.

The donation could immediately skew election spending on behalf of those backed by Villaraigosa and the relatively small group of donors in the coalition, who have now collected more than $2.5 million. It is seeking both to protect Supt. John Deasy's policies and to override the historic influence of the teachers union, United Teachers Los Angeles.

"Michael Bloomberg threw down the gauntlet today," said Dan Schnur, director of the Unruh Institute of Politics at USC. "He's obviously very serious about changing education in America, and Los Angeles is now ground zero for that effort."

He added: "This is a game changer."

The efforts to revamp policies in L.A. Unified mirror those occurring nationwide over such topics as the growth of charter schools and the proper role of standardized testing as well as teacher evaluations and job protections.

Coalition employees had been in contact with Bloomberg's staff in advance of a U.S. Conference of Mayors gathering in Washington last month. Villaraigosa talked to Bloomberg about Deasy's leadership and the risk of losing a majority on the school board, coalition campaign manager Janelle Erickson said.

L.A. is a notably different education landscape than New York, where the mayor controls the school district. Villaraigosa unsuccessfully sought such authority when he took office eight years ago. In New York, Bloomberg has used his powers to close low-performing schools and accelerate the growth of independently managed charter schools. He also released the individual ratings of teachers based on student test scores and pushed for a new evaluation system that uses these results.

"Mayor Bloomberg is the most important voice in education reform today," Villaraigosa said in a statement.

"The mayor has said he's going to support efforts and candidates around the country on the issues that he cares about and education reform is one of the issues at the top of that list," Bloomberg press secretary Marc LaVorgna said.

But the largess of Bloomberg, a billionaire businessman outside of public office, was met with dismay in some quarters.

"The prospect that the mayor of New York City might use his vast wealth to choose the school board for the people of Los Angeles is repugnant and an affront to democracy," said education historian Diane Ravitch, a critic of Bloomberg's education initiatives.

Before Bloomberg's intervention, the largest donations were $250,000 each by arts and education philanthropist Eli Broad and Latino media magnate A. Jerrold Perenchio.

The coalition said it had reviewed records dating to 1999 and could find no other contribution larger than $250,000.

In Los Angeles, Deasy's agenda has resembled that of Bloomberg, although Deasy has opposed the release of individual teacher ratings and has rarely converted low-performing campuses to charter schools. L.A. has more charters than any other school system in the nation.

The most direct competition between the coalition and the teachers union is over District 4, which stretches from the Westside to portions of the west San Fernando Valley. That race pits one-term incumbent and former teacher Steve Zimmer against lawyer and parent Anderson.

The teachers union said it is undaunted by Bloomberg's cash.

"Our strategy is unchanged," union Vice President Gregg Solkovits said. "We expected to be outspent."

A union statement called the donation "yet another example of outsiders trying to influence the outcome of the election."

The union is far from defenseless; it can call on its corps of teachers to make its case, and the union, too, has a war chest, with about $700,000 remaining, according to the union. To support Zimmer, United Teachers Los Angeles also has the backing of other employee unions, the L.A. County Federation of Labor and the Democratic Party.

Zimmer's unwillingness to replace Deasy has helped the superintendent survive a partial erosion of support on the board. But Villaraigosa and his allies want to solidify Deasy's standing. And in this election, Zimmer is relying on a teachers union that has battled Deasy. Zimmer's opponent, Anderson, has stressed her support for the superintendent.

Zimmer said Tuesday that he looks forward to an opportunity to "sit down with Mayor Bloomberg, go through my initiatives and voting record, so I can understand why it would be worth him investing his money in this board race."

In District 2, which is centered downtown, the coalition supports incumbent board President Garcia. The teachers union is trying to force Garcia into a runoff and has begun spending funds to oppose her but not to support any particular opponent.

District 6 is an open seat representing the east San Fernando Valley. There, the coalition is spending on behalf of Sanchez. The teachers union has endorsed all three candidates in that contest, including Sanchez, but has not spent on behalf of anyone.

2/12/2013 11:32:25 AM PST  ::  The Coalition for School Reform, which is supporting a slate of candidates in the March 5 primary for three LAUSD board seats, announced today it had received a $1 million donation from New York City Mayor Michael Bloomberg.

The donation nearly doubles the total reported in the coffers of the Independent Expendture Committee, which is supporting incumbent Monica Garcia in District 2, challenger Kate Anderson in District 4 and candidate Antonio Sanchez in District 6.

Garcia faces three challengers in her bid for re-election, while Sanchez is facing off against two other candidates in the race to succeed board member Nury Martinez, who is not running. Anderson is challenging board member Steve Zimmer.

By Diane Ravitch in her blog | http://bit.ly/12fNOhD

Mayor Michael Bloomberg of New York City, a multibillionaire, is giving $1 million to support three candidates in the Los Angeles school board election.

The candidates he is backing are in favor of privately managed charter schools and are generally anti-union.

The people of Los Angeles will decide in next month’s election whether the super-rich elite can buy control of the public school system and impose their pet project of privatization.

This bold effort to buy the school board is an affront to democracy.

Are the public schools of Los Angeles for sale to the highest bidder?