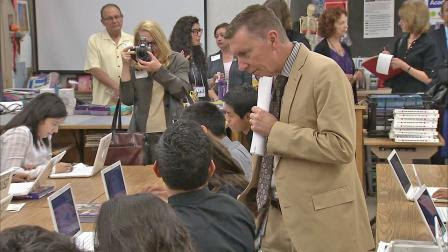 LAUSD Superintendent John Deasy and the district came up with a solution just as the Board of Education was scheduled to vote on layoff notices for more than 200 school counselors, psychologists and social workers.

It suggests funding the $20 million intended to pay for staff jobs from the district's general fund, rather than individual school budgets.

"I could not possibly support sending layoff notices at this given time," Deasy said in a statement. "These support services personnel are vital to the health and well-being of our students."The board approved the amendment with a 7-0 vote, saving 194 full-time jobs and 14 part-time jobs.

"We have and will continue to support our district employees so they can teach, inspire, support and create a successful learning experience for every student," Deasy said, "whether they are based at schools or the central office."

smf: I don’t know what school board meeting ABC News went to Tuesday – but that ain’t the way it happened!

The choices are connected by “or”!

The agenda,  gentle readers,is to make most employees subject to annual RIF notices in March and lay-off  or rehire in June - with the decisions made locally by administrators and school site councils based on the budget and market forces. It’s one of those best practices learned from “right-to-work” states and well managed Charter Management Organizations.

* She showed up within minutes of the item being dropped.