WHAT SCHOOLS+PARENTS NEED TO KNOW ABOUT THE NEW VACCINATION LAW 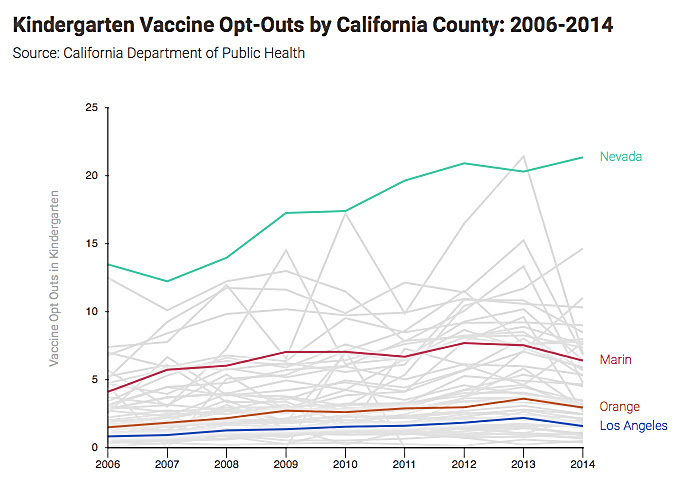 How many kindergarteners opted-out of vaccinations at your school? Click for the database.

Jul 1, 2015 | Now that Gov. Jerry Brown has signed into law – which he did on Tuesday – a bill that says parents can no longer refuse to vaccinate their children based on their personal opposition, schools and parents are parsing the fine print to put the new law into practice.

The law, Senate Bill 277, will roll out in phases, giving school staff time to sort out vaccination compliance issues and parents who oppose full immunization time to sort through their options.

Most school districts in California will be affected, with 47 out of 58 California counties in 2014-15 reporting they had kindergartners with personal belief exemptions to school-required vaccinations. (To find out how many kindergartners opted out of vaccinations at your school, click here.)

What does the law say?

If the Legislature votes to add other vaccination requirements, parents will be allowed to obtain personal belief exemptions for those new vaccinations, the law says.

What did the law change?

Are there exemptions to the new law?

Yes, there are three: medical, special education and homeschooling or independent study.

A child who has an individualized education program, as required under the Individuals with Disabilities Education Act, will be allowed to obtain special education services regardless of whether the child is vaccinated or not.

The law states that the vaccination requirements do not apply to students who are enrolled in a home-based private school or an independent study program. Some questions remain about whether students enrolled in independent study through publicly funded district or charter schools would be exempt from complying with the law; the issue will be clarified in guidance from the California Department of Public Health.

When does the law go into effect?

Will kindergartners be allowed to enroll “conditionally” if they have not yet completed the required vaccinations?

Yes. School districts already have their own systems for tracking and following up with kindergartners who are not fully immunized. Whatever systems districts are currently using will remain in place.

What about children who currently have personal belief exemptions on file?

Children who hold personal belief exemptions to vaccinations before Jan. 1, 2016 are “grandfathered in.” The new law does not apply to them until they reach their next vaccination checkpoint – kindergarten or 7th grade.

If it is determined that a child has been exposed to one of the 10 diseases named in the immunization requirements and does not have proof of immunization, the child may be temporarily kept out of school.

Will unvaccinated children who move from one California school or district to another have to meet the vaccination requirements of new students?

Newly enrolled students are required to be up to date on immunizations. Whether the personal belief exemption will travel with students relocating within California is thought to be likely, but will be clarified in forthcoming guidance.

What vaccinations are required of unvaccinated students before entering 7th grade?

As of July 1, 2016, all students entering 7th grade will be required to have the pertussis vaccination.

It’s not yet clear what, if any, other vaccinations those previously unvaccinated students may have to receive – but it won’t include the hepatitis B vaccination, which is given in a series of three shots. The law specifically states that full immunization against hepatitis B is not a requirement for entering 7th grade. The issue will be clarified in the forthcoming guidance from the California Department of Public Health.

What are the options for parents who do not want to have their children vaccinated?

Parents who do not want to vaccinate will have two options for their kindergartners and seventh graders starting in fall 2016: obtain a medical exemption to vaccinations or enroll in homeschooling or independent study.

What is homeschooling and independent study?

According to the California Homeschool Network, parents who wish to homeschool have four options: