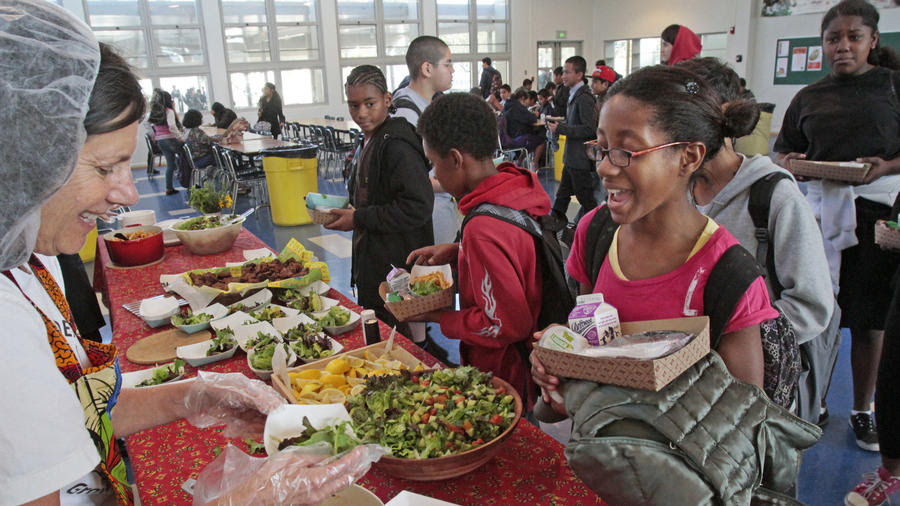 “The district takes these findings very seriously,” he said in a statement with Thelma Melendez de Santa Ana, head of the educational services office.

Cortines said he was particularly concerned about the lax oversight of a school meal marketing program funded by food vendors. The program was created in 2010 by Dennis Barrett, the former food services director who now works for the New York City Department of Education.

To win the contracts under the new system, vendors agreed to contribute more than $1.5 million to promote the district’s healthful food initiatives and educate students about nutrition.

But the audit raised questions about some of the vendor payments: $117,500 to philanthropist Meg Chernin’s Los Angeles Fund for Public Education, $65,000 to place Los Angeles Dodgers photos on school milk cartons, $6,800 for employee travel and conferences, and $581,000 to two Los Angeles public relations firms, RL Public Relations and Tatum Wan Co., among others.

The district axed the marketing program this year. Officials have also strengthened its supervision of food services staff members, improved oversight of purchasing and new menu additions and returned to competitive bidding, among other changes, the Cortines statement said.

Board of Education President Steve Zimmer said he would withhold comment until the board could meet to review the findings.

Fallout over the program has ensnared David Binkle, the district’s nationally known food services director, who has been removed from his post and ordered to stay home. Auditors found potential ethical breaches involving a private consulting firm he runs and a failure to report vendor-paid travel to food conferences.

Binkle has denied any wrongdoing and said all travel and marketing activities were legal, specified in the vendor contract proposals and approved by his superiors.

He declined to comment Tuesday until he could review the audit.

Binkle, a professional chef who joined the district in January 2008, helped adopt cutting-edge menus lower in sodium and fat, introduced breakfast and supper programs, increased meals served by 76,000 daily and promoted directives from the federal government and L.A. Unified Board of Education for healthier food.

In an earlier interview, George Silva, L.A. Unified’s procurement chief, said the district would no longer ask vendors to directly contribute money to promote school food. Instead, they would be asked to provide opportunities for student class projects on the food industry, field trips, workplace tours, online exchanges and other activities combining academic study with occupational training through the district’s “work-based learning partnership” program.

July 15, 2015  ::  A prestigious nonprofit support group affiliated with the nation’s second-largest school district, with a high-profile staff and blue-ribbon board of directors, found itself in the middle of a scandal over waste in Los Angeles Unified School District’s food program.

An audit of L.A. Unified’s food services program, released by the district’s inspector general, reveals “swanky hotel stays, cozy relationships with contractors and millions of dollars in waste,” according to a report in the Los Angeles Daily News.

The audit singles out the food services director, who has been collecting an annual salary of $152,000 while on paid leave for more than five months. David Binkle established a reputation as a promoter of healthy eating, appearing at the White House with first lady Michelle Obama.

According to the audit, the $341 million-a-year program had problems that can be traced back to the district’s decision to let food services forgo standard contracting practices in 2011, on the belief that administrative costs would be lowered. That gave Binkle almost complete control over millions of dollars in contracts, and the paper reports that he used that power to give preference to contractors who showered him with perks.

Those perks were not reported on forms mandated by state law. In addition, Binkle failed to disclose his food consulting company, which made more than $950,000 per year, according to the audit.

Money was spent from the district’s marketing fund to pay key executives at the nonprofit L.A. Fund for Public Education $117,500 to promote the district’s controversial breakfast program, which it features prominently on its website. The Fund is a blue-chip support group for L.A. Unified, whose board includes the mayor, the publisher of the Los Angeles Times and a number of entertainment industry bigwigs. The group says on its website that it “builds innovative partnerships to create solutions that will improve the educational, health and wellness outcomes for students in Los Angeles.”

Binkle denied authorizing the payment, claiming that the nonprofit was authorized to spend tax dollars without his permission. The Fund denied that, and said it had no direct involvement with the program because the individual executives worked directly for the district.

The audit also revealed that the district overpaid for meals provided by one favored contractor, which paid for airfare and hotel costs for district employees to attend a food conference, a violation of the district’s ethics policy.

The Daily News reports that LAUSD Superintendent Ramon Cortines says he has taken steps to prevent future ethical breaches and mismanagement. The audit also says that the food services department’s operating deficit more than tripled between 2010 and 2013, even though the district served 900,000 fewer meals, meaning that the cost of food increased 41 percent.

Some of that is due to buying the healthier food Binkle and the L.A. Fund promoted, but the inspector general said that the bulk of the increase was due to lax contracting practices, ordering too much food, duplicating orders and carrying excessive inventory. At the same time, the paper reports that about one-fifth of food served was wasted, even though food offered free by the USDA wasn’t ordered on time.—Larry Kaplan

Posted: 07/15/15  ::  Swanky hotel stays, cozy relationships with contractors and millions of dollars in waste were uncovered by an audit of Los Angeles Unified’s food services program, which was released by the district’s inspector general on Wednesday.

At the center of the audit is Los Angeles Unified Food Services Director David Binkle, who has been collecting an annual salary of $152,000 while on paid leave for more than five months.

A champion of health eating, Binkle has appeared at the White House alongside first lady Michelle Obama and starred in Tedx Talks.

But according to the audit, the $341 million a year program under his direction was anything but healthy. Problems can be traced back to the district’s 2011 decision to let food services forgo standard contracting practices with the expectation that administrative costs would be lowered.

The decisions to forgo standard practices left Binkle with near complete control over millions of dollars in contracts. He used that power to grant price increases, change orders and modify menus for contractors who paid for him to stay at a swanky hotel in Beverly Hills and, at his request, covered the cost of airfare and lodging for a conference, according to the audit.

Those costs went unreported by Binkle on forms that are mandated by state law. Binkle also failed to disclose his food consulting company, which he formed after starting work for the district in 2007. His company made more than $950,000 per year, according to the audit.

The audit said the company Gold Star Foods covered Binkle’s costs for a night at the Hotel Palomar in Beverly Hills. The money was later reimbursed through the district’s marketing fund, a $1.6 million fund with little oversight or documentation to show why money was spent.

Gold Star Foods was given a 15.5 percent cut of every dinner served by the district for no apparent reason, according to the audit.

The district could have bought meals at a 15.5 percent savings directly from FiveStar Gourmet Food, but after a discussion between Binkle and Gold Star Foods representatives, it was decided the district would pay 23 cents more for each dinner, raising the price of every meal from $1.20 to $1.48.

The district spent $12.1 million on serving dinner in 2013, according to the audit.

FiveStar Gourmet, meanwhile, shelled out $8,831 in airfare and hotel costs for two employees to attend a food conference. The payment was made at Binkle’s request and in violation of the district’s ethic’s policy, according to the audit.

The inspector general couldn’t figure out why other money was spent from the marketing fund. For instance, staff members of the nonprofit, The LA Fund, collected $117,500 to promote the district’s controversial breakfast program.

Binkle denied authorizing the payment, claiming The LA Fund was able to sign off on the spending of tax dollars. The LA Fund denied the claim, saying it had no involvement with the program and thought individual employees were contracted by the district.

In another instance, a company volunteered to print Dodgers players on milk cartons free of charge but later collected $65,000 for it. Binkle said he thought it was free of charge and the audit doesn’t state who agreed to the payment.

“The district takes these findings very seriously,” Cortines said. “We have alerted the Board of Education of these reforms, and will continue to provide updates.”

The audit also describes massive waste, as the food services department operating deficit more than tripled over three years leading up to the $78.6 million shortfall in 2013.

The increased budget reflects a 41 percent increase in the cost of food bought by the district. While the rising cost can partially be attributed to buying healthier food, the lax contracting practices led to a lack of competition and likely higher prices, according to the audit.

District officials also ordered too much food, duplicating identical orders and carrying inventories that were more than three times the recommended value of $3 million. Part of the problem was contracts that guaranteed a minimum purchase, according to the audit.

Meanwhile, up to 21 percent of food served went to waste, with an average of more than 9 percent over a three-week observation period, according to the audit.

While food the district was buying went to waste, vegetables, canned goods and other food offered free by the USDA weren’t ordered on time, compounding the cost of meals and waste, according to the audit.