By The Los Angeles Times Editorial Board | http://lat.ms/1HgK0in 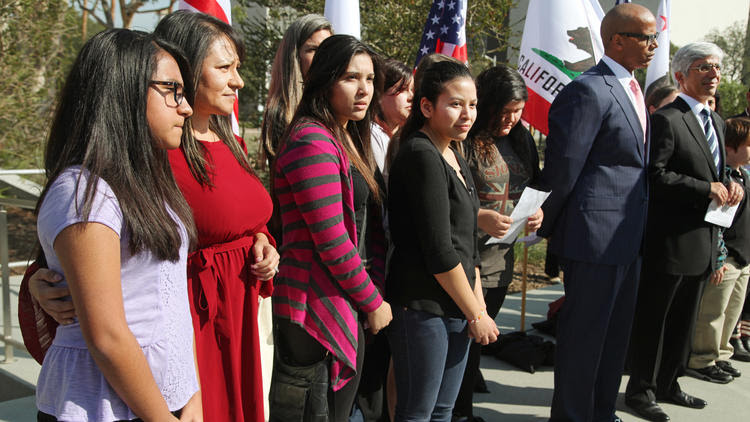 Nine California public school students ( and one Silicon Valley billionaire)  sued the state to abolish its laws on teacher tenure, seniority and other protections. Above, the students with their lawyers in downtown L.A. on Jan. 27, 2014.

8July2015  ::  Lawsuits aren't the best way to improve schools. But sometimes they're the only way. A couple of cases in point: A lawsuit filed in 2000 on behalf of disadvantaged California students resulted in hundreds of millions of dollars in additional state money for textbooks for schools. Another, filed in 2014, forced the Los Angeles Unified School District to place students at Jefferson High in real classes rather than warehousing them in do-nothing study halls.

It shouldn't be the responsibility of the courts to compel basic changes in California's unreasonable teacher tenure and layoff rules. Yet Democratic lawmakers have once again shied away from passing common-sense measures to do so, sinking two GOP bills early on in the legislative process.

Which brings us to Vergara vs. California. A year ago, a lower court judge ruled for the plaintiffs in that case, agreeing that the state's laws on teacher firings, tenure and last-in-first-out layoffs harmed the quality of education to the point that they violated students' rights under the state Constitution. With the Vergara ruling under appeal, the Legislature could have taken steps to address the problem during the current session — but the Democrats who control both houses appear unwilling to do so unless and until the courts force them to.

The Vergara decision might well be overturned. The lower court judge based his opinion on estimates that 1% to 3% of teachers are ineffective at their jobs. It's unclear how he saw that small number — if it's even accurate — as harming the quality of education so horrifically that it's unconstitutional.

Whether or not the policies on teacher seniority and tenure violate the Constitution, they're still bad policies.

But that shouldn't matter. Whether or not seniority and tenure rules violate the Constitution, they're still bad policies. In giving principals only 16 months to decide whether a new teacher should get tenure, California is out of step with most states. One of the bills simply would have given principals an extra year, allowing them more time to fully evaluate new teachers.

Right now, when schools must lay off teachers, seniority generally determines who stays and who goes. This has too often meant that excellent new teachers lost their jobs while underperforming teachers with more experience kept theirs. Seniority should play some role in layoffs, lest administrators decide to rid themselves of veterans just to save money, but a bill that would have preserved seniority as just one of several considerations struck the right balance. It too failed to pass.

Lawsuits have at times been disruptive and costly, and they tend to target one issue at a time without regard for the bigger picture. But the Democrat-controlled Legislature, which has long been too deferential to the wishes of the California Teachers Assn., has repeatedly failed to make sensible changes that would benefit students while remaining fair to teachers. It may take more court edicts for that to happen.

“Yet Democratic lawmakers have once again shied away” “…..sinking two GOP bills early on in the legislative process”.   “But the Democrat-controlled Legislature, which has long been too deferential to the wishes of the California Teachers Assn….”   Excuse me, editorial board,  but your partisan politics are showing!

I remind the Times editorial board that those lawmakers and legislators, Blue+Red,  are the constitutionally elected representatives of the people. They are not the appointees that most judges are and all editorial board members are. "Democracy is the worst form of government, except for all those other forms that have been tried from time to time."  - Winston Churchill to the House of Commons, Nov. 11, 1947

Vergara is one judges' opinion. One judge. Judge Rolf M. Treu was first appointed to the West Covina Municipal Court in 1995 by Governor Pete Wilson. He became a judge of the superior court after the state's superior+municipal courts were unified. In 2014 Treu ran for re-election. As an unopposed incumbent, he was automatically re-elected without appearing on the ballot.

The Williams lawsuit  (2000)  cited above – about the textbooks – was a good case. The case about the Jefferson Fiasco was an emergency action when the editorial board’s darling Superintendent Deasy refused to to his job, probably  to bolster his standing in Vergara (he was the star witness for the plaintiffs)….complicated by MiSiS.  The resulting  injunction compelled Deasy to do his job – and Board of Ed to do theirs.  Say goodnight John.