CHARTER SCHOOLS TAP THE MUNI BOND MARKET: With enrollments rising, they find it easier to borrow to expand

The Children’s Aid Society sold municipal bonds on July 9 to raise money for its charter school, joining a record borrowing spree for such educational institutions across the U.S.

The New York charity will use the $40.7 million from the bond sale to build a six-story building to house its charter school in the South Bronx, says Chief Financial Officer Dan Lehman.

“The best and most reliable path out of poverty for children is educational achievement,” he says. 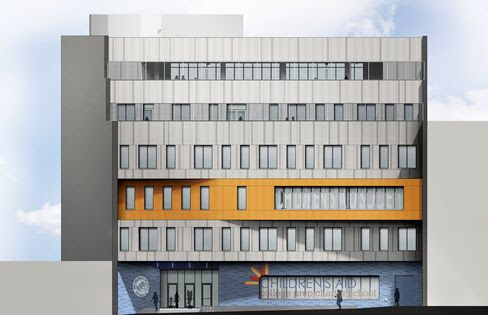 The school will also serve as a community center where students can take part in after-school programs. Source: FXFOWLE via Bloomberg>>

Charter schools have issued $1.2 billion of municipal bonds so far in 2015, according to data compiled by Bloomberg, and they are on pace to break last year’s record $1.9 billion.

Muni bond sales by charter schools have more than doubled over the past four years, setting records every year since 2012, according to a survey by Local Initiatives Support, a New York nonprofit that focuses on revitalizing neighborhoods. Federal rules allow nonprofits and private companies to sell tax exempt “public purpose” municipal bonds to raise money for projects that benefit the community. Charter schools, which are independently run and provide an alternative for parents of children in poorly performing districts, receive public funding based on how many students they serve.

“Schools 5 or 10 years ago couldn’t get to the market because they were too new,” says Wendy Berry, a financial adviser to charter schools and former Moody’s Investors Service analyst who wrote the Local Initiatives survey.

Even so, the debt is among the riskiest in the $3.6 trillion muni market because schools can close if enrollment drops or they lose their charter for poor performance. Of 818 charter school bond offerings since 1998, 41 issuers have defaulted, a rate of 5 percent, according to the survey. The average default rate for nonhousing muni bonds rated by Standard & Poor’s since 1986 is 0.03 percent.

To compensate for the risk, a 30-year charter school bond can yield as much as 5.6 percent, compared with 3.4 percent for AAA-rated muni bonds with the same maturity.

“You want to see steady enrollment trends, you want to see a decent waiting list,” says Courtney, who doesn’t plan to buy the Children’s Aid bonds. “Obviously, we’re also focused on the management and the board.”

Children’s Aid, founded in 1853, had never sold bonds before. Its school opened in 2012 and has about 280 students. Filling new classrooms should be easy: Enrollment in New York City charter schools has increased tenfold in the past decade, to more than 80,000 students, according to the New York City Charter School Center, an advocacy group. Almost 50,000 children are on waiting lists.

Unlike most charter schools that rely on revenue from enrollment to repay bondholders, Children’s Aid has promised to fund the debt regardless of how much money the school takes in. That led Standard & Poor’s to rate the bonds A+, based on the charity’s long record of successful operations and favorable fundraising trends.

The charity is paying 4.18 percent interest on the bonds. Similarly rated 30-year municipal debt yields about 3.4 percent, according to data compiled by Bloomberg.

Children’s Aid receives grants from more than 150 corporations and foundations and has more than 140 government contracts that brought in about $75 million of revenue in fiscal 2014, according to a presale presentation for the bonds. The contracts include administering health and fostercare programs.

The charity had about $300 million in cash and investments at the end of April. It will make bond payments 90 days before the due date and has promised to keep enough investments and cash on hand to pay off the bonds, which will mature from 2017 through 2045.

“This was something that we have proposed and put out there so that everyone would recognize, ‘Hey, we’re serious about this, and we’re going to make good on our money.’ ” Martin Z. Braun

The bottom line Charter schools are on track to sell more than last year’s record $1.9 billion in municipal bonds.