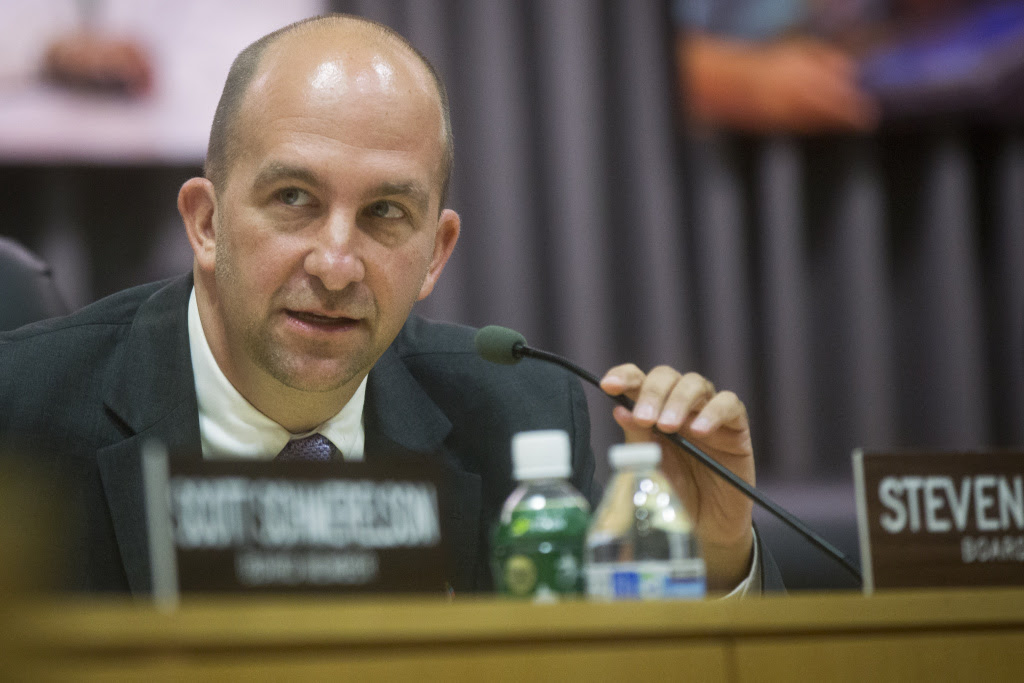 Audio from this story :

21July2015  ::  Steve Zimmer won the backing of his colleagues on July 1 to step in as Los Angeles Unified's new school board president and his plate is already piled high

Zimmer, who has held a seat on the school board since 2009 and served as a teacher and counselor at Marshall High School for 17 years, takes the helm of the seven-person board in the midst of ongoing troubles with the district's student data system, a burst of new state education funding, and questions about expansive, wasteful spending in the district's food services division.

Those are just a few of the items on a long to-do list for the school district, which is charged with educating over 540,00 students and is the country's second largest.

Education reporter Mary Plummer sat down to speak with Zimmer on Friday at KPCC's studios. The Q&A below has been edited for length and clarity.

What are your priorities for the school year ahead? What do you want the school board to tackle?

The most important task that the school board has in the coming school year is the search for the next superintendent of LAUSD. This search, both in process and outcome, is in many ways an assessment of the board and our ability to work together collaboratively, our ability to ensure that we have genuine public input into the process.

We are at a defining moment in public education. The definitional battles of the last five or six years about the role of public education, the role of democratically elected school boards, I think have largely been played out. I think that there is a collaborative sense of mission around public schools and particularly around our school district. We need to capture this moment. We can't transform outcomes fighting over different agendas. We can only transform outcomes by coming together and working collectively on behalf of kids. Our process has to really capture that.

And then there will be the deliberation over the group of finalists. All of whom I hope will be consensus builders, collaborators, and will have the proper balance of urgency and periphery to understand that to move forward it has to be all of us together. There's no shortlist.

I don't have hard and fast deadlines. What's really important to me is that we kind of listen to the soul of the process, that we're not thrust forward artificially but that we are exacting in our work, that we are professional and that we understand the urgency at hand.

We know roughly the first part of 2016 is when we need to be at a final stage. If we're able to arrive there sooner, we'll know it. If it feels that we need more time and we're truly listening while moving, we'll know it. I expect that the type of transparency we're hoping to have will lend a certain confidence to finding the right mix of velocity and care.

KPCC recently reported a teacher union executive's estimate that there could be up to 7,500 students who received incorrect transcripts recently.

That number has gone way down, I don't have a precise number. There were problems. There has been some trouble producing transcripts where students took courses at institutions other than LAUSD institutions. There have been some cases where certain tabulations were off. We're trying to understand how that happened and rectify that.

The problems weren't only due to MiSiS [the district's student data system]. In this instance, it really allowed us to do a deeper dive into oversight around transcripts and diplomas and critical end-of-school-career documents that I think is going to help us a lot moving forward.

That's not to say that any mistake is forgivable. These are kids' lives, and we're doing everything we can. We really put a team in place this summer to rectify the situation. I'm confident that by the time school starts this part of the situation will be resolved to the point that we will be sure it won't happen again next year.

This is not a full blown catastrophe or crisis. This is a fixable situation and I'm confident that we've got a team in place and that team together, I think, has really done some great work to resolve this over the summer.

Do I wish this never happened? Of course. We're trying to understand exactly what happened, how much of this was purely system error, how much might have been for whatever reason human error, and how much of it is kind of a hybrid of the two.

Superintendent [Ramon] Cortines has assembled the right team to understand what we need to learn to move forward and make sure this doesn't happen again.

How confident are you in MiSiS's ability to navigate the new school year. Do you think the issues we saw last year are resolved?

I don't use words like resolved. I use words like progress. I use phrases like we are really working on this and are attentive to it. I don't think it's going to perfect. I still think there are going to be struggles. There is no way we will see what happened last year.

What's your response to the food services division audit recently released by the district's inspector general that cited mismanagement, ethical violations and waste?

I'm not going to comment publicly on the food audit until I have the chance to meet with the entire board, other than to say it is something that is very serious and we're taking [it] very seriously.

What I will say in general is that our oversight and accountability actually affects the credibility of this district. Whether it is food services, construction management, instructional technology, our processes for procurement and our outcomes under that procurement are not at all separated from instructional outcomes.

It's an important thing to clear the fog around procurement processes and raise the level of stakeholder understanding of what these processes are. Only positive things will happen for kids when we do that.

What will your approach be as school board president? Do you have plans to run things differently?

I want to make sure that I continue [former school board president Richard] Vladovic's style of making sure that all voices are heard.

In terms of running things differently, I think that there's always a desire for kind of the nexus of greater efficiency, but also for the board to really perform the collaborative oversight role that we're charged with.

We are going to try and make committee work and the board meetings focused but also effective in terms of making sure that every minute that we spend is about children, about our schools and about the necessary roles that the board has to play to make sure that LAUSD is able to function.

That is a responsibility that's both awe-inspiring and awesome. I think each of us really has a sense of the weight of that and every indication that I've had so far is that there is a definitive collaborative spirit on this board and we understand that our work on the tasks at hand has to match the power of the dreams that every family in our school district has for their children.