THE BEST AND WORST PLACES TO GROW UP: How Your Area Compares 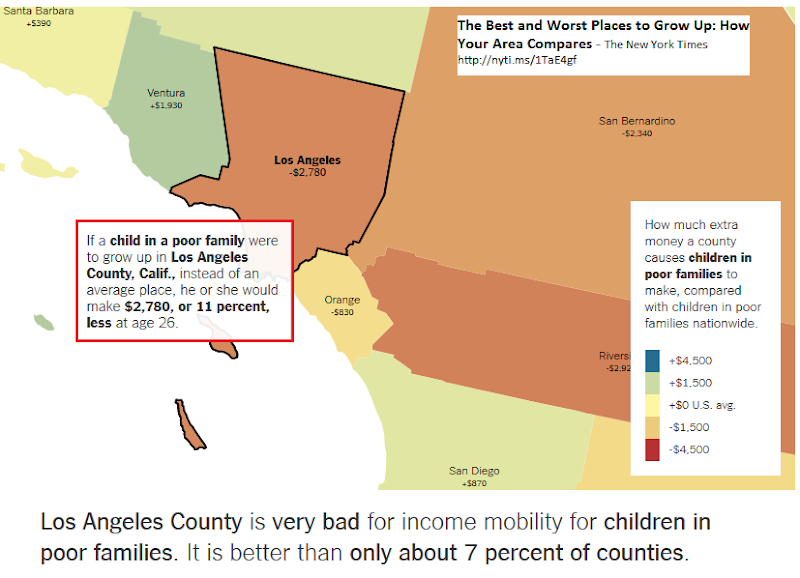 MAY 4, 2015  ::  Location matters – enormously. If you’re poor and live in the Los Angeles area, it’s better to be in Ventura County than in Los Angeles County or Riverside County. Not only that, the younger you are when you move to Ventura, the better you will do on average. Children who move at earlier ages are less likely to become single parents, more likely to go to college and more likely to earn more.

Every year a poor child spends in Ventura County adds about $100 to his or her annual household income at age 26, compared with a childhood spent in the average American county. Over the course of a full childhood, which is up to age 20 for the purposes of this analysis, the difference adds up to about $1,900, or 7 percent, more in average income as a young adult.

These findings, particularly those that show how much each additional year matters, are from a new study by Raj Chetty and Nathaniel Hendren that has huge consequences on how we think about poverty and mobility in the United States. The pair, economists at Harvard, have long been known for their work on income mobility, but the latest findings go further. Now, the researchers are no longer confined to talking about which counties merely correlate well with income mobility; new data suggests some places actually cause it.

Consider Los Angeles County, Calif., the focus of this article. (Feel free to change to another place by selecting a new county on the map or using the search boxes throughout this page.)

It’s among the worst counties in the U.S. in helping poor children up the income ladder. It ranks 181st out of 2,478 counties, better than only about 7 percent of counties. Compared with the rest of the country, it is also bad for rich boys and rich girls.

Here are the estimates for how much 20 years of childhood in Los Angeles County adds or takes away from a child’s income (compared with an average county), along with the national percentile ranking for each.

What a Childhood in Los Angeles County Does to Future Income

Across the country, the researchers found five factors associated with strong upward mobility: less segregation by income and race, lower levels of income inequality, better schools, lower rates of violent crime, and a larger share of two-parent households. In general, the effects of place are sharper for boys than for girls, and for lower-income children than for rich.

“The broader lesson of our analysis,” Mr. Chetty and Mr. Hendren write, “is that social mobility should be tackled at a local level.” Here’s where Los Angeles County stands among its neighbors.

In some places, the new estimates of mobility conflict with earlier estimates. For example, previous estimates suggested that New York City was a good place for lower-income children to grow up: Children raised in lower-income families in New York had above-average outcomes in adulthood.

But New York appeared above average in part because it has a large number of immigrants, who have good rates of upward mobility no matter where they live: Nothing about New York in particular caused these children to do better.

To remove variation that was simply caused by different types of people living in different areas, Mr. Chetty and Mr. Hendren based the latest estimates on the incomes of more than five million children who moved between areas when they were growing up in the 1980s and 1990s. These estimates are causal: They suggest moving a given child to a new area would in fact cause him or her to do better or worse.

In the new estimates, Manhattan ranks among the worst counties in the country for girls from lower-income families.

Here, better or worse is measured by the household incomes of children in early adulthood. This makes New York look worse than it would if individual incomes were used, because it, along with Northern California, has some of the lowest marriage rates in the country. Manhattan is actually better than most of the country at raising the individual incomes of poor girls. Marriage rates, too, are strongly affected by where children grow up.