Editorial: RECESS IS OVER, SCHOOL BOARD

By The LA Times Editorial Board | http://lat.ms/1CE8xPr 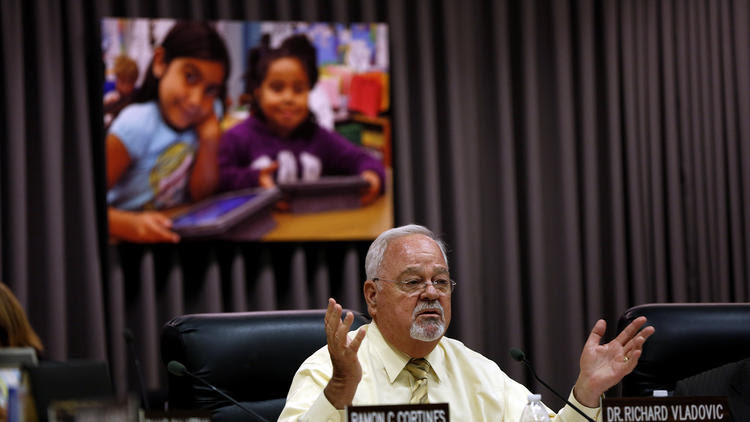 Dr. Richard Vladovic, then president of the LAUSD school board, talks with community members during a May session at Los Angeles Unified School District headquarters. (Los Angeles Times)

14July2015  ::  It's time once again for solidarity on the Los Angeles Unified school board, at least in the eyes of its members. This happens every two years, when newly elected members are seated. After bruising campaigns, they all metaphorically join hands and vow to work together in unity.

Meh. Board members don't need to pretend to agree or like one another. It's more important for them to speak their minds, smartly and to the point.

The board has so comfortably relied on Supt. Ramon C. Cortines, who stepped in after Supt. John Deasy left last fall, that it never even started the process of conducting a search. Cortines has indeed performed admirably, changing course on the disastrous iPad purchase and calling for an end to the unrealistic college prep requirement for a high school diploma. But the idea was never for Cortines to take over the job permanently. In fact, he recently indicated that he plans to leave in December. The pressure is on.

The board's excuse for inaction has been that it was waiting for the new members to take their seats and have a say in the selection. But it could have started the lengthy process six months ago by hiring a search firm, defining its priorities for the new chief executive and even winnowing the applicants to a group of semifinalists from which the new board could choose.

Though many people are calling for an open selection process, too much openness could work against successful recruitment. In a district this political, the unions and school accountability groups would demand very different things, slowing the search, and the new superintendent would be greeted by bad feelings from one side or another before the first day of work. Rather, the board should conduct a thorough search for a visionary yet pragmatic new leader and give the public regular, detailed updates on its progress without divulging candidates' names.

The board also needs to move swiftly, efficiently and transparently on other fronts. It has never identified its top goals for the next two to four years, which should include realistic strategies for improving academic achievement. It must figure out how to direct more state money to the most vulnerable students, improve middle schools and decide how it will grow its technology program.

And it's long past time for board meetings to become more businesslike, for the sake of the parents, teachers and students who want to participate but can't spend half the day cooling their heels. Members should stop wasting time with meaningless, symbolic resolutions and resist the urge to indulge in monologues that add little to the conversation.