THE SHOES CONTINUE TO DROP IN THE ¡VOTERIA! STORY –or– Whatever you call it, bribing voters is a bad idea + smf’s 2¢

It turns out that the “winner” wasn’t exactly the first winner!

By The Los Angeles Times Editorial Board |http://lat.ms/1OkQFdn 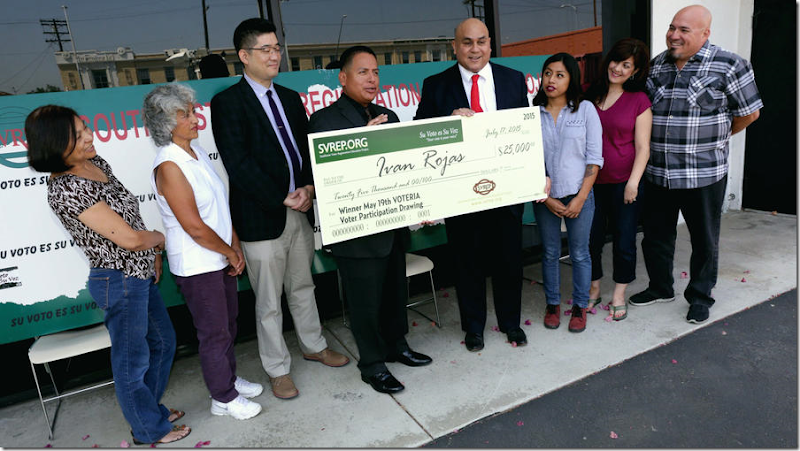 21July2015  ::  Perhaps the leaders of United Teachers Los Angeles will learn a lesson from the May election defeat of school board incumbent Bennett Kayser, whom they backed, by upstart Ref Rodriguez. Unfortunately, that lesson may well be that they must back up their next candidate for office by offering voters a cash prize to entice them to come to the polls.

That's the problem with the Voteria, a gimmicky lottery of sorts run by the Southwest Voter Registration Project. The organization, which works to boost voter turnout, especially among Latino voters, dangled a $25,000 prize to anyone who voted in the Kayser-Rodriguez election. Late last week it was announced that the prize went to Ivan Rojas, a 35-year-old security guard.

Rojas was the second person selected for the prize. It's noteworthy that the first threatened to call the FBI because she didn't believe the contest was legitimate. Eventually, she turned down the money when told that her name would be made public.

That's an understandable reaction. The civic act of voting for elected representatives doesn't readily mix with cash prizes and lotteries. It's true that too few people vote, especially in local elections, and more should be done to help potential voters understand what they stand to win or lose at election time. But bribing them is a bad idea; and as pure as the contest organizers' motives may have been, there is too much about the Voteria that is redolent of bribery.

After all, when every voter is automatically entered, every voter has a shot at winning, and a monetary value can be assigned to that chance. The Voteria organizers weren't promoting any particular candidate, but the Southwest Voters Registration Education Project does have a constituency — Latino voters. The organization is adept at communicating with those voters, some of whom, presumably, were on the fence about bothering to cast their ballots but did so after they heard of the contest. In this election, the Latino candidate defeated his non-Latino opponent. Voters who were aware of the prize were more likely to vote for Rodriguez by 2 to 1, according to the Center for the Study of Los Angeles at Loyola Marymount University.

Suppose that next time the organization offering cash payments to lucky voters is indeed pushing a particular candidate and does its outreach among voters likely to back that particular candidate. Suppose it's UTLA, for example. Or the police union, a real estate developer, a political party or anyone else. Or all of them at the same time.

Cash contests like the Voteria leave too much space for mischief and require careful examination and perhaps rule-making. That's something the Legislature should consider during the remainder of its term.

And the sanctimonious LA Times Editorial board doesn't feel there was ANY kind of mischief this time around??? Oh spare me if I really am getting tired of their ignorant, ill informed clown car of "opinions".