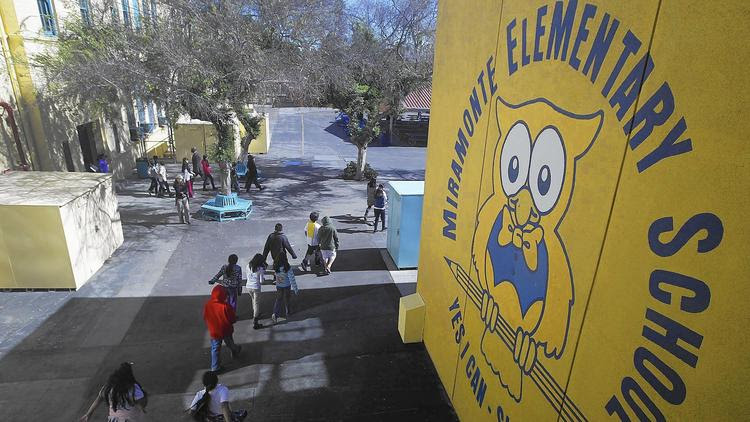 11July2015  ::  In the wake of the Miramonte child abuse scandal, the Los Angeles school district took unprecedented steps to better protect students: Hundreds of teachers were removed from classrooms, an investigative team took over probes from principals and officials lobbied for state laws to make it easier to fire instructors.

But the removal of a renowned educator from his classroom in April has raised questions about whether the new approach to teacher discipline has gone too far. It also overshadowed recent efforts to treat accused instructors more humanely.

Supporters of fifth-grade teacher Rafe Esquith say the investigation has been unreasonably secretive and more of a fishing expedition than a focused probe.

L.A. Unified School District officials, however, defend their efforts in this case and others, saying these investigations can take time and that Esquith's suspension from school was appropriate, regardless of the outcome. The officials said the inquiry began after Esquith made a reference to nudity in class.

School board president Steve Zimmer, a teachers union ally, said he couldn't comment on the ongoing Esquith case but did say that the district has worked to find the best approach to investigations and, along the way, had to err on the side of caution.

"I'm proud of the fact that we're doing a better job of protecting students, but I'm not proud that the rights of employees suffered in that pendulum swing," Zimmer said last week. "This is tough stuff and now we're attempting to rebalance post-Miramonte."

In January 2012, Miramonte third-grade teacher Mark Berndt was arrested on suspicion of lewd acts with dozens of children. He was sentenced to 25 years in prison. The district paid out record settlements — nearly $170 million — to alleged victims and their families.

Shortly after the arrest, then-Supt. John Deasy instituted changes in the handling of misconduct allegations. He removed the staff at Miramonte for the remainder of the school year and launched the comprehensive review of employee files. That survey uncovered a small number of employees who, like Berndt, had escaped close scrutiny despite warning signs or earlier allegations of abuse.

Meanwhile, teachers complained that the district had become overzealous, or worse. Some administrators, they said, were using any allegation to get rid of instructors they disliked. Minor infractions, they said, suddenly became grounds for dismissal and unproven allegations were enough to keep a teacher from ever returning to work.

"It's been an ongoing concern that often the people who have been caught up in these investigations are people who we think are being targeted for something other than what is stated, if anything is stated, such as union activity or teacher-performance issues," said Alex Caputo-Pearl, president of United Teachers Los Angeles.

Many teachers under a cloud were fired or pressured to retire. Of the 359 who were suspended after Berndt's arrest, many remained in limbo for months or longer — including some who were cleared of wrongdoing or disciplined for minor violations of district rules.

Employees who were removed from their schools typically reported to district administrative offices where they waited out the school day, which they referred to as teacher jail. Most continued to be paid.

"The most important thing is not the length of the investigation, but that we get it right," said Gregory L. McNair, a senior attorney with L.A. Unified.

The district wasn't prepared for the post-Miramonte deluge, officials said.

After Berndt's arrest, the number of employees pulled from classrooms soared; more than a third of the allegations involved sexual abuse or harassment.

L.A. Unified had long relied on principals to conduct internal inquiries, but officials concluded that these administrators frequently lacked the time and expertise.

As a result, the district last year assembled an 11-member Student Safety Investigation Team, at a cost of $1.8 million annually.

The team has opened 219 investigations, including Esquith's case, and completed 180, according to the district. Of those, 30 resulted in dismissal proceedings, 34 returned to work without discipline and five employees resigned; the unit didn't track the resolutions of many of the cases.

●●smf: Excuse my math, but of 180 completed investigations, 30 resulted in dismissal proceedings, 34 returned to work and 5 employees resigned?  That accounts for 69. What happened to the other 111?

The number of employees removed from classrooms — or "housed," as the district calls it — has dropped to 174.

Union leaders, however, said the district hasn't followed its own policies on disclosing information to accused teachers and closing cases quickly.

Under the teachers contract approved in April, the union and district will meet monthly for a status report on suspended employees. There also are firmer timelines for conducting investigations and providing information.

"We're encouraged there is the potential to move to a better system that protects student safety, but also honors due process and classroom stability," Caputo-Pearl said.

The district already had reconsidered some practices. A year ago, teachers were allowed to wait out their suspensions at home. And more teachers were permitted to continue teaching while an inquiry proceeded, provided that student safety was not an issue.

In Esquith's case, the district initially looked into a joke he had told about nudity — a reference to a passage in "The Adventures of Huckleberry Finn." Investigators then turned to his nonprofit foundation, which pays for an annual play, field trips and tutoring. Later, they learned about an abuse allegation from 40 years earlier, which became part of the inquiry.

Esquith has defended the joke as a literary reference that his students at Hobart Boulevard Elementary were knowledgeable enough to understand. Through his attorneys, he denied any wrongdoing related to other topics of the inquiry that have come to light.

Esquith attorney Ben Meiselas said his team is considering a class-action suit against L.A. Unified over the treatment of teachers because, "what's happened to Rafe is completely consistent with dozens of calls and emails we get from teachers every day — all with horror stories that are eerily similar."