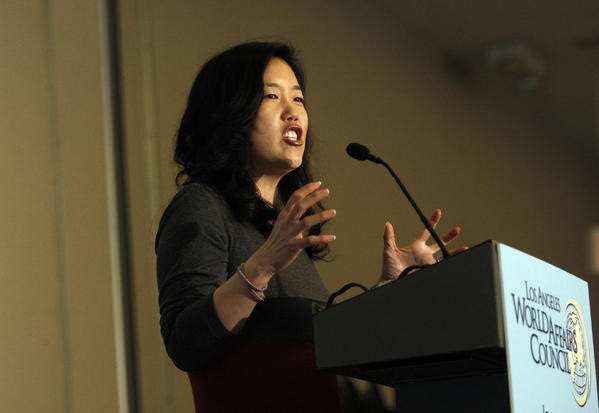 April 30, 2013, 3:00 a.m.  ::  A foundation associated with the Wal-Mart family fortune has expanded its support for the education advocacy group run by former District of Columbia schools chancellor Michelle Rhee.

The Walton Family Foundation announced Tuesday an $8-million grant over two years to StudentsFirst, which is headquartered in Sacramento but has operations in 18 states.

Rhee established StudentsFirst as a political counterweight to teachers unions and has pushed, mostly at the state level, for policies that include limiting teacher tenure, easing rules for dismissing teachers and making student test scores the major factor in an instructor's evaluation.

StudentsFirst has contributed $350,000 toward a campaign in support of L.A. school board candidates endorsed by Mayor Antonio Villaraigosa.

"Too many parents still do not have access to great educational options,” said Ed Kirby, deputy director of the foundation’s K-12 efforts, in a statement. “StudentsFirst is well positioned to help empower parents with the information and policies they need to choose from more high-quality schools of all types.”

The Walton funding is to support such activities as staff costs, lobbying and research. It's not for direct campaign donations, which are made from a separate arm of StudentsFirst.

Nationwide, StudentsFirst has overwhelmingly supported Republican candidates, because they best match its policy platform. In California, the group has expressed strong support for a new student funding formula proposed by Gov. Jerry Brown, a Democrat. The plan would allocate funds to schools and districts based on their numbers of low-income and minority students.

In other states, the group has lobbied for basing half of a teacher's evaluation on student standardized test scores.

The Walton foundation has provided $3 million to StudentsFirst since fall 2010. The funding level is increasing because the foundation wants to support the national growth of StudentsFirst, a spokesman said.

The foundation describes itself as "the largest private investor in education reform initiatives." Its grants have surpassed $1 billion in support of a parental choice philosophy that includes grants to charter schools and advocacy for vouchers that subsidize private school tuition for low-income families.