THE BASICS OF BETTER SCHOOLS: It's not about the school board, just consistent, careful, cooperative educational strategies + smf’s 2¢ 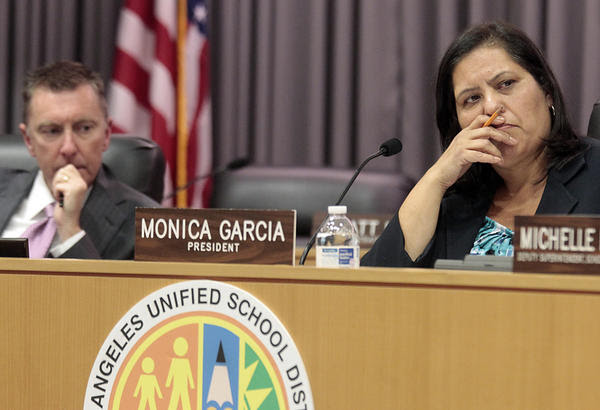 April 7, 2013  ::  The bile flowed freely in the first round of L.A.'s school board elections in March, fueled by unprecedented sums of campaign money. To what end?

Listening to the ads of the self-styled reformers, you'd have thought that charter schools were the elixir for every ill and teachers were slackers who needed a kick in the pants. For its part, the teachers union dismissed those who disagreed with it as corporate takeover artists.

The school board campaign, which isn't over yet, is a fight over power — how to hire and fire teachers, for example — not a debate over education. In these adult games, kids are the losers. The vituperation, and the lines drawn in the sand, conceals what's at the heart of the enterprise: an inspiring teacher, challenging curriculum and engaged students.

But here's the good news: There are tried-and-true strategies — familiar to any educator with a pulse, accessible to any parent who does some due diligence — that, when carefully and consistently executed, can change the arc of children's lives for the better.

Union City, N.J., where I spent a year in classrooms from preschool to high school, makes an unlikely poster child for the revival of public education. Its unemployment rate is 60% higher than the national average. Spanish is the home language for three-quarters of its students. It's estimated that a quarter are undocumented. Twenty-five years ago, Union City's schools were so wretched that state officials threatened to seize control of the district.

Now Union City's third-grade through high school achievement scores approximate the statewide average. What's more, in 2011, it boasted a high school graduation rate of 89.5% — roughly 10 percentage points higher than the national average. Last year, 75% of the graduates enrolled in college, with top students winning scholarships to the Ivies. And newcomers are doing remarkably well — two of the top 10 students in the class of 2013 came to the U.S. just four years ago.

Union City doesn't feature a celebrity superintendent or rock-star teachers. Most of the teachers and principals went to third-tier colleges and have never lived farther than an hour's drive away. There are no charter schools in town. The district isn't closing "failed" schools or firing teachers and principals whose students' test scores don't pass muster; this is leadership by enthusiasm, not intimidation. The approach is working: Polls show that more than three-quarters of the residents think their schools are doing a solid job.

Boiled down to its essentials, what Union City does is so obvious it verges on platitude.

It offers high-quality full-day preschool for every child, starting at age 3. Its word-soaked classrooms, which feature tons of reading and writing, give youngsters a rich feel for language. Immigrant kids get a solid grounding first in their native language and then in English. The curriculum is thought-provoking, consistent from school to school, and tied together from one grade to the next.

Close-grained analyses of students' test scores are used to individually diagnose and address their weaknesses. Teachers whose students aren't doing well in math and reading get hands-on help. They work collaboratively with their more successful colleagues, and coaches teach alongside them. The schools reach out to parents, enlisting them as partners in their children's education. The district sets high expectations but emphasizes a culture of caring, which generates trust.

It's a stable system — the superintendent has been on the job more than a decade — with barely a hint of political pyrotechnics.

The story is similar in school systems across the country where test scores are steadily improving and the "achievement gap" for poor and minority students is steadily shrinking. The odds-defying districts come in all sizes and shapes: big and small, well funded and meagerly supported, mainly Latino or black or heterogeneous, unionized and nonunionized, with elected and appointed school boards.

Consider what's been happening in Sanger, Calif., a Central Valley town decimated by the recession. There, the child poverty rate is three times the national average, three-quarters of the youngsters receive government-subsidized school meals and nearly a quarter of the students are immigrants who are still mastering English.

In 2003, Sanger was labeled a failing school system and put on a state watch list. Now it ranks among the top half of California districts in reading and math, much higher when compared with school systems with a similar profile. In 2011, 78% of Sanger's Latino students graduated, placing it among the top 10% of districts nationwide. As in the other high-performing districts, nothing flashy is happening, just a vigilant focus on student learning rather than adult power issues. Principals are trained to "lead the learning" rather than to manage the building; curriculum is coherent and uniform, teachers are coached and data drive initiatives, student by student.

Relations with the teachers union used to be so rocky in Sanger that would-be teachers were confronted by a union-sponsored billboard on the highway into town: "Welcome to the Home of 400 Unhappy Teachers." A new superintendent turned things around by ending the I-win-you-lose contest of wills. He brought the union leadership into the policy conversation, looking for common ground by focusing squarely on students' needs. When high school teachers and administrators were at loggerheads over how closely to follow a curriculum that, teachers complained, stifled students' creativity, the school chief stepped in to ensure that the teachers had more leeway.

Sanger and Union City are small in comparison with the Los Angeles Unified School District, and L.A.'s size is one of its greatest challenges. But a big nearby district — Long Beach, third largest in the state — shows the way. In 2003, it won the Broad Prize, a $500,000 award given to the urban district that excels nationwide in boosting achievement and reducing racial and ethnic achievement gaps, and year after year, student performance continues to improve. Stable leadership has kept Long Beach on a consistent reform path: maintaining high "no excuses" standards, strengthening the curriculum and making smart use of data. As one principal put it, "We've been moving in the same direction and the same passion for years."

Policy particulars vary with community culture and school budgets, but the parallels among successful schools are striking — strong, coherent leadership, openness to families, encouragement of teachers to improve their craft, a culture of trust.

The teachable moment for Los Angeles? Resolve the raging adult power battles and stay focused on what really matters.

David L. Kirp, professor of public policy at UC Berkeley, is the author of "Improbable Scholars: The Rebirth of a Great American School System and a Strategy for America's Schools."

smf: It’s hard not to agree with all of what Dr. Ker writes …until we get to that bit where winning The Broad Prize is an indicator of anything.