‘The Battle of Their Lives’ over LCFF: GOV. BROWN PROMISES FIGHT OVER EDUATION OVERHAUL

Jerry Brown says lawmakers will get 'the battle of their lives' if they balk at his plan to give more funds to poor districts and more spending flexibility to all school districts. 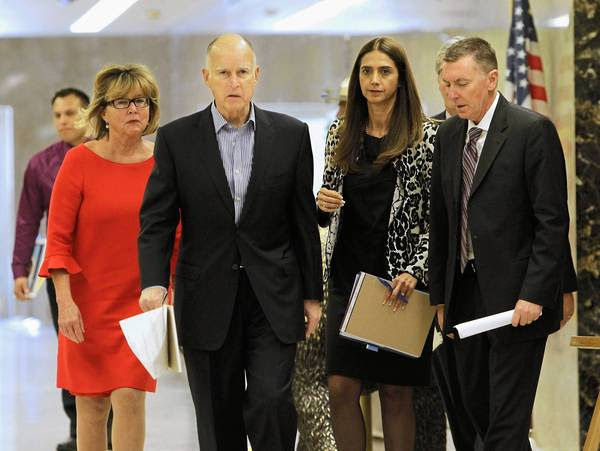 A day after Democratic state senators announced their differences with him over his proposal to change the way schools are funded, the governor came out swinging.

"This is not an ordinary legislative measure. This is a cause," a combative Brown said at a Capitol news conference, flanked by 20 school superintendents who support his program. "I will fight any effort to dilute this bill."

Brown wants to direct more money to districts that serve large numbers of poor students and non-native English speakers than to wealthier areas, while giving all of them more flexibility in how they spend state dollars. Senate Democrats want a less radical redistribution of money, more restrictions on how it is spent and a one-year delay in any funding change.

Brown vowed to do everything in his power to protect his plan. "If people are going to fight it, they're going to get the battle of their lives," he told reporters. "Everything we have to bear in this battle, we're bringing it."

The nascent dispute adds to differences that have already emerged between Brown and fellow Democrats in other key policy areas, including healthcare, water and environmental rules. And an Assembly committee on Wednesday rejected a Brown proposal to speed students toward graduation in hopes of lowering costs in California's two public university systems.

The proposal is part of the governor's larger blueprint for overhauling higher education, which a legislative analysis said "could lead to less rigorous courses … or grade inflation."

The rifts could grow as the legislative session rolls toward summer and negotiations begin in earnest on Brown's proposed budget, which contains his education plans. Democrats won supermajorities in both houses of the Legislature in last November's elections — enough to override a gubernatorial veto.

Brown set education as his top priority in January, saying: "Equal treatment for children in unequal situations is not justice." On Wednesday, he said his school funding proposal was a matter of civil rights and the key to reversing a growing gap between rich and poor in California.

"Increasingly this state is turning into a two-tier society," he said. "Those at the top are doing better and better and those in the middle and the bottom are doing worse and worse.

"The very least that we can do is invest in our schools in a way that recognizes reality," he said.

Los Angeles Unified School District Supt. John Deasy was among those joining Brown on Wednesday. He said the governor's plan could mean as much as $300 million more annually for the district than the Senate Democrats' proposal.

Senate leader Darrell Steinberg (D-Sacramento), who briefly discussed the education issue with Brown on Tuesday and plans a news conference Thursday to detail his counterproposal, said he supported the central goal of more funds to help poorer students. But he said his caucus had other ideas about how to ensure that the money would help the right students.

Brown and the lawmakers are haggling over how to use about $2 billion of the $49 billion that Brown proposes for K-12 education beginning in July. The governor said he was concerned the Senate's preference, which is to distribute the $2 billion to more districts around the state, would dilute its impact.

Brown also railed against lawmakers' preference for limiting the flexibility he wants to give school districts, saying there are groups with "very powerful lobbyists" who want to protect the status quo.

"The governor introduced this plan in January, but now he's beginning to engage," the Senate leader said. "And we're ready to engage."

During Wednesday's Assembly committee hearing, lawmakers, university officials and activists aired concerns about the governor's plan for higher education, which involves tying some new state funds to requirements that include higher graduation rates.

Assemblywoman Susan Bonilla (D-Concord) said Brown's ideas seem "like we're talking about a factory, with these projections and percentages and outcomes."

A representative of the Legislative Analyst's Office said the governor's plan should focus more on ensuring that students are receiving a quality education and are correctly trained for the workforce.

Brown fights back, responds to critics of his funding formula

April 24th, 2013 | Gov. Jerry Brown emphatically vowed Wednesday “to fight with everything I have and whatever we have to bring to bear” for passage this year of his school finance reform, as proposed.

Back from a trip to China and re-engaged on a priority issue, Brown spoke at a news conference a day after Senate Democrats announced they would propose a bill that would delay action on the governor’s Local Control Funding Formula (LCFF) for a year and would eliminate one of its chief features, providing a “concentration grant” for districts with high percentages English learners and low-income children.

“We will go for the full program and fight any effort to dilute” the proposal, Brown said. “Kids cannot wait; superintendents and thousands of people will work to see passage of our bill.”

Standing with Brown were 20 superintendents whom the governor had summoned to Sacramento to voice their support. Some then testified at a hearing on Brown’s proposal before the Assembly Education Committee.

Brown’s plan would invest an extra 35 percent in per student funding for every low-income student and English learner, with a concentration bonus in districts where high-needs students comprise a majority.

Brown said the concentration grant would put “a relatively small amount of money into high concentrations of poverty,” where it will have powerful effect.

Brown characterized LCFF as a civil rights issue that deals with “the fact of life that there are deep inequities from Oregon to the Mexican border.” In California, he said, 60 percent of children are poor and 23 percent speak a language other than English at home. “People who know best,” he said referring to the superintendents, “are confronting the challenges of a two-tier society.”

“I fully support the new formula. I deeply believe this brings equity long overdue to the state,” said Los Angeles Unified Superintendent John Deasy, who added that failing to take action this year would be “intolerable.”

Sacramento City Unified Superintendent Jonathan Raymond praised Brown for having the courage to “change the status quo and change it now.” He said it would be “criminal” and “intolerable” to delay passage.

Without naming names, Brown castigated consultants and groups in Sacramento he said are trying to thwart change from the current system, with its dozens of earmarked programs that have spending restrictions and regulations that the LCFF would eliminate. They “make money scaring people to keep categorical complexities to keep their employees and profits,” Brown said.

Brown did not say that he wouldn’t agree to changes to the LCFF, and his adviser, Karen Staph Walters,  who is also the executive director of the State Board of Education, promised “to sit down with colleagues in the Senate and work together” on the proposal.

Brown is expected to include amendments to the LCFF in the May budget revision; neither he nor his advisers would say what those might be.

Related Posts
Posted by smf at 9:11 AM