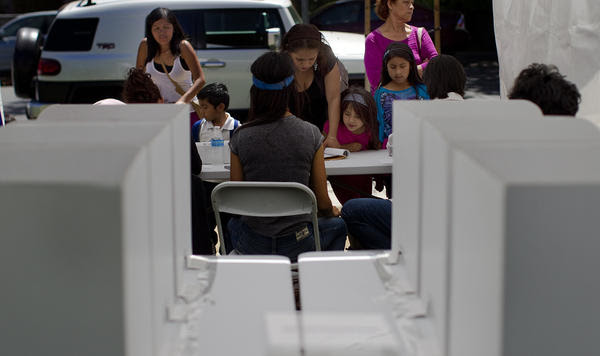 Among those eligible to cast ballots, 80% chose a proposal that combines the efforts of the school district with those of Crown Preparatory Academy, which already runs an unaffiliated middle school out of surplus space on the campus. The results were announced Wednesday morning.

The reconfigured program will have the district manage kindergarten through fourth grade and the charter run a program for students in grades five through eight.

“This is a very big day for parents,” said Amabilia Villeda, one of the parent organizers, speaking in Spanish to parents gathered Wednesday at a park near the school. “I want to thank everyone for your support in making this day a reality."

The 359 parents eligible to vote were those who signed a petition, under the state’s controversial parent-trigger law, to force aggressive change at the school. Their options include turning the school over entirely to an independently managed charter organization. Charter schools are exempt from some laws that govern traditional schools. Most are non-union, including Crown Prep.

In all, 190 parents cast votes and 179 were determined to be eligible based on who signed the original petition. Among these, 152 chose the partnership proposal. Fifteen voted for Crown Prep to run the campus on its own; nine voted for L.A. Unified to remain in control; three voted for Academia Moderna, another charter operator that submitted a bid.

The balloting took place from 7 a.m. to 7 p.m. Tuesday in polling stations set up under tents.

In this drive, L.A. Unified opted not to challenge the petition, but to submit its own reform plan and compete for the approval of parents. Under the plan, parents will participate in a hiring committee. Any teachers who wish to remain at the school will have to interview with this committee. Parents said they were impressed with the district’s ability to offer pre-school education and services to disabled students. They said they liked the charter because of its demonstrated ability to raise academic achievement.

“I’ve seen the struggle of some parents here that they’ve gone through so many problems with their children,” said parent Esmerelda Chacon. “I’m very, very happy with the results we got.” She added that her 8-year-old son is “going to like the changes for next year.”

The balloting was set up as a festive occasion, with activities that included face painting for children, piñatas and a raffle. A midday lunch of chicken, rice and tamales was provided for parents at the park. Later in the day, organizers supplied pizza and sodas.

smf: Let’s do some math. They taught it to us in school, it must be good for something!

I have a problem with that. It’s like saying that you didn’t vote in the primary (or the party you supported didn’t make the cut) so you can’t vote in the general election.

There is a name for this. It is “Antidemocratic”.

That’s less than one quarter of parents at 24th Street Elementary who “overwhelmingly chose” the plan “P-Rev” wanted them to choose.

And who exactly paid for the tents, face painting for children, piñatas and raffle; the midday lunch of chicken,rice and tamales; plus pizza and sodas?

When I vote in my elections in get a sticker.