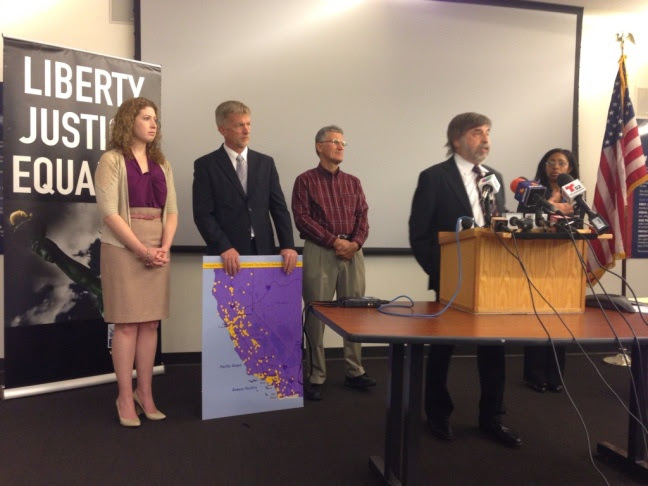 Adolfo Guzman-Lopez - Civil Rights lawyers at a press conference Wednesday announcing a lawsuit against California for allegedly failing to provide mandated help for students who aren't fluent in English.

The state’s large immigrant population makes English learner instruction a big issue in California. The state labels about one in four public school students as English learners. Many are immigrants; others are U.S. citizens raised by parents who speak a foreign language. State and federal laws require schools to help these students become fluent speakers, readers and writers of English so they'll do well in other academic subjects.

But Oxnard teacher and administrator Walt Dunlop, who attended the ACLU's press conference announcing Wednesday's lawsuit, said that’s not what he saw in the classroom. He said English learner students went days without help from teachers or peers.

“Over a lifetime as an educator, I’ve known English learner students who in despair have said to me about dropping out of school: ‘there’s nothing here for me Mr. Dunlop, nothing here for me.’ High school students crying during high stakes exams feeling that failure is imminent,” Dunlop said.

Mark Rosenbaum of the ACLU said his group sued the state for doing "nothing, nada" to identify these struggling students to keep them from falling through the cracks, even though civil rights lawyers put the state on notice of the problem earlier this year.

The state has a complaint process and Rosenbaum said that's about all it does.

State officials would not address the specifics of the lawsuit, saying they have yet to receive it, but generally denied the ACLU's allegations.

“The California Department of Education is determined to ensure that all English learner students receive appropriate instruction and services,” California Chief Deputy Superintendent of Public Instruction Richard Zeiger said in a written statement.

The statement went on to say that a recent court ruling confirms the state is meeting its legal obligation to English learners and will ensure that school districts are following the law.

According to data released this month, the high school graduation rate for English learners is 61.6 percent and has remained static over a two year period. The rate pales in comparison to the statewide graduation rate of 78.5 percent.

California's Department of Education has failed its obligation to give English-learning students legally required help, says a suit filed by the ACLU and others.

April 24, 2013, 10:20 p.m.  ::  The state Education Department has ignored its obligation to make sure that thousands of students learning English receive adequate and legally required assistance, according to a lawsuit filed Wednesday in Los Angeles County Superior Court.

State officials said they had not studied the lawsuit, but insisted they are meeting their legal obligations.

The suit, filed by the American Civil Liberties Union and others, focuses on an estimated 20,000 students who are receiving no help or inadequate services as they work to learn English and keep up academically at the same time.

"It is a blatant violation of the law not to provide these students the most basic and essential component of their education — language to access their classes," said Jessica Price, staff attorney with the ACLU Foundation of Southern California.

Advocates based their conclusions on information that school districts report to the state Department of Education. About 250 districts acknowledge they are providing no services or inappropriate language help to these students, and yet "the state of California does absolutely nothing in response," Price said.

The suit includes narratives, such as that of F.S., a student in the Compton Unified School District who was allegedly denied language help in third grade, failed most of his classes, and ultimately was retained. The next year, the same student, in the same school system, received help and "finally showed progress in his classes," according to advocates. Compton Unified is not a target of the litigation.

The suit was filed on behalf of six students and their guardians. They are remaining anonymous out of concern over possible retaliation from their local school systems, attorneys said. Also suing is Walt Dunlop, a former Oxnard Union High School District teacher who has worked with English learners and criticized his district's programs for them.

Although federal and state funds are set aside to help English learners, the best approach has long been a topic of contention. Programs that offer the teaching of academic subjects in a foreign language have become more rare. It's more common for English-speaking teachers to receive training in how to make their lessons more accessible. And students can also receive support in classes taught in English.

The ACLU's Mark Rosenbaum said it was outrageous that so many students received no help at all.

A state official insisted California was not shirking its obligations. The education department is "determined to ensure that all English-learner students receive appropriate instruction and services," said Chief Deputy Supt. of Public Instruction Richard Zeiger.

"When questions arose," he added, the department "asked local educational agencies to provide additional information regarding the services they are required to provide."

Zeiger also urged parents with specific issues to contact the department though its established complaint process.

In an earlier round of litigation, advocates targeted Dinuba Unified as well as the state. Dinuba settled the suit, setting the stage for the current legal action targeting the state.

Also participating in the suit are the Asian Pacific American Legal Center and the law firm of Latham & Watkins.

Mark Rosenbaum, chief counsel for the ACLU of Southern California, left, with attorney Jessica Price, center, and Walt Dunlop a teacher at Oxnard Union High School District talk during a news conference in Los Angeles, Wednesday, April 24, 2013. About 20,000 students in California who need to learn English aren't getting adequate language instruction, according to the lawsuit filed against the state and education workers on Wednesday by the American Civil Liberties Union. (AP Photo/Nick Ut)

4/24/2013 06:50:03 PM PDT  ::  LOS ANGELES - About 20,000 students in California who need to learn English aren't getting adequate language instruction, according to a lawsuit against the state and education workers filed Wednesday by the American Civil Liberties Union.

Under state and federal law, schools are required to teach non-English speakers the language, but by its own records, the state isn't offering English instruction to nearly 20,000 students. The suit alleges that lack of instruction has meant some children had to be held back a grade or live with low proficiency scores because of a language barrier.

The ACLU brought the issue to the attention of the state with a letter in January, and officials say they're working to ensure compliance at the local level.

"These kids are not getting the differentiated learning they're supposed to be getting," Rosenbaum said.

Chief Deputy Superintendent of Public Instruction Richard Zeiger said in a statement that the state is determined to provide English learners appropriate instruction and encouraged parents to bring problems to the state's attention.

"The Department will continue to work with local agencies to ensure compliance with districts' obligations to provide services to English learners," Zeiger said.

Zeiger also noted that a recent appellate court decision found that the department was meeting its legal obligations related to on-site monitoring of English learners.

In each case, schools identified the students as English learners but were later taken out of English language classes and saw their grades drop dramatically in courses where they struggled to understand instruction, the suit alleged.

One mother had both of her children, an 8-year-old and a 10-year-old, held back a year immediately after they stopped being provided language instruction, the suit alleged.

Rosenbaum said parents often didn't know their children had been taken out of language classes, and in one case, a mother was told to bring her own translator to school meetings to get an explanation.

In response to the January letter, school officials acknowledged the problem while adding more than 98 percent of the state's 1.4 million English learners are receiving services.

The suit seeks a court order for schools to provide courses to English learners who need them, attorney's fees for filing the suit and unspecified further equitable relief the court finds appropriate.