Here’s the $64,000 question: If the federal government throws $4.5 billion at struggling schools for three years and then stops the flow of cash, does it make a difference? A long-term difference? Do test scores rise? Do teachers stay? Do kids show up to school more?

Those who argue for more funding for schools say the federal philosophy is perhaps more like giving a starving man a feast and then kicking him out the door, saying, “Now you know how to eat! Off you go!”

With the money running out this fall, all eyes will be on the 1,300 schools nationwide that got School Improvement Grants. In San Francisco, nine schools that were ranked among the worst in the state and country got nearly $5 million each over the last three years to turn the proverbial ship around.

Where did the money go exactly …and has it made a difference so far: 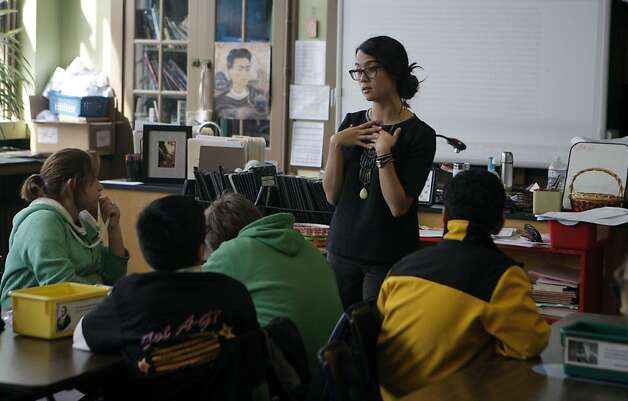 Sunday, March 17, 2013   ::  It was a run-down school with low test scores and teachers who didn't come back after summer break. Technology was sparse, as were books, and too few parents wanted to send their kids there.

But with the lowest-of-the-low label came money. Lots of money.

In 2010, the Mission District school received a federal School Improvement Grant of $4.5 million to spend over three years. It was one of nine schools in San Francisco, 92 schools in the state and 1,300 nationwide to get one of the grants.

This year, the money runs out and education experts, academics and policymakers will all ask the same question: Did it work?

The Obama administration wagered that pouring billions into struggling schools over three years would pay off in higher test scores and students who would excel for years to come.

The federal funding - an average of $1,400 more per student - required schools to adopt one of four strategies: replace most of the staff; replace the principal and revamp teaching methods; convert to a charter school; or close.

Beyond that, schools had a lot of leeway in spending the money.

"Throwing a million dollars at a school does have some merit as long as it's planned for and spent wisely," said Diana Rentner, deputy director of the Center on Education Policy in Washington, D.C. "You just don't know how all of this plays out."

It will be months or years before a final answer comes in, but experts say that early evidence shows the money has made a difference at many schools and that some of the improvements should last - at least for a while.

In San Francisco, where some schools got more than $4,000 per student, the money bought summer school classes, computers, books, social workers, nurses, literacy and math coaches, and more.

All told, 70 people were hired with the grant funding this year at nine city schools.

And there were important little things like paper and pencils.

Two years ago, teacher Monica Giudici took a job at Everett Middle School, one of 33 teachers hired in the overhaul of the staff that was required by the federal grant.

Since she stepped into her classroom, she hasn't paid for even a pencil out of pocket.

It is a teacher's dream to have everything he or she needs for reading, writing and arithmetic.

Like other Everett teachers, she got a laptop computer as well as the computerized equivalent of a blackboard. She got more than 500 books. She has access to a computer lab and sturdy new chairs in a gleaming, well-stocked library.

One of the biggest benefits of the grants, said Everett Principal Richard Curci, was the ability to pick and choose the teachers at his school, putting every candidate through a rigorous process that included teaching a class and answering questions posed by parents and students.

"I've got some of the best and brightest staff I've ever worked with in four decades," Curci said. "If you're a teacher here, you're not mediocre, you're exemplary."

The teachers put in several training days each year outside school. They have on-site coaches to help them when they struggle with a topic, and can rely on special teachers who pull struggling students out of class when they need extra assistance.

All of it has paid off, Curci said.

African American and Latino students have posted double-digit gains on state standardized tests. Suspensions are down; attendance is up. Prospective parents are touring the school with smiles, Curci said.

"The school has changed dramatically," said Giudici, who was a student teacher at the school prior to the grant funding. "There are so many adults."

"Kids are happy," her principal added. "They know the adults here care about them, are concerned about their education."

By this fall, though, the money will be gone.

District officials said they will continue to pay for a handful of coaches, social workers and others at the nine schools to offer continuity.

But at least half of the newly funded staff will have to go - as will most summer school programs and the stash of cash for new microscopes, markers, construction paper, pencils and calculators.

Administrators say not all will be lost. If and when they have more money, they say, they will know exactly where and how to spend it - what types of positions or programs will be most effective in helping students.

Teacher training will endure, new discipline policies will remain and the commitment of the staff will not disappear, said Kevin Rocap, the district's executive director of the grants.

But for how long?

"The idea behind this," said Eric Hanushek, a senior fellow at Stanford University's Hoover Institution, a conservative think tank, "is that you essentially bribe and/or pay for initial transformation of schools, and if they get on a better path, then the schools should be able to do it themselves."