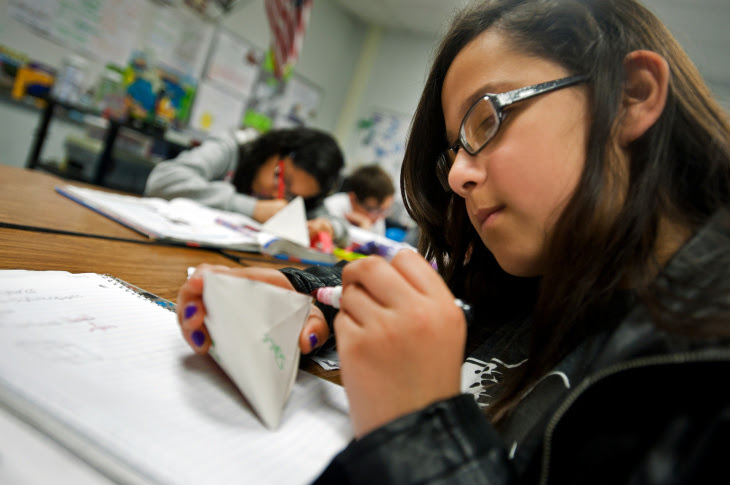 April 17th, 2013, 1:00pm  ::  Recently we reported on two schools in the Baldwin Park school district that have unique programs: a high school that helps teenage parents stay in school, and an elementary school where teaching a dual language immersion program is yielding top results. Now the school district has earned the number one ranking in the state for closing the achievement gap.

The Baldwin Park school district (BPUSD) is nestled in the San Gabriel Valley. 86% it’s students are Latino and 85% are low-income.  It's a population that traditionally underperforms in comparison to school districts in middle and upper income neighborhoods. BPUSD is breaking that mould.

“This year, the highest overall grade of a B is earned by Baldwin Park Unified (Los Angeles County). In Baldwin Park, low-income students posted five-year gains of 102 API points, far exceeding the average gains of 64 points in other large unified districts across the state. In addition, San Marcos Unified (San Diego County), West Covina Unified (Los Angeles County), and Lake Elsinore Unified (Riverside County) also rank at the top of our rankings. These districts all serve student populations that are over 40 percent low-income, and over 50 percent African-American and/or Latino”

The Ed-Trust West report cards use data from the California Department of Education to evaluate performance, academic improvement over five years, the size of achievement gaps, and college readiness. A-F grades on these four indicators are combined into a single overall grade.

“We hope that parents, educators, and community members will use these report cards as a resource to identify districts that are closing achievement gaps and providing greater opportunities for all students to be successful,” said Jeannette LaFors, Director of Equity Initiatives at The Education Trust–West, on the organization’s website.