from Schools on Point: News from LACOE | http://bit.ly/XtwhkU 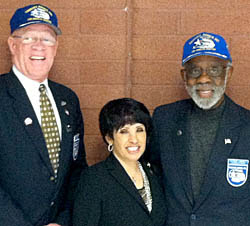 4 April 2013  ::  A talk by a U.S. military hero who fought fascism abroad and racism at home was the highlight of recent Black History Month activities at Nidorf Juvenile Hall in Sylmar.

Theodore Lumpkin served during World War II as one of the first African-American military pilots, known as the Tuskegee Airmen. His first-hand account of American history engaged and inspired students.

Lumpkin said his dream was to fly and defend his country, even though some people disagreed. "My dream never died -- always believe in your dreams," he told a group of 25 teens detained at Nidorf.

Past President of the Los Angeles Chapter of Tuskegee Airmen, Lumpkin (on right in photo) was joined by fellow Board of Directors members Lowell Steward, Jr. (son of Tuskegee Airman Major Lowell Steward) and Sallie Pratt. They each spoke and fielded a lively hour-long question-and-answer session with students and staff.

The event was made possible through an ongoing collaboration at Nidorf between LACOE and the Probation Department to better engage students in learning through guest speakers and other special activities, including art and essay contests.

smf: There is often a bureaucratic disconnect between LAUSD and LACOE – the two ten-ton-gorilla  education bureaucracies of LA County.

It often seems like LACOE supports every other school district and only oversees LAUSD. LAUSD goes it alone; hoping that LACOE will qualifiedly approve our budget annually and otherwise leave us alone ‘till next year.

This may be perceptual …but it is also intentional.  And both sides seem to like it that way.

That said, LACOE’s court and camp schools serve mainly/mostly/many LAUSD students – in terms of pure numbers we are the primary feeder of that program.

The “pure numbers” are not data points – they are young people  …and a lot of good people are doing the best they can with what little they’ve got to disrupt the school-to-prison pipeline.

Presently, provided that you truly need to feel like a law click here oriented scrutinization grader, rehash the activity portions of times at 10:00pm.