Leaders of a parent group have endorsed a plan to improve 24th Street Elementary, which would be jointly run by L.A. Unified and Crown Prep charter school. 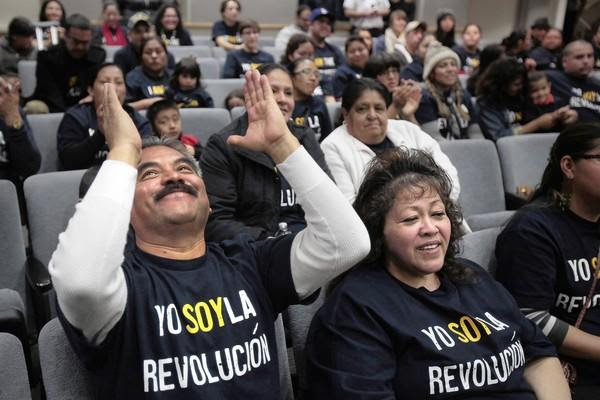 Eliazar Jacobo, 58, was among more than 100 parents and concerned citizens who showed up at Los Angeles Unified headquarters in January to deliver signatures in hopes of invoking the parent-trigger law for low-performing 24th Street Elementary. (Rick Loomis / Los Angeles Times / January 17, 2013)

April 3, 2013, 8:10 p.m.  ::  Rather than do battle over a controversial parent-empowerment law, Los Angeles school officials earlier this year opted for collaboration. This week, that move started to pay dividends.

A plan devised by the L.A. Unified School District and a charter school to improve 24th Street Elementary — a persistently low-performing school south of downtown — has been endorsed by leaders of a parents group.

Under California's so-called parent-trigger law, parents could evict L.A. Unified from its own campus. Instead, the favored proposal calls for the district to run the program for kindergarten through fourth grade. Crown Preparatory Academy would manage grades five through eight.

"The process is not over," L.A. schools Supt. John Deasy said. "But to date, what has come out of it is unique and groundbreaking. It has been a remarkably positive process."

The chain of events began in January when a majority of 24th Street parents submitted a petition under the 2010 trigger law, which allows them to decide how their troubled campus should be run. They have the authority to replace the entire staff, for example, or transfer the school to an outside operator.

Past trigger actions in Compton and the high desert city of Adelanto sparked long legal battles and bitter conflict among parents and faculty. Teachers union leaders are among those who have criticized the process as cumbersome and divisive.

But rather than fight the petition, Deasy and the Los Angeles Board of Education chose to look for what they considered a workable solution.

Next week, parents who signed the trigger will chose from among four proposals for the campus: the jointly run effort; one under which the district would retain sole authority; one that turns the entire campus over to Crown Prep; and one submitted by Academia Moderna, another charter school.

Charters are independently managed and exempt from some rules that govern traditional schools; most, including Crown Prep, are non-union.

"The parents were very impressed with all the proposals they received and reviewed," said David Phelps, a spokesman for Parent Revolution, a group that lobbies for parent-trigger laws nationwide.

He said the review period was extended to "allow LAUSD and Crown Prep to work out a partnership arrangement at the specific request of the parents," who thought both parties "offered significant transformational ideas."

Under the joint proposal, students would move from the district program into the charter starting in fifth grade. The two programs would collaborate on teacher training and establishing a unified campus culture.

Now in its third year, Crown Prep operates out of what had been underused classroom space on the 24th Street campus. About 30% of its 287 students started off at 24th Street, said Laura McGowan-Robinson, the school's founder and executive director.

"This is something that we're excited to be a part of," she said. "It could be a national model. People often talk about how charters should share their best practices and, unfortunately, very little of that is happening."

In an interview, Deasy confirmed that parents at a second district school — Weigand Avenue Elementary in Watts — submitted a trigger petition this week. The district is currently verifying the signatures.