Free dental, physical and mental care is now within walking distance for many residents in South Los Angeles.

"The physical and mental services would be the most used," said Jacqueline Zendejas, a senior at Washington Prep High School. "Students, whether they like it or not have to get things off their chest and sometimes they wouldn't consider their friends the best option because they don't know if one day they won't be there anymore or they'll go tell other people.

Zendejas is pursuing a career in the medical field and says that this clinic is inspiring.

Mark Ridley-Thomas, Los Angeles County Supervisor for the Second District, was on hand for the opening. He said it will improve health care access for South LA residents.

Community member, Kenneth Jones came out to lend his support of the completed project.

"It shouldn't be anybody suffering at home because they have lack of medical attention or transportation," Jones said. "For many years, post-traumatic stress disorder has been overlooked and it's only been applied to U.S. veterans, but in actuality the children who grew up in gang infested community are under post-traumatic stress."

This center not only focuses on physical health, but has an emphasis on people's mental state as well. It will be a place for these children and the community at large to get the help they need.

"We never had a clinic where they can go and be able to express themselves because a lot of people cannot relate to gang violence," Jones said. "Even if they never participated, btu I grew up and live on the street with 14 boys and then one day when you get 45 you look up again and there's only two people still left standing."

This string of 12 clinics is only the beginning. In January 2014, ObamaCare will create many more opportunities like this in underserved communities. St. John's Well Child & Family Center opened another wellness clinic on March 27 at Dominguez High School in Compton. 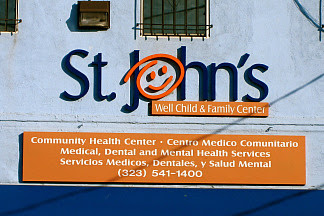 April 4th, 2013, 11:00am  ::  St. John’s Well Child and Family Center has locations throughout South Los Angeles. That includes five school-based wellness centers, including the one it just opened on Thursday at Washington Preparatory High School in Westmont.

Representatives from St. John's Well Child and Family Center and the Los Angeles Unified School District (LAUSD) cut the ribbon on Washington Preparatory High School Wellness Center, which will provide free or low-cost medical, dental and mental health services to its students as well as residents of the surrounding community.

It's only been eight days since St. John's officially opened its last school-based wellness center – last Wednesday was the grand opening of Dominguez High School Health Center in Compton.

"It's really about ensuring easy access, quality care and making sure students are well so they can appropriately function in the classroom," she said at last week's event.

The clinic, which is one of five school-based centers operated by St. John's, will also offer other support services, including health education and assistance with getting enrolled in a health insurance plan. It will be open twice a week – Tuesday and Thursday from 8:30 a.m. to 5 p.m. – with plans to eventually expand its schedule.

South L.A.'s health problems are exacerbated by a widespread lack of access to care. The entire region of South Los Angeles has an adult obesity rate of about 1 in 3. In 2007, when county health officials looked at Westmont, where Washington Prep is located, they found a rate even higher than that – more than 35 percent of adults were obese. The same was true for about 23 percent of children.

Another recent county report found that about 12 percent of adults in South L.A. are diabetic.

smf: You wouldn’t know it from the press coverage, but this facility was built with LAUSD School Bond Funds and the operation of the Wellness Center is a partnership with LAUSD and St. John’s and The LA Trust for Children’s Health …as well as LA County Health and other community partners.  In my capacity as a Bond Oversight Committee member and a board member of the LA Trust I was asked to make a few remarks – an invitation I happily abused accepted:

I have been making this speech – at groundbreakings and ribbon cuttings – for a decade.

Once upon a time - that’s how stories like this begin, stories of other times and other places, where scary things happened – or maybe didn’t. This story is true, it did happen – and it happened because of students then in LAUSD, now in LAUSD and students who will be in LAUSD next semester, in the next decade - and for the children of students yet unborn.

Long ago and not-so-so-far-away - children – kindergarteners sometimes – got on the bus in the dark and returned home in the dark - away from their neighborhoods across town to other schools because their schools were too crowded. Some Children attended year-round schools that took days out of the school calendar and their educational opportunity. The School District put “temporary” bungalows on playgrounds and playing fields in on the lawn and on the parking lot. Temporary sometimes lasted forever.

The problem was too many kids and not enough schools. And a serious lack of political will. The quick fix was to move the kids around, move the calendar around, move the deck chairs around And all the while cutting corners and compromising education. Compromising the lives and future of children.

Adults, as usual in this kind of story, goofed up the lives of kids. (I used another word for “goofed up” when I wrote this – but there are adults who might get upset by my real word.)

We passed School bonds – starting in 1997 with Prop BB and going through the alphabet in strange order from K and R and Y and backwards to Q. We taxed ourselves and began to build new schools and really began to fix up the old ones.

We put up tents and unimportant people made unimportant speeches. We broke ground and important men and women – builders and architects and construction workers built schools.

In time we built 130 new schools across Greater Los Angeles –and we repaired, upgraded and modernized every existing school in the District We made Los Angeles Greater – and closer to the promise of the City of Angels we aspire to be.

Now kids don’t have to get up early in the morning and ride the bus for an hour or so to another school in another neighborhood – and then get back on the bus and back on the freeway to get home again at night.

Now young people can go to school in their own neighborhood.

Now all kids can go to school on the same schedule, starting in the fall and ending in the late spring – with summer for vacation or remediation or enrichment.

And we have begun to take some of the bungalows and trailers away and get some of the playground space back.

Ladies and gentlemen, boys and girls – We the People have won. We have won a famous victory for the children.

And as part of that victory we also have Unanticipated Benefits.

Now – as a result of this building program - we have full day kindergarten for beginning learners in every elementary school in the District.

And Now, as a result of the building program and important partnerships in the community – we are opening and operating Wellness Centers throughout the District. The LA City Schools and PTA in LA formed a partnership early in the last century to operate student health clinics – we invented School Based Health Clinics here in L.A.

Now, in the 21st Century we are fostering new partnerships between schools and their communities and healthcare providers to build, open and operate Community Wellness Centers – serving the medical needs, oral health needs and mental health needs of students, families and the community.

And you have additional partners here at the Wellness Center at Washington Prep High School:  The voters and the taxpayers of the greater community.

Here we bring together the mission of Education, Student and Public health. Here we keep the children well, the family well and the community well. That is what we are celebrating today.

In Africa the Masai people greet each other in Swahili “Kasserian Ingera”: “And how are the children?” And the correct response is “All the children are well.” ALL the children. Because the health and safety and well being of children are the most important thing; second to nothing. It’s not an outcome – we insist on it now. Students who are not healthy cannot learn. – whether the issue is disease or nutrition or oral or emotional health. A school where the kids or the staff does not feel safe cannot function. A community whose wellbeing is in question – is in trouble. The school is the center of its community; this wellness center is the core of both.

Education, Prevention, Diagnosis, Treatment. Wellness in a one stop shop. I’ve made this speech for a decade, but never before have I been so delighted with the thing we have built – because we have built more than we started out to build. We are building a healthy, healthful, well prepared and well educated future.

It doesn’t get any better than this. But ladies and gentlemen, boys and girls: It will! Because, as Boardmember LaMotte said earlier: “There is always room for growth!”