‘PAY FOR PERFORMANCE’ PITFALLS: A cheating scandal in Atlanta reveals the dark side of offering incentives.

Op-Ed in the LA Times by Lynn Stout | http://lat.ms/ZPlzGJ 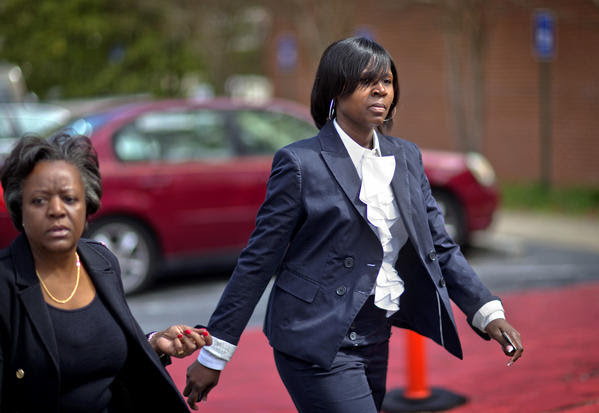 The Atlanta cheating scandal illustrates the dangers of the modern infatuation with incentives and what's called "pay for performance." Above: Atlanta Public Schools defendant Sandra Ward, right, turns herself in at the Fulton County Jail accompanied by her attorney Robbin Shipp, left, on April 2 in Atlanta. (David Goldman / Associated Press / April 2, 2013)

April 12, 2013  ::  Last week, 35 public school teachers and administrators indicted for allegedly cheating to raise test scores in an Atlanta school district began turning themselves in to authorities. They may be the tip of the iceberg; a state investigation implicates 178 educators in the scandal.

Were these teachers and principals all "bad apples," intrinsically unethical individuals who somehow ended up in the same school district? Not likely. They were ordinary people who allegedly did unethical and dishonest things to achieve the student performance targets needed to keep their jobs and earn their bonuses. The Atlanta cheating scandal illustrates the dangers of the modern infatuation with incentives and what's called "pay for performance."

Lawmakers often view incentives as the answer to almost every policy problem. Stock returns lagging? Change the tax code — as Congress did in 1993 — to require executive pay to be linked to "objective metrics." Medicare costs spiraling upward? Launch a pilot program — as the Department of Health and Human Services has — basing physician payments on measured outcomes. Children failing to learn their ABCs? Tie teacher pay — as Atlanta's school district did — to student test scores.

What happened in Atlanta is only the latest instance in which performance incentives tempted employees into opportunistic, even illegal behavior. During the 2008 credit crisis, performance-based pay lured mortgage brokers into approving unqualified borrowers and financial executives into making risky derivatives bets. Incentive pay played a leading role in the Enron and WorldCom frauds. It was implicated in the 1980s savings and loan crisis.

These cases show the underbelly of pay for performance. Explicit incentives work for simple tasks where an employee controls the outcome and where product quality is easily assessed — for example, offering employees of a moving company $20 for every sofa they move in an hour without damage. It's pretty clear whether the sofas got moved, and whether they got damaged.

But what about complex, hard-to-monitor tasks where the desired outcome is difficult to measure and subject to influences outside the employee's control — such as educating a child or restoring a patient to health? It is almost impossible to design objective performance metrics that can't be met through illegal or undesirable behavior. In the case of education, it could be falsifying student test scores; in the case of healthcare, it could be controlling blood pressure through medications that make patients feel sick instead of persuading patients to exercise. And when you create a system that inadvertently incentivizes illegal or undesirable behavior, you get more of it.

Policymakers and reformers assume the solution is "getting the incentives right." They believe incentives might help and can't possibly hurt. But as the Atlanta scandal shows, and as social science has proved, incentives can hurt. Pay for performance can create workplaces that suppress ethics and conscience. Instead of more productive employees, you get more opportunistic, unethical and criminal employees. Incentive plans are like dynamite — useful but also dangerous. These plans should be handled only by experts, with great care and in small amounts.

What is the alternative to pay for performance? It's worth remembering that before free-market ideology and the dogma of incentives took root, employers often compensated employees — including teachers, doctors and business executives — with flat salaries and modest bonuses adjusted annually according to the employer's opinion of whether the employee had done well. The system relied on subjective, after-the-fact rewards more than objective, predetermined incentives. That required a fair amount of trust and a sense of mutual obligation. Employers had to trust employees to work to earn their predetermined salaries rather than loafing. (Bad employees can be fired, but this solution costs the employer too.) Employees had to trust that if they stuck around and did a great job, their employers would recognize and reward them.

This doesn't mean pay for performance is always bad. When the task is simple and it's easy to spot employee misconduct — remember those sofa movers — incentive plans can get better results than a flat salary. Crude incentive plans that look only at a few simple performance measures and that are driven by the demands of elected politicians are especially dangerous.

We should let employers and supervisors on the front lines of the workplace — not politicians, bureaucrats or would-be reformers — decide how best to motivate employees. They might decide they need more trust, and fewer incentives.