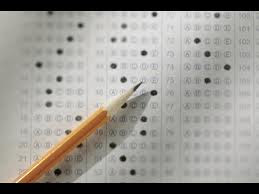 April 20, 2013 at 10:53 am  ::  Talk about corporate-based school reform. New high-stakes standardized tests aligned with the Common Core State Standards are featuring plugs for commercial products. And the companies didn’t have to pay a penny.

Yes, New York state students who this past week took Pearson-designed exams were just treated to plugs for LEGO, Mug Root Beer and more products from at least half a dozen companies, according to  the New York Post. (follows)

One teacher who administered the test  was quoted as saying:

I’ve been giving this test for eight years and have never seen the test drop trademarked names in passages — let alone note the trademark at the bottom of the page.

Students said the product plugs sometimes had nothing to do with the question, the Post said. Marco Salas, an eighth-grader at the Forest Hills middle school, was quoted as saying:

For the root beer, they show you a waitress cleaning a table and the root beer fell on the floor and she forgets to clean it up. Underneath, they gave you the definition that it is a soda and then the trademark.

The new Common Core-aligned tests were originally trumpeted as a major improvement over earlier exams in their ability to assess student learning, but they haven’t been the “game-changer” Education Secretary Arne Duncan had promised. Here’s why.

Pearson, the company that designs the tests for the New York State Education Department, says that the brand names in the tests they designed are “part of previously published passages due to choices made by authors.” Here the company’s statement about it:

As part of our partnership with NYSED, Pearson searches for previously published passages that will support grade-level appropriate items for use in the 3-8 ELA assessments. The passages must meet certain criteria agreed upon by both NYSED and Pearson in order to best align to Common Core State Standards and be robust enough to support the development of items. Once passages are approved, Pearson follows legal protocols to procure the rights to use the published passages on the assessment on behalf of NYSED. If a fee is required to obtain permission, Pearson pays this fee. NYSED has ultimate approval of passages used on the assessment.

As one of the main shifts of the Common Core State Standards is to help students read and analyze more authentic literature and workplace documents, brand names are referenced occasionally in the passages. Neither Pearson nor NYSED request that these brand names be added, eliminated, or changed. The brand names are not selected, but exist as part of previously published passages due to choices made by authors. Pearson and NYSED do not receive any financial compensation for product branding that is included in a passage or an item. If a brand is mentioned in a passage or item, the trademark symbol is included in order to follow rights and permission laws and procedures.

When a state testing program decides to use only authentic passages, the inclusion of brand names is inevitable. It should also be noted that passages are not edited for use on the assessment, unless permission to do so has been granted. Preserving the passage in its original state is part of the effort to present material students are likely to encounter in college or the workforce. As standard protocol, NYSED does not request the editing of passages, including the reference to products. In rare instances, if a correction to the original text is required (e.g., incorrect facts or incorrect punctuation), permission is sought to make that correction, and the change is only made if permission is granted.

As a practice, Pearson follows all trademark/copyright laws for art, products, photography, and text.This is not a new practice this year in New York State or for any Pearson product; it is part of Pearson’s ongoing attempt to provide material that meets the modern landscape of assessment while following important laws and regulations.

Teachers and students said yesterday’s multiple-choice section of the eighth-grade tests name-dropped at least a handful of companies or products — including Mug Root Beer, LEGO and that company’s smart robots, Mindstorms.

IBM, the comic book and TV show “Teen Titans” and FIFA — the international soccer federation — were also mentioned in the test booklets, some of them with what educators referred to as out-of-place trademark symbols.

“I’ve been giving this test for eight years and have never seen the test drop trademarked names in passages — let alone note the trademark at the bottom of the page,” said one teacher who administered the exam.

Students at JHS 190 in Queens said the inclusion of some of the brands both within and after the reading passages left them scratching their heads — particularly when the questions had nothing to do with them.

“For the root beer, they show you a waitress cleaning a table and the root beer fell on the floor and she forgets to clean it up. Underneath, they gave you the definition that it is a soda and then the trademark,” said Marco Salas, an eighth-grader at the Forest Hills middle school.

“I didn’t think they should put it there,” he said. “There is no reason for it. It is out of place.”

The new exams, created by the education arm of the firm Pearson, are the first issued by the New York state Education Department that will not be made public after they’re scored — so educators have gotten stern warnings not to discuss their content.

State officials have said the exams became too predictable and encouraged test prep when the content and format of the questions were publicly available.

The tests are also the first to rely heavily on unedited excerpts from nonfiction works — to which department spokesman Tom Dunn attributed the bump in trademarked and brand names.

“This is the first time we have had 100 percent authentic texts on the assessments,” said Dunn. “Any brand names that occurred in them were incidental and were cited according to publishing conventions.”

He said none of the firms paid to have their names included in the passages. Reps for IBM and LEGO said the firms were not involved in any way.