WHERE ARE THEY NOW?: Jaime Aquino 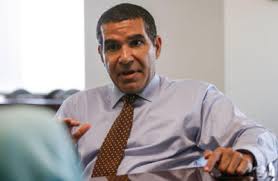 Saturday, March 8, 2014 :: Former LAUSD Deputy Superintendent for Curriculum and Instruction Jaime Aquino, who ankled The District in the brouhaha over iPads and office politics back in September of 2013, has landed on his feet at The New Teacher Center, where he is the NTC’s Executive Vice President of Strategy and Innovation.

Aquino briefly appeared at a NTC symposium on February 11th via a tweet – but now is quoted and cited with his new job title:

“During the keynote, we also heard from Jaime Aquino, NTC’s Executive Vice President of Strategy and Innovation. He stated that often, ‘We give teachers an inch, but demand a mile’.” | http://bit.ly/1lIN5yI

Without disputing it, 4LAKids is not sure what that quote means. Is it a comparison of teacher salaries to expectations of Academic Growth Over Time?

New Teacher Center is a ®eform-aligned educational non-profit, “dedicated to improving student learning by accelerating the effectiveness of new teachers and school leaders”. NTC is funded by corporate/family philanthropies like Packard and Gates and the New Schools Venture Fund  - plus government grants – and is based in Santa Cruz, where it was originally a program of UC Santa Cruz.

God help us, if Aquino is training new teachers and administrators in the wonderful corporate, test-test-test, arts-are-worthless model he pushed in LAUSD.

loisep.....God help you and your negative IGNORANT attitude..... if the parents of ALL LAUSD students truly spent time and knew his true dedication to improve LAUSD's quality of instruction and his vision for our kids.... HE WOULD NOT BE IN NY. Unfortunately, we can't fight all battles of politics.