The 10 candidates running for president of United Teachers-Los Angeles seek to lead a dispirited and divided teacher corps with common grievances but who lack consensus on how to move forward. 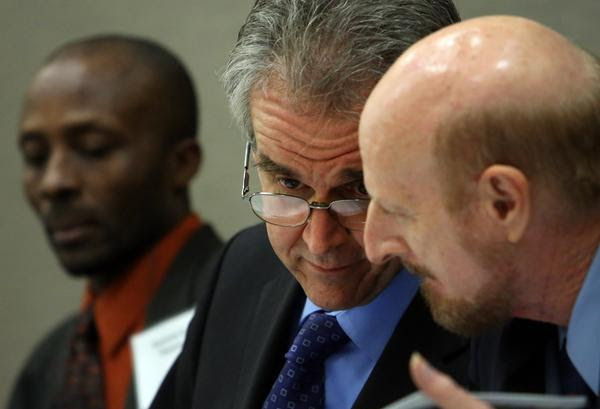 March 9, 2014, 7:10 p.m. ::  One candidate to head the Los Angeles teachers union was laid off. Another was removed from the classroom for alleged misconduct. A third lost his position when his school was restructured with new staff because of low test scores. A fourth is an elementary school counselor who must shuttle between two campuses.

Ten candidates are vying to be the next president of United Teachers-Los Angeles, the nation's second-largest teachers union. Their misfortunes run the gamut of what can go wrong for teachers, especially in recent times.

They seek to lead a teacher corps that is substantially dispirited and divided, with common grievances, but lacking consensus on how to move forward. Candidate ideas include becoming more — or less — adversarial with the district and changing the color of union T-shirts from red to pink or orange to seem less aggressive.

The leader of the union not only affects its 31,552 members but also half a million students.

"UTLA is a major stakeholder in the fight for quality education," said Marqueece Harris-Dawson, president of Community Coalition, a local social action group. "The quality of their leadership — or the lack thereof — looms large."

Incumbent Warren Fletcher seeks a second and final term for a three-year position that pays $101,000 annually. The ballots were mailed out in late February and will be tallied March 20.

The L.A. Unified School District is slowly recovering from years of budget cuts that forced thousands of layoffs of teachers, counselors, nurses and others. UTLA, other unions and the district are battling over how best to use moderate increases in funding. There's also contention over the growth of charter schools, most of which are non-union, and a new teacher evaluation system that relies, in part, on student test scores.

Against the backdrop of perennially low student achievement, the district must decide how to achieve new state learning goals, while it also embarks on a $1-billion technology program and prepares for new state tests.

Fletcher, 54, said that since he became president, teacher layoffs and furlough days have stopped. And he insisted that he has made no major concessions to L.A. schools Supt. John Deasy on issues critical to teachers.

"In the last three years we have stopped the free fall," Fletcher said at a recent candidates forum. But his administration needs more time, he said. Fletcher contends that he's always made sure that the voice of the members is his "primary driver of decisions."

The challengers counter that an improving economy ended the layoffs, and that while Fletcher has stood by Deasy and his allies have successfully maneuvered around the union on such issues as teacher evaluations.

The union president speaks for the membership publicly and is a crucial figure for setting priorities and negotiating contracts. But the union's structure also is cumbersome and, without a strong president, it's difficult to bring the factions together.

Virtually every challenger has a grievance with Fletcher, the union or L.A. Unified that is distinctly personal.

Veteran community activist and social studies teacher Alex Caputo-Pearl, 45, had hoped to spend his career at Crenshaw High in Hyde Park. But when Deasy ordered the school reorganized, Caputo-Pearl and most other teachers were removed.

Caputo-Pearl said he could revive the union. He said he has the endorsement of 250 campus union representatives and also has assembled a slate of candidates for the union offices other than president.

Caputo-Pearl represents a left-leaning activist wing that has rejected Fletcher. Gregg Solkovits, 57, is the standard bearer for some traditional union stalwarts who also have deserted Fletcher.

Solkovits, whose mother once served as union president, taught English and social studies at Monroe High in North Hills for 28 years, 15 as the union representative. A longtime union officer, he's now a vice president. He faults Fletcher for allowing 25% of schools to lack a local union leader and says he could unite members and mold the union into an effective institution.

Bill Gaffney, 64, became active in UTLA after a districtwide payroll snafu left him without a paycheck for three months. The union, he said, did nothing to help him. The science and physical education teacher has been the union representative at Fulton College Preparatory in Van Nuys for six years.

He faults UTLA leadership for being needlessly adversarial with district officials, missing opportunities to reach common ground that could benefit students as well as teachers.

David R. Garcia, 43, blames the union for not being adversarial enough. He characterizes union and district leadership as a corrupt, greedy cabal. An art teacher, Garcia has been unable to land a permanent position since he was laid off from Jefferson High in South Los Angeles several years ago.

He wants to reduce union dues, ban union officers from serving consecutive terms, open all union meetings to the public and force the senior leadership to teach at least part-time.

Marcos Ortega II, 51, has been suspended from his post as a social studies teacher at Van Nuys High. The district doesn't comment on investigations, but Ortega said he broke up a sexual assault and later was accused of aggressive, inappropriate behavior. He's among about 500 teachers pulled from classrooms for extended periods since 2011.

His distinguishing idea is for UTLA to abandon red as its color for T-shirts and protests.

"Red is the color of blood and communism," he said at one forum, adding that orange or pink would transmit a more positive message to the public.

Leonard Segal, 58, serves as the UTLA representative for substitute teachers in the San Fernando Valley. Regular substitutes were routinely displaced during the recession by laid-off teachers, frequently losing the benefits they formerly earned.

Segal is using the campaign as a vehicle to voice the concerns of substitutes and to promote his ideas. His website, however, endorses Fletcher as the best choice among candidates with a chance to win.

Innocent Osunwa, 50, formerly taught in the adult school, which also has seen massive cutbacks. He now teaches English at Stevenson Middle School. He said that his teaching experience in various settings as well as his multiple degrees and multilingual skills, give him the background to provide steady leadership.

Kevin Mottus, 47, is among the depleted ranks of counselors, who are part of the teachers union; he deals with students on two campuses. He asserts that the increased microwave-style radiation from wireless technology in classrooms is lethal to students and teachers. He says the district should return to "wired" technology.

Saul Lankster, 69, vowed to get rid of the current union legal team, and said his No.1 priority would be to end so-called teacher jails. These are the administrative offices to which teachers report while under investigation for misconduct.

The Huntington Park High teacher formerly served as a board member for Compton Unified.

Candidate statements can be found at http://www.utla.net/unitedteacher. Their responses to a common set of questions are at http://www.educators4excellence.org/utla2014. 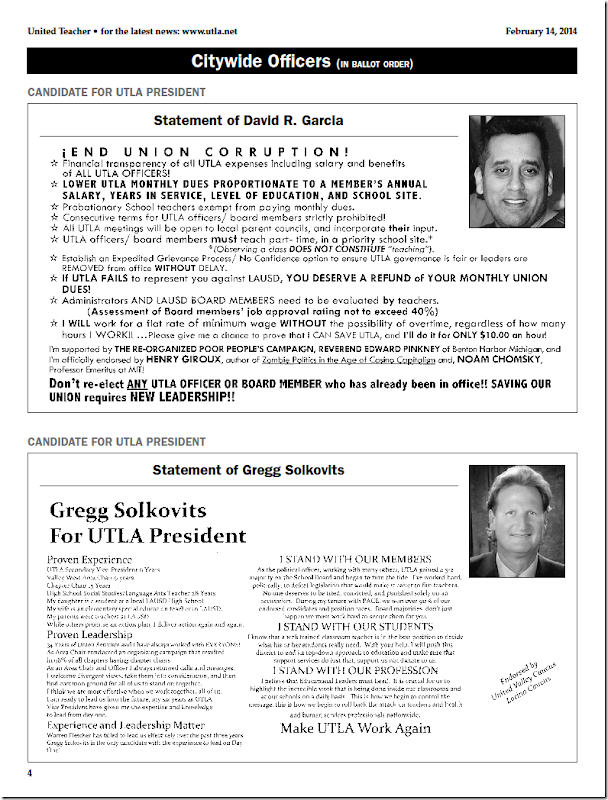 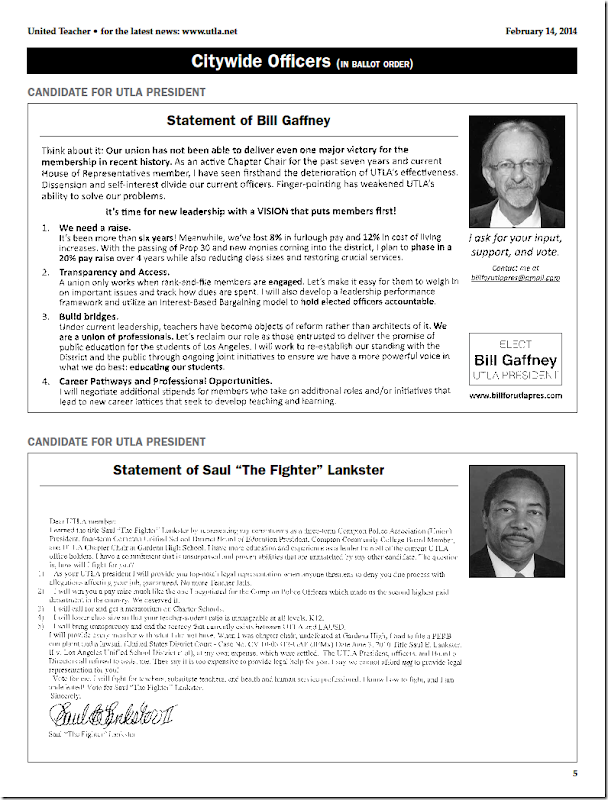 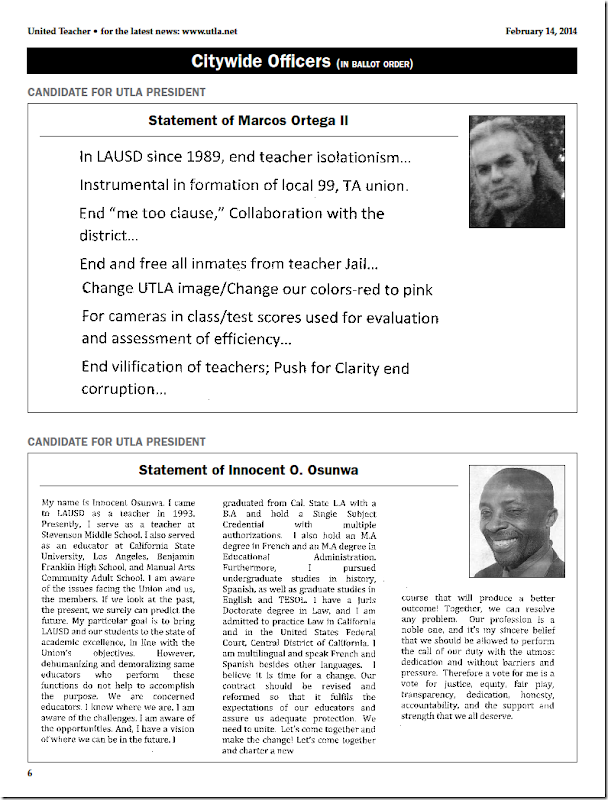 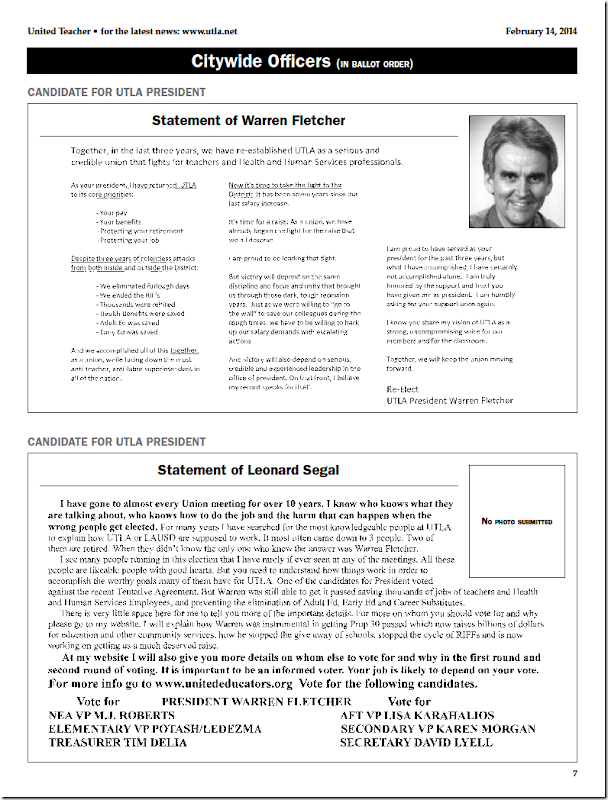 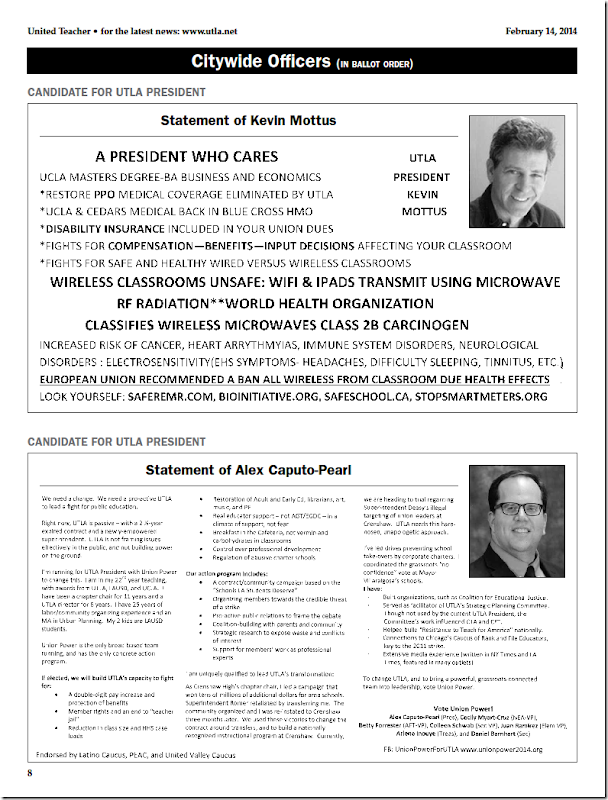 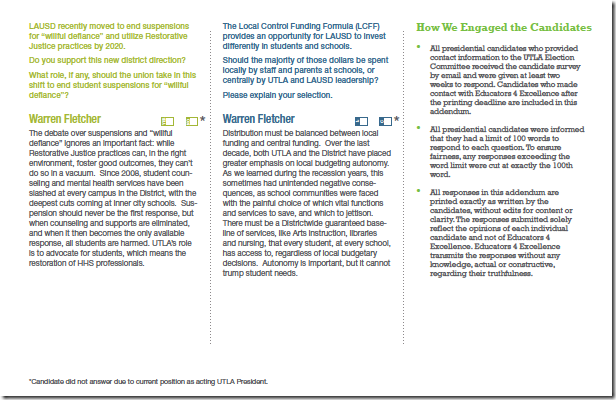 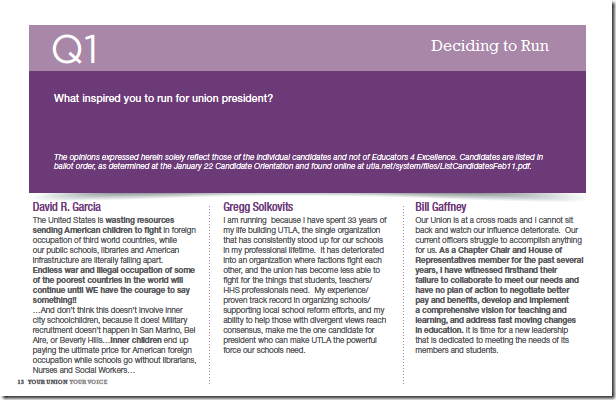 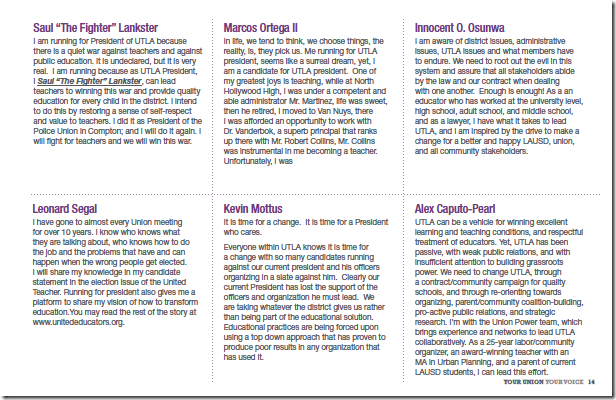 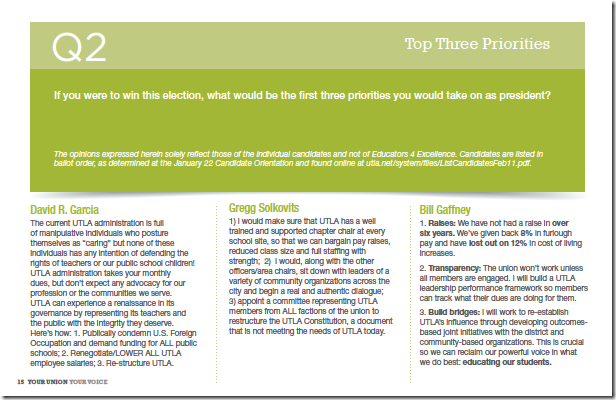 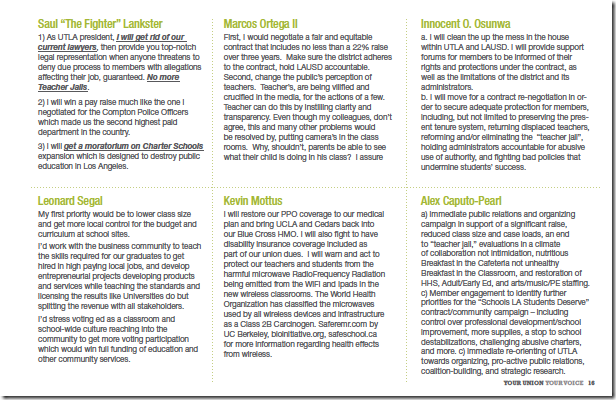 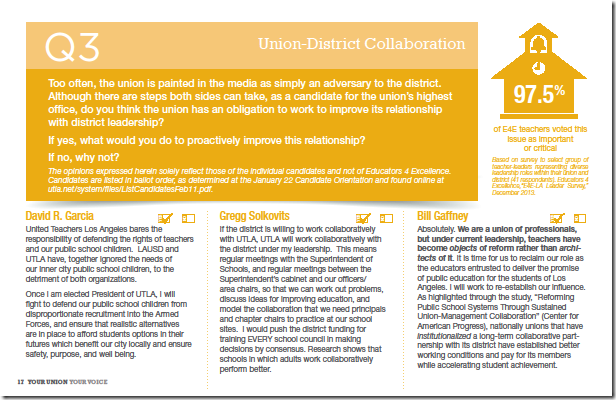 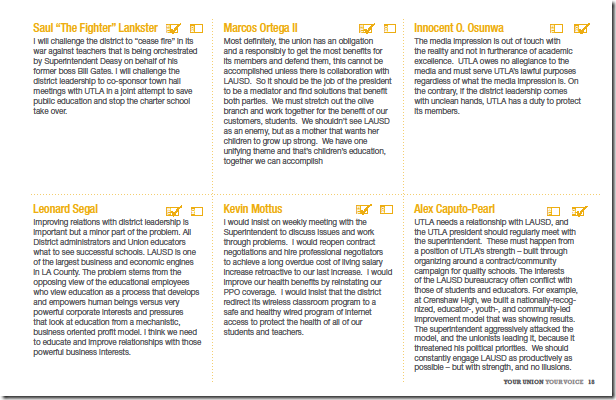 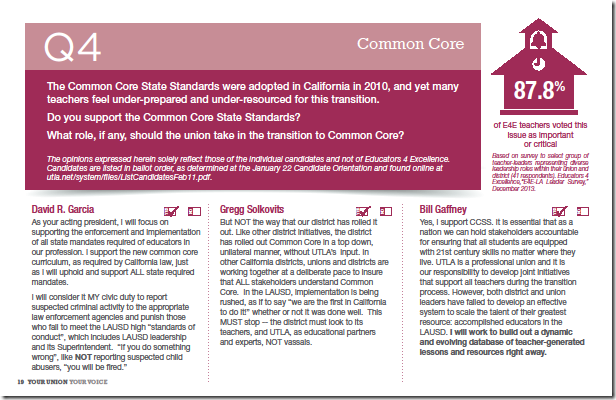 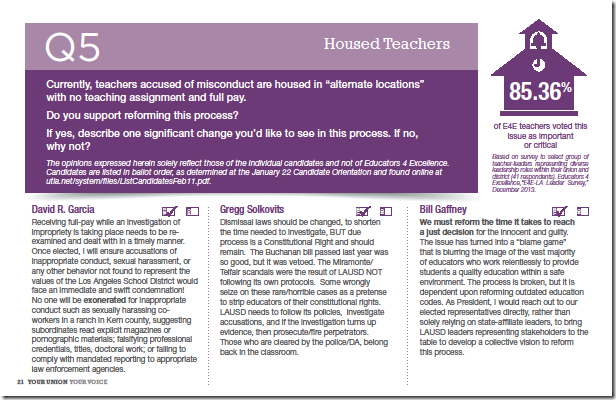 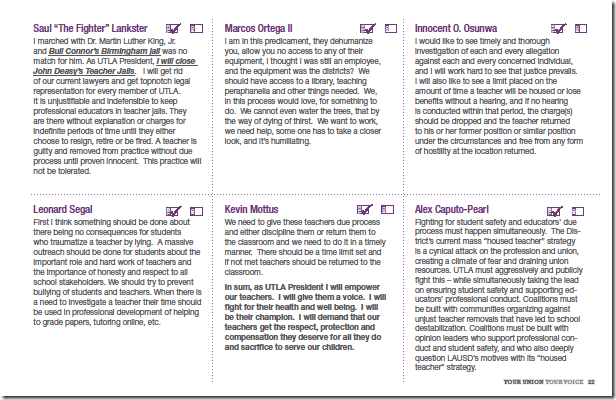 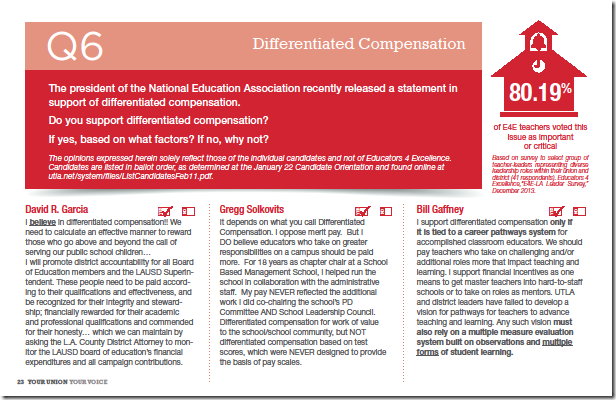 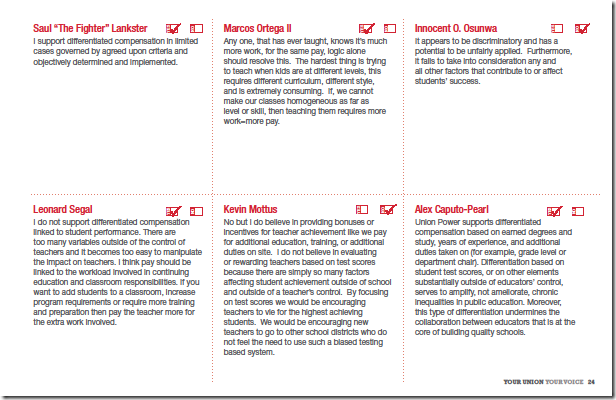 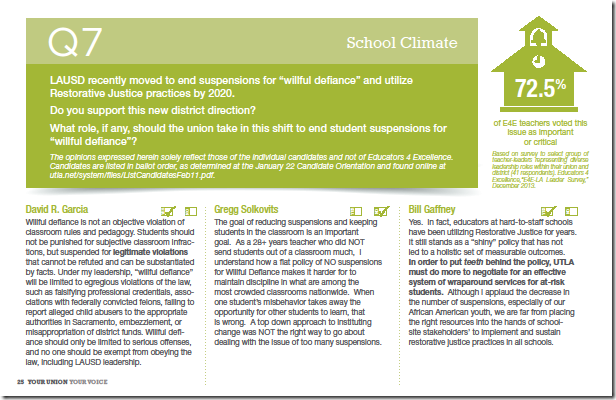 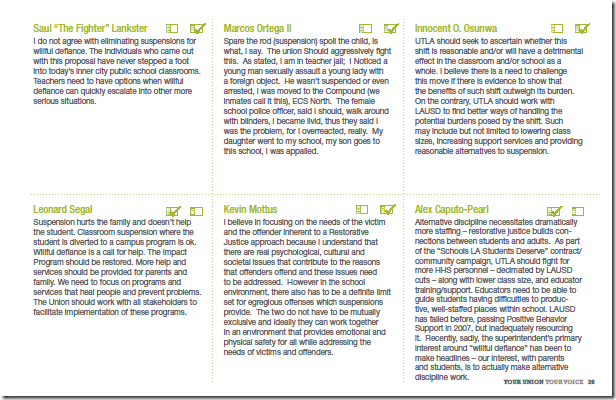 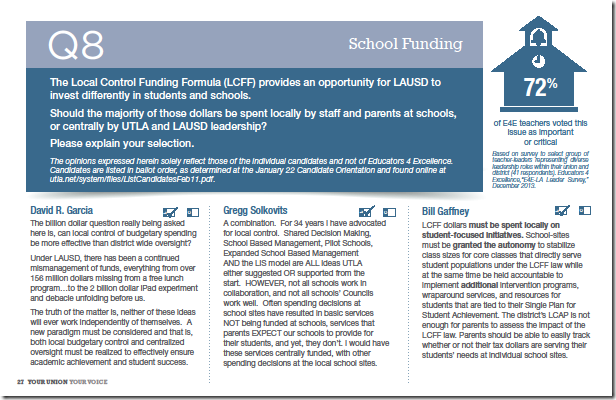