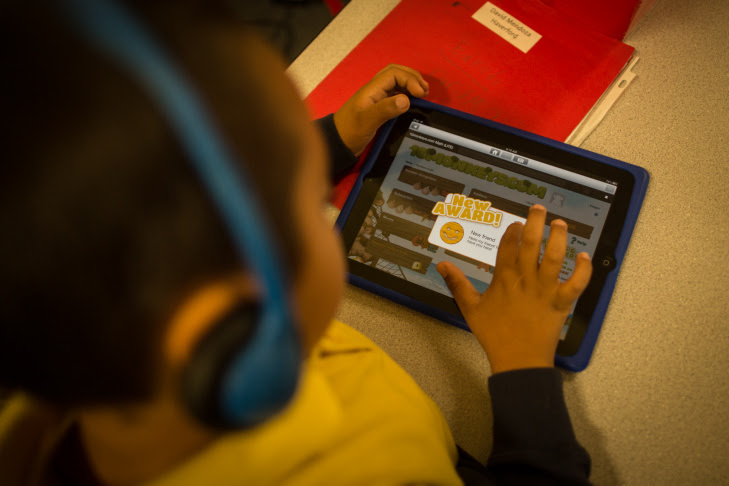 Grant Slater/KPCC : A student at KIPP Comienza in Huntington Park plays ST Math to review the week's material. The game tracks his progress and gives him harder activities as he masters skills. It's the type of interactivity L.A. Unified reviewers said they were looking for, but ended up choosing a program with no games or assessments.

March 10th, 2014, 5:00am  ::  When the Los Angeles Unified School District set out last year to buy tablets for every teacher and student, officials drew up a scoring system to rate 19 hardware and software options.

The scores meant a lot: the contract will ultimately be worth about $500 million and marks the largest school technology expansion in the country.

The winners were Apple and global education publisher Pearson PLC, which received nearly twice as many points as the next highest software bidder.

But there was a hitch: Pearson’s software wasn’t ready – and it still isn’t.

Since the contract was awarded last summer, school board members have laid into administrators for buying unfinished materials – and for paying nearly $800 per software-equipped device. The school district's Inspector General has also begun probing the purchase.

L.A. Unified's selection process has been kept mostly out of public view, even as questions have emerged.

School board members have yet to see the materials administrators evaluated to make their choice. Pearson has for months turned down board member requests to show them the software, saying it would violate Apple’s contract. Pearson officials now say they will provide a demonstration of the software.

“It was one of the worst things I agreed to as a school board member,” board member Steve Zimmer said, adding he had trusted reviewers to find the very best fit for the very best price. “I’ll never make that mistake again.”

To learn more about the selection process, KPCC pieced together district records evaluating the bidders and conducted interviews with educators, students and software developers. The reporting raises questions about the district's process for choosing the software.

Some competitors weren’t scored at all, and at least two popular, gamed-based educational software programs appear to have been scored incorrectly, discarded as “digital textbooks.”

Unlike Pearson’s bid, many of the losing software packages were fully developed and already being used at dozens of L.A. Unified campuses. Principals report the programs are boosting student learning, helping bring struggling students up to grade level.

L.A. Unified declined to comment on the bid review process - and would not provide KPCC all the bid materials.

To submit bids, software and hardware companies had to team up to offer complete packages, which included lessons for each grade level. Proposals came from the biggest hardware companies - including IBM and Google - and textbook powerhouses like Houghton Mifflin Harcourt and McGraw-Hill.

According to district records, the software had to take advantage of the tablet format: it had to be tactile, interactive, use multimedia and games and share data.

Of the 19 options the district reviewed last spring, officials provided KPCC records showing only 13 "finalists" were scored - but only provided score sheets for nine. They would not give the criteria for selecting finalists or explain why four finalists' score sheets were missing.

The three top scorers all used Pearson. In fourth place was an iPad package with five software products bundled together to meet the district’s criteria to provide materials for K-8 in math and K-12 English. The district gave the bundled package 5.8 points – about half of the 11.1 score officials gave Apple/Pearson. The highest possible score was 22.5.

“The devices come with a full digital integrative curriculum – aligned to the Common Core in English Language Arts and Mathematics, Kindergarten to 12th grade,” Jaime Aquino, then-Superintendent for Instruction, told the school board at a meeting in June where he asked the board to approve the purchase.

Judy Codding, a Pearson executive in charge of the iPad software, said L.A. Unified didn’t mind the software was still in development.

"It's a new set of standards and new set of assessments - that's an awful lot," she said. "So what L.A Unified said is we want the first semester, the kids and teachers to try a few lessons."

L.A. Unified would not allow KPCC to inspect the materials provided for the bids, so KPCC contacted the five software companies that were bundled by Apple for the fourth-highest score. Lexia Learning Systems and Mind Research responded.

“The part my students need most is the basics of learning how to read," said Wilshire Park Elementary 4th grade teacher Manny Graniel.

He loves how Lexia’s sequential games let students who are still learning English progress at their own pace. The program has an assessment component that speeds students past skills they already know and slows down when they hit things they don’t. He said the program also engages students’ different senses in learning.

"It's everything. They hear it, they see it, they say it,” he said.  “It has an animation aspect so it keeps it high interest."

When scoring it as part of Apple's bid, district officials gave Lexia’s program a zero in digital quality: no points for games, adaptability or teacher resources.

“Kids love it because Lexia is very interactive,” Benda said. “The interface is very useful for both the students and the teachers.”

Every day, Benda and his teachers peer at live data reports showing how each individual student is progressing.  They have the option of downloading Lexia’s “hard copy” activities and lesson plans for one-on-one tutoring.

By comparison, district evaluators gave Pearson’s software – which, according Codding, doesn’t have games or a synchronized system to track students’ ability – 1.4 points for digital quality. The maximum was 3.

Bundled along with Lexia’s English Language Arts materials in Apple’s bid was ST Math. Short for Spatial-Temporal Math, the program has been in schools for 15 years. The manufacturer, Mind Research, spent $5 million aligning the materials to Common Core learning standards – another big part of L.A. Unified’s criteria.

On the iPad for almost two years, ST Math is also a game-based learning program. One third-grade unit has students use their fingers to divide up boxes amongst animals.

There’s hardly any text in the game at all.

“There is no language involved, and in fact in earlier levels, there aren’t even any symbols,” Nisbet said. “Everything is purely visual. The students are interacting, learning by doing.”

The other programs bundled with ST Math and Lexia were Houghton Mifflin, Power 3000 and News Corp’s Amplify, which, like Pearson's software, was still in development at the time.

A review of the score sheets also showed inconsistencies in how the same software was judged when submitted by different vendors.

ST Math was also part of two bids submitted by school technology vendor Arey Jones - one on an HP ElitePad and another on a Dell Latitude 10 tablet.

KPCC compared ST Math’s score sheets for all three bids and found it scored even worse in the Arey bundles. On the HP tablet, ST Math got zeroes in almost every section for a total content score of 0.3 of a possible 4.5.

Codding, the Pearson executive, said a key strength of its proposal is that it was the only one to offer a single-source, complete curriculum for all grade levels.

But L.A. Unified reviewers saw only a sliver of the content. Pearson prepared a couple of sample units, covering about a month of instruction each, for the bid. Records show one was a second-grade English Language Arts unit. Neither Pearson nor district officials would say which other demos were provided.

The full Pearson build out is scheduled to be completed in the fall.

Codding said it’s taking so long because, rather than updating old materials for the new standards, Pearson sought to build a new package from scratch.

So far, the district has spent about $150 million for 100,000 iPads, accessories and costs of getting them into schools. Full rollout would provide devices to 650,000 students and another 26,000 teachers.

When the cost of training and internet access are included, the entire project will cost around $1.3 billion.

It’s unclear how much Pearson stands to make from the deal. The agreement between Apple and Pearson is sealed. School district administrators say they haven’t seen it, and Apple won’t reveal the breakout costs.

In January, the school board pressured L.A. Unified officials to renegotiate the deal.  The last batch of 45,000 tablets was bought without the Pearson software and will be used for standardized testing next month. The district paid around $200 less per device, suggesting the add-on for the software is about that much.

Ron Chandler, the district's chief information officer, told a committee probing the purchase the plan is to eventually add software.  But he said they have yet to decide which software products to buy.