March 14, 2014 12:00 PM  ::  One of the two state consortia developing exams aligned with the Common Core State Standards is giving itself an additional week to iron out any glitches before field-testing begins.

The Smarter Balanced Assessment Consortium, which counts 23 states as members, had planned to begin field-testing March 18. Schools will now begin the process on March 25, according to a consortium official. (Twenty-two states and the U.S. Virgin Islands are involved in Smarter Balanced field-testing; Pennsylvania is an "advisory" state and isn't participating.)

The delay isn't about the test's content, officials said: It's about ensuring that all the important elements, including the software and accessibility features (such as read-aloud assistance for certain students with disabilities) are working together seamlessly.

"There's a huge amount of quality checking you want to do to make sure that things go well, and that when students sit down, the test is ready for them, and if they have any special supports, that they're loaded in and ready to go," Jacqueline King, a spokeswoman for Smarter Balanced, said in a March 14 interview. "We're well on our way through that, but we decided yesterday that we needed a few more days to make sure we had absolutely done all that we could before students start to take the field tests."

Field-testing will take place through June 6. Some 3 million students in 20,000 schools are participating. Smarter Balanced expects most of the schools that would be affected by the delay to reschedule sometime during the field-test window. The group will also offer a "make-up week" from June 7-13 for schools that request it.

Most importantly, the brief delay won't delay the next steps in development, during which researchers analyze the results of the field tests to make sure that all of the test items are working as expected and generating the appropriate information.

"It won't have any impact on the subsequent work that we need to do," King said.

It's not entirely clear how many schools are affected. Some states don't have any schools in the first week of testing.

In most states, those students participating in the field tests take them in only one subject, English/language arts or mathematics. Five states are testing nearly all their students, and some of those, like California, are giving some version of the tests in both subjects to meet the U.S. Department of Education's "double testing" waiver requirements.

The other testing group, the Partnership for Assessment of Readiness for College and Careers, or PARCC, still plans to begin field-testing March 24.

“Field-testing will take place through June 6. Some 3 million students in 20,000 schools are participating. Smarter Balanced expects most of the schools that would be affected by the delay to reschedule sometime during the field-test window. The group will also offer a "make-up week" from June 7-13 for schools that request it.”

smf: That's all very well+good. Except that June 5th is the last day of school for almost all LAUSD schoolchildren.

The previous article from KPCC [NEW CALIFORNIA STANDARDIZED TEST - SCHEDULED TO START NEXT WEEK - POSTPONED FOR A WEEK: http://bit.ly/1eCjqQc] quoted Smarter Balanced Testing Director Jacqueline King that there’s no extra cost to postpone the start date. That comment – about disrupting the testing schedule for millions schoolchildren in tens-of-thousands of schools across 22 states fails the Test of Reality.

Following  is the LAUSD Testing Calendar, as it was before this happened. It a complicated+convoluted affair; consider all the testing scheduled between now and the end of the year. 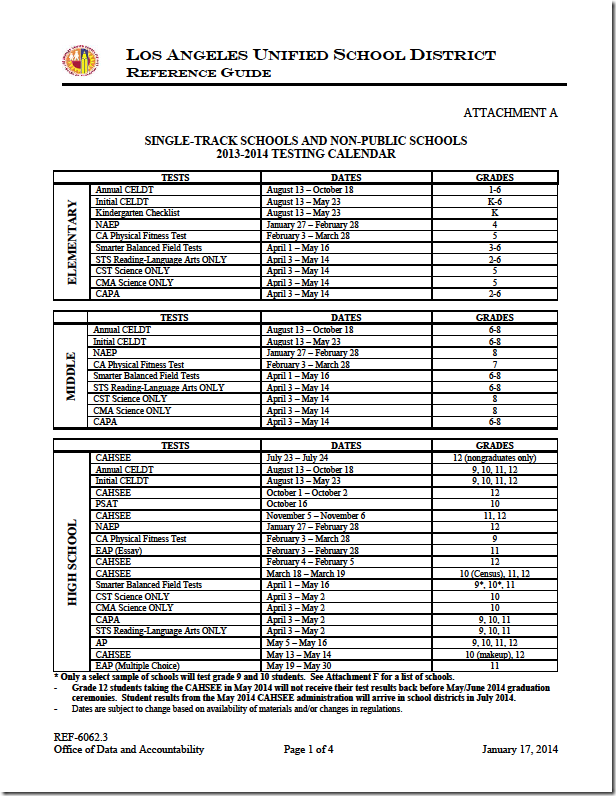