In discipline, access to education and other factors, data on U.S. public schools show patterns of inequality tied to race. 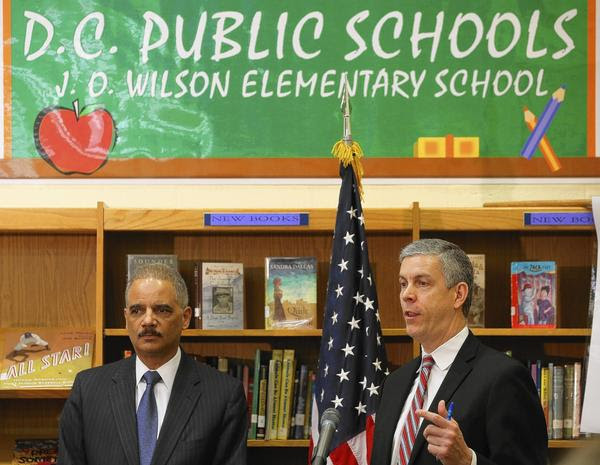 March 21, 2014, 10:07 p.m.  ::  WASHINGTON — Two-fifths of the nation's public school districts offer no preschool programs, and most of those that do offer only part-day programs. Black students account for less than a fifth of those in preschool across the nation but make up almost half of the students who are suspended from preschool multiple times.

Those results from the first comprehensive survey in nearly 15 years of civil rights data from the 97,000 U.S. public schools show they remain marked by inequities. The report released Friday by the Department of Education's Office of Civil Rights, which includes data from the 2011-12 school year, offers no explanation for the stark differences.

Duncan denounced the inequities as "socially divisive, educationally unsound, morally bankrupt and economically self-destructive." He said the report "paints a stark portrait of inequity," adding that "this must compel us to act."

The report found that black students were three times more likely to be suspended and expelled than white students.

Holder said these results confirmed that the "school-to-prison pipeline" is a reality for boys of color. "A routine school discipline infraction should land a student in the principal's office," Holder said, "not in a police precinct."

But he also said there were no plans to modify security measures in schools. "We want to support schools and make sure that we keep these schools safe," while being mindful not to contribute to the school-to-prison pipeline, he said.

Friday's report also highlighted racial inequities in access to education. For example, a quarter of the high schools with high percentages of black and Latino students do not offer Algebra II.

Blacks, who compose 16% of the total school population, represent 27% of students referred to law enforcement and 31% of students subjected to a school-related arrest, according to the report.

Pacific Islander, Native American and Native Alaskan children were also two times as likely as their white peers to be held back.

The report found that more than 8,000 toddlers out of more than a million had been suspended from preschool.

Walter Gilliam, an associate professor at Yale University who has conducted research on expulsion rates among black preschoolers, said the report did not provide enough context for a deep analysis but confirmed previous findings on early childhood school discipline.

There is a "grave overreaction to discipline" in early education, he said, citing a 2012 incident in which a Georgia kindergartner was arrested and handcuffed for throwing a tantrum in the classroom.

"The reason that we have preschool programs in the first place is to help give children an opportunity to be successful," he said. Expelling kindergartners makes as much sense as "taking sick people out of hospitals."

Another finding revealed that 1 in 5 high schools lacked even a single counselor.

He noted that President Obama had proposed a $300-million program in his budget to encourage "state and district efforts to aggressively tackle achievement and opportunity gaps."

"We just need Congress to catch up with what's going on in the real world," Duncan said.

But, Holder acknowledged, "achieving these goals will not be easy, and progress will not take hold overnight."

●●see also: 3 stories: Young black males DISPROPORTIONATELY SUSPENDED …EVEN WHEN THEY ARE PRESCHOOLERS in the March 23rd 2014 edition of 4LAKids