Officials didn't take into account long-standing (community+gang) rivalries when they decided to transfer about 280 students from Boyle Heights to Lincoln Heights, critics say. 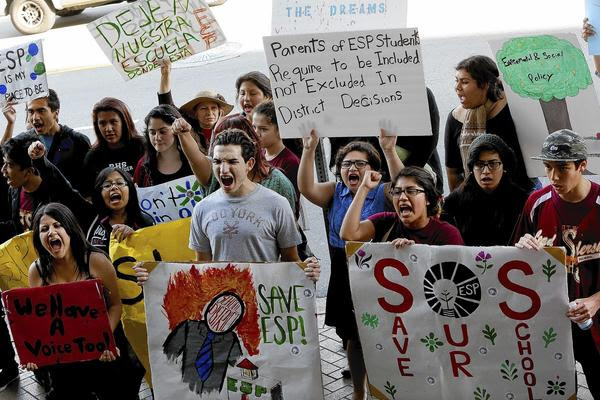 March 16, 2014, 9:10 p.m.  ::  The two schools are a two-minute drive apart in similarly low-income, largely immigrant neighborhoods. But to hear students tell it, the two places might as well be different planets.

Lincoln High School in Lincoln Heights, located on the edge of Chinatown in a hilly area of Victorian dwellings and low-rent apartments, is home to 29,000 residents, mostly Latino and Asian.

The Academy of Environmental and Social Policy is a small campus affiliated with Roosevelt High School in Boyle Heights, an enclave of 91,000 mostly Mexican American residents, small businesses and a burgeoning arts scene.

The two neighborhoods, however, maintain fierce pride in independent identities — a sense that carries over to what police say is more than 25 gangs on both sides with long-standing rivalries, some of which go back decades.

And that is one reason why a recent decision by the L.A. Unified School District to relocate the Roosevelt academy to Lincoln High for the coming school year, quietly made without input from students or parents on either side, is now escalating into a bitter furor.

The academy's supporters say the move will effectively dismantle their program, which they credit with boosting student achievement through closer ties between faculty and students. Many are also resentful that district officials have not responded to fears about the potential danger of crossing gang lines.

"Putting two rival communities on one campus will be a big mess," said Genevieve Virgen, a Lincoln student leader.

Supt. John Deasy, however, has said that the Roosevelt academy's enrollment, now about 280, is projected to further decline well below the 425 students needed to run a full academic program at fiscally sustainable levels. Deasy said the academy must leave its current location at the East Los Angeles Skills Center because the district wants the space to expand adult education classes.

Deasy has pledged to provide transportation to Lincoln to ensure students' safety, keep the full faculty in place even if enrollment drops and likely approve its conversion to a magnet program, which will allow the school to recruit pupils citywide.

But academy supporters are refusing to back down from their request for one more year to increase their enrollment and look for an alternative Boyle Heights location. Last week, students from both schools met and pledged to unite to protest the move.

Nearly two dozen students, parents and teachers confronted Board of Education member Monica Garcia at a meeting last week to press for answers on why community members were not consulted.

Meanwhile, the decision has been panned by many who know the complex dynamics between the two neighborhoods. Father Gregory Boyle, who has long worked with gang-affiliated youth in the Eastside through his Homeboy Industries, said the move was a "recipe for disaster."

Carey Ricard, who spent more than two decades as a Los Angeles Police Department gang detective in the Hollenbeck Division before recently retiring, said the Roosevelt students would be far safer at their current location, which he described as a neutral area that benefits from high security around nearby Los Angeles County-USC Medical Center. In contrast, he said, Lincoln Heights was currently the Eastside's toughest hub of gang activity.

'I don't think this is a good idea at all," Ricard said. "The kids who are not from the area won't know what gang turfs are where or which streets to avoid."

And former City Councilman Ed Reyes, who represented Lincoln Heights for more than two decades, criticized district administrators who "do not know the area and would be blind to the day-to-day differences and minefields these kids have to confront every day." He said the offer to provide transportation would not protect students who want to stay after school for sports, clubs or tutoring.

"You are putting kids in harm's way unnecessarily," Reyes said.

Donna Muncey, a district administrator overseeing the move, said people's voices should be heard, but some have suggested that such safety concerns "may be somewhat exaggerated."

L.A. Unified Police Chief Steven Zipperman said he initially told the district that campus security would be sufficient to ensure student safety but that he would revisit issues raised at the recent school board committee meeting. There, some students told Garcia that if any students were harmed at Lincoln, "it will be in your hands."

After the meeting, Garcia told the group she supported the school, took responsibility for the communication breakdown and pledged to visit the academy to discuss the issue.

"We are absolutely interested in making sure students are safe," Garcia said.

At Lincoln High, news of the impending move has also set off anxiety. Lincoln has accepted some students who, after it became known they were affiliated with Boyle Heights gangs, were beaten up and forced to leave, according to school staff.

Other students predicted tensions would erupt if Roosevelt's Rough Riders refused to embrace new identities as Lincoln Tigers. They also worried that the move would force their teachers to reshuffle classrooms and possibly draw away their students – causing them to lose counselors or instructors. But Maximo Carlos, a Lincoln football player, said the two student groups could forge bonds through sports.

Muncey, however, said she did not believe the district would reconsider its decision. She said officials have worked since last year to address the academy's problems with the Partnership for Los Angeles Schools, the nonprofit started by former Mayor Antonio Villaraigosa, which oversees Roosevelt and other campuses. District officials decided that Lincoln would be the "best fit" for the academy after its faculty rejected Deasy's offer last month of moving there, returning to Roosevelt's main campus or disbanding, Muncey said.

But some community members are still holding out. Mike Garcia, a long-time gang intervention specialist in Boyle Heights, said the district should hold a forum to hear from students, families and local experts about the neighborhood dynamics before making any final decision.

"East L.A. is real territorial, and it's known you don't cross from one side to the other," Garcia said. "But these bureaucrats think they're smart with their PhDs and think they can figure it out themselves."