On the vendor side of things, selling tablets to schools is often big business. Amplify, which sells cheap Android tablets to school districts, is still trying to make good on its sale to Guilford schools following incidents of melting chargers and cracked tablets.

On the school administration side, bring tablets to classroom is often seen as a major achievement for the district. The question is how to do it: all at once for every classroom, and incrementally.

From Apple’s own education site for the iPad

In Los Angeles, schools Superintendent John Deasy is pushing on with efforts to introduce iPads to 38 more school campuses, part of a $1 billion tech initiative. In January, the school board approved moving forward with the program after an initial trial at 47 schools. But the use of iPads, versus cheap tablets, has been controversial due to both the cost of the devices – the school district is paying $768 per iPad – and where the money to fund the effort is coming from – school construction bonds.

William J. Johnston, the former L.A. schools superintendent, yesterday said that funding a tablet effort through school bonds was illegal, according to the L.A. Times. His objection is not about tablets, per se, but about what the bonds are meant to fund – long term construction.

“iPads are known to last for approximately three years,” Johnston wrote to the committee overseeing the program. “New developments and technology will make them obsolete, requiring replacements. School bonds are designed to buy property, build schools, equip schools with lasting equipment. School bonds are paid for over a 25-year period.”

Johnson has a valid point. But when considering such a massive program there may not be another source of funding large enough to cover a school district the size of the Los Angeles Unified School District. LAUSD is the second largest school district in the nation, with over 650,000 students, and over 30,000 teachers, and 1,124 schools to administer.

When public schools are in such massive disrepair it is hard to argue with those that say funds should go to fixing drinking fountains and repairing classrooms. But adding iPads to the classroom directly effects the teaching situation. The question remains for many districts whether to allow themselves to be sold by vendors offering cheap goods, or whether they will develop their own programs, fully educated themselves in the device choices and the pricing, so they can make intelligent decisions that can be presented and defended to the public – and parents, in particular. 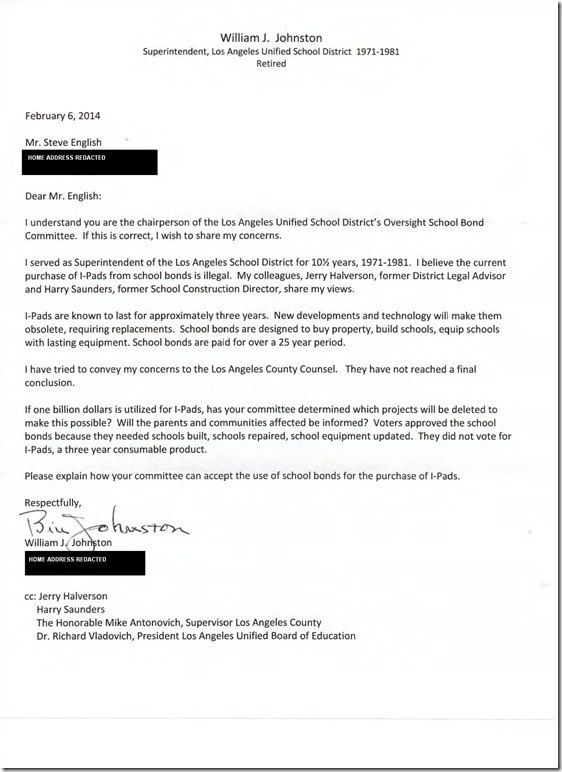 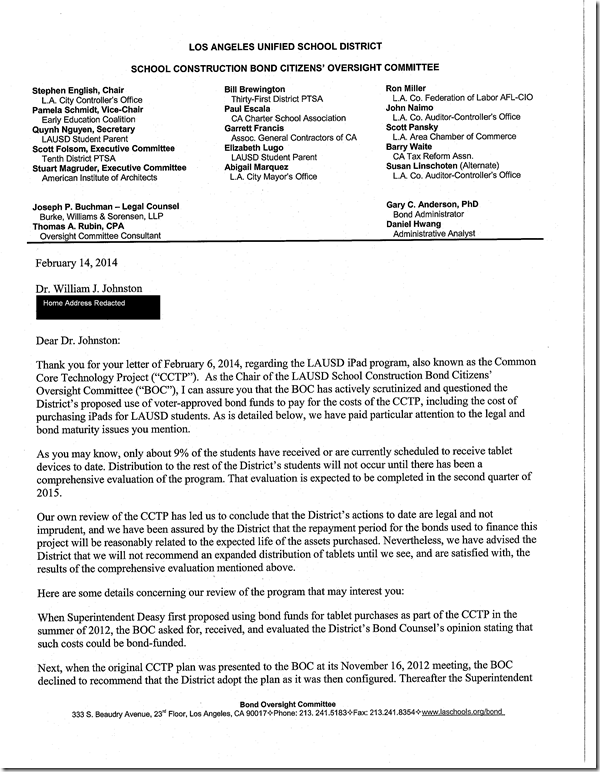 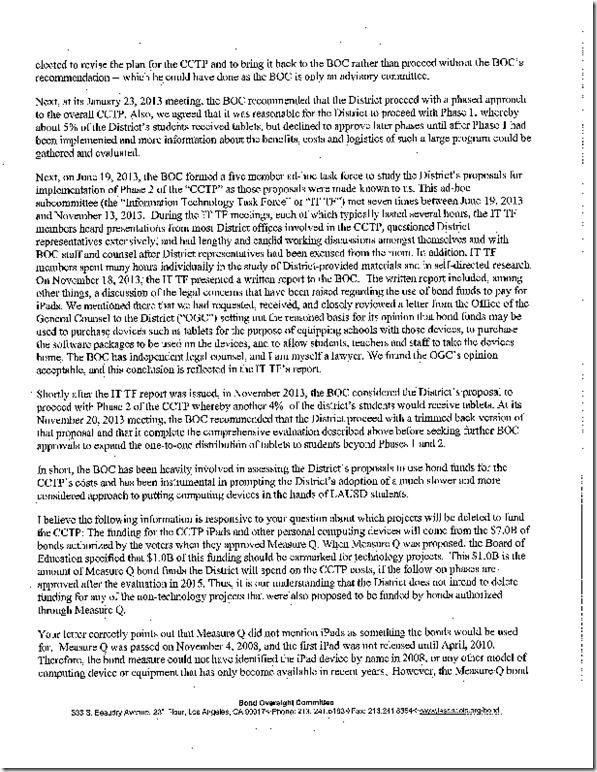 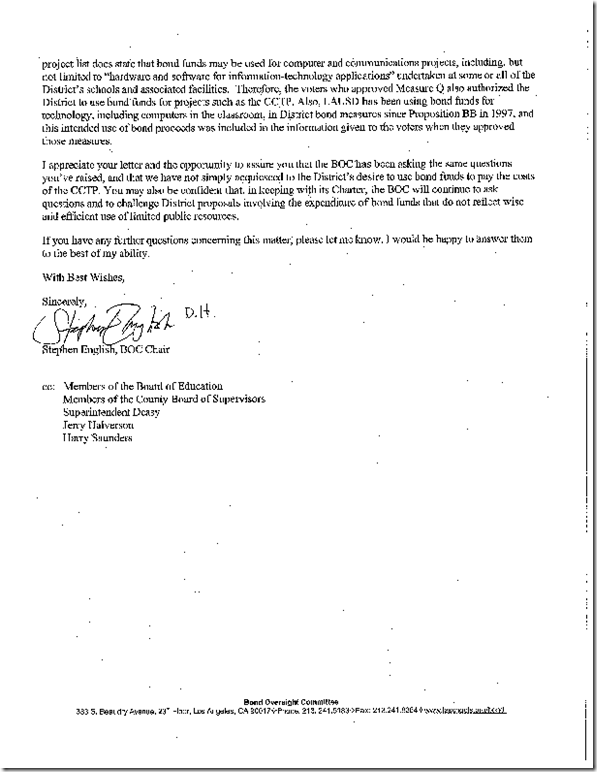 smf:  I certainly thank Superintendent Johnston for his concern and his letter …and Chairman English for his response.

I have made it clear here and in public pronouncements that I am unhappy with the urgency and lack of transparency of Superintendent Deasy’s CCTP rollout – and have qualms about the selection process and the RFP that ended up selecting Apple as the vendor and Apple’s contract with Pearson as the content provider.

The questions about Dr. Aquino’s previous relationship with Pearson – and Dr. Deasy’s relationship with Apple – and his stated preference for Apple and Pearson – and his naming of the tablets as “iPads” before the the contract was awarded is worrisome. The connection between folks on the selection committee – and receipt of gifts of Apple merchandise by selection committee members  from Pearson appears to be a conflict of interest.

I have yet to see a definitive legal opinion from counsel for the bond underwriters that allowing students to take the bond-funded devices home is legal – indeed bond counsel had questions about this -  and it is that missing legal opinion – or one from a trial judge – that settles the debate.

Pearson’s poor performance and occasional forays into illegality in other contracts with other school districts and state offices of education is abysmal. Pearson was once banned from contracting with LAUSD for impropriety.

Meanwhile there is legislation in Sacramento, AB 1754 that will establish once and for all that none of this is legal– and important Democratic lawmakers seen inclined to support AB 1754. The passage of AB 1754 would, I believe, block any future CCTP purchases under this contract – and court action could hold that the use of bond funds was never legal whether or not AB 1754 could be enforced retroactively.

The current rush-to-purchase in response to the upcoming meaningless Smarter Balanced Field Test is a farce.

Mostly I think Superintendent Deasy and LAUSD have done a piss-poor job of selling a program they obviously believe in to the public, to voters and taxpayers. How do you not reach out and engage folks like Bill Thompson?  That is a political+communications failure of the first rank!

No matter what you think of the man you must concede that they fired their best CCTP cheerleader in Jaime Aquino.

I haven't seen Apple come out to defend the contact.

I haven't seen Pearson cone out to defend the contract.

And nobody seems prepared to answer Bill Johnson’s most important question: What is it we  will not be doing because we’re doing this?

In the end Dr. Deasy and “The Sponsors” on the 24th floor have been unable to convince the public or the media  or Superintendent Johnston …and they are rapidly losing the little of me they had.