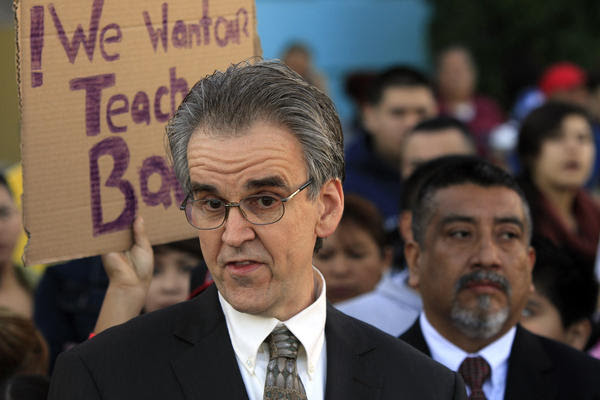 The basis of the complaints would be data that, according to Fletcher, show that older, higher-earning teachers are the “overwhelming targets” of a disciplinary system officials have defended as necessary to protect students.

Fletcher's stand, his most aggressive position yet on this issue, is laid out in a survey of the 10 candidates running for president of United Teachers Los Angeles. Fletcher is seeking a second and final term.

The survey was conducted by the L.A. chapter of Educators 4 Excellence, a foundation-funded group that has sought to recruit teachers. (Fletcher filed his responses after the printing deadline so they will be an addendum to the group’s booklet.)

The candidates are scheduled to debate at a forum Tuesday night in Boyle Heights that is sponsored by Educators 4 Excellence.

All candidates expressed dissatisfaction with the district’s handling of teacher discipline. In the wake of a teacher’s high-profile misconduct at Miramonte Elementary, hundreds of instructors across L.A. Unified have been pulled from classrooms awaiting the conclusion of investigations. These teachers typically report daily to district administrative offices, referred to as “teacher jails,” where they wait out the workday.

Some of Fletcher’s challengers have accused him of not reacting strongly enough on the issue.

The union mailed ballots to teachers on Feb. 25. They will be counted on March 20.

The most personal response on the teacher discipline issue was from Marcus Ortega II.

“I am in this predicament,” he said. "We want to work; we need help. Someone has to take a closer look, and it’s humiliating.”

Leonard Segal talked of helping students understand the consequences of a making a false or exaggerated accusation against a teacher.

Alex Caputo-Pearl said the discipline practices amounted to a “cynical attack on the profession and union, creating a climate of fear and draining union resources.”

New state learning standards drew some diverging opinions. Kevin Mottus called them a “dumbing-down of the curriculum” that “seeks to serve the average rather than the excellent.”

Most supported the standards, but with caveats: “I will work to build out a dynamic and evolving database of teacher-generated lessons and resources right away,” said Bill Gaffney.

The candidates split fairly evenly on ending suspensions for “willful defiance” -- the category that includes students' refusal to follow the instructions of school staff. Saul Lankster said such suspensions provided needed “options when willful defiance can quickly escalate into other more serious situations.” Gregg Solkovits said the smarter approach would be to reduce such suspensions as much as possible rather than to issue an outright ban.

Opinions ranged widely on the idea of potential changes in calculating teacher pay, which is currently based on experience and education. Innocent Osunwa said switching to more of a “merit” system “has a potential to be unfairly applied.” David Garcia said he could favor such a system in principle, but would like it applied to the district leadership, so that top officials no longer received full pay no matter how they performed.