March 20th, 2014, 3:11pm  ::  Members of the L.A. Unified school board and a committee investigating the iPad project were given the first demonstration of the tablet's educational software Wednesday evening - but the public wasn't invited and a KPCC reporter was not allowed in the room.

The afternoon meeting with Apple and global education materials publisher Pearson was conducted in the school board's meeting room. Doors were locked and guarded by a security guard and a staffer checking names off a list. Those not invited - including a reporter - were told they were "trespassing" and asked to leave.

"This is the equivalent of us being in a conference room upstairs talking to a vendor," said Greg McNair, an attorney for the school system, outside the boardroom doors.

Controversy has surrounded the software since the start of the program in the fall. L.A. Unified purchased Pearson's program, the Common Core System of Courses, for the iPad based on only a few lessons and promises that the entire K-12 curriculum would be completed by the start of next school year, more than a year after the contract was awarded.

Board member Monica Ratliff, chair of the Common Core Technology Project Ad Hoc Committee probing the purchase, has been asking to see Pearson's program for months.

Ratliff was initially told Apple, the primary contract holder, wouldn't permit it. Later, Pearson scheduled a viewing for her, but canceled less than 24 hours ahead of the January 14th meeting.

Ratliff said she was then told she wouldn't be able to view the software for a few more months while the company bid a high school technology project at the district. At a committee meeting earlier this year, Ratliff called that a ridiculous excuse.

Finally, a review of the software was scheduled at district headquarters for Wednesday. The invitations, obtained by KPCC, said high school content would be excluded because a "cone of silence" has been placed on the high school laptop software bids.

Peter Scheer, at the First Amendment Coalition, said a closed door review like this would not violate California's open meetings law, the Brown Act, as long as no more than two board members were present. Only board members Monica Ratliff and Bennett Kayser attended the afternoon meeting, according to district spokeswoman Shanon Haber.

Apple and Pearson representatives actually participated in two meetings at district headquarters Wednesday - one at 10 a.m. and another at 5 p.m.

The L.A. Unified contract was highly coveted - 19 hardware and software bids came in. An investigation by KPCC found many serious software competitors — with finished, tested products — were turned down in favor of Pearson's unfinished product. Some game-based learning software was incorrectly deemed "digital textbooks."

If fully implemented, the contract with Apple and Pearson is worth about $500 million. Apple will not disclose Pearson's cut. Even district officials said they are kept in the dark but the number is likely in the 10s of millions.

Below is an edited clip of reporter Annie Gilbertson being shut out of the meeting. The other voices are district security guard Able Ochoa, McNair, and an unidentified district employee.

smf: I attended the meeting as an ex-officio  member of the Board of Ed Curriculum, Instruction and Assessment Committee - and there was no content in the presentation that the public should have been denied access to. It was a pretty cut-and-dry (if positively promotional) presentation of the Pearson Common Core Systems of Courses as currently available on the LAUSD iPads. 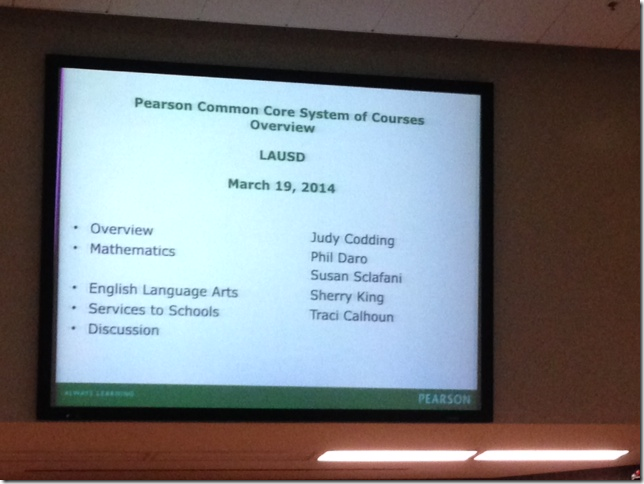 I am not an educator, I leave it to the professionals to adjudge the content and completeness of the Pearson’s content. I am waiting impatiently to hear that opinion. I certainly question the wisdom of entering into a contract of this size and scope with these sorts of terms.

But in the end it’s not about the process – its about the value of the educational content – and here are all reliant upon “take my word for it”.

The question “Why has the media been excluded?” was asked and answered by District staff.  District procurement executive Hugh Tucker said that ground rules for the demonstration established by Apple as prime contractor specifically  forbad the press being present. Representatives from Pearson at the front of the room and  representatives from Apple (unintroduced but identified as such to me) at the back of the room did not refute that statement.