L.A. SCHOOL BOARD TO CONSIDER EXPANSION OF COMPUTER SCIENCE OFFERINGS 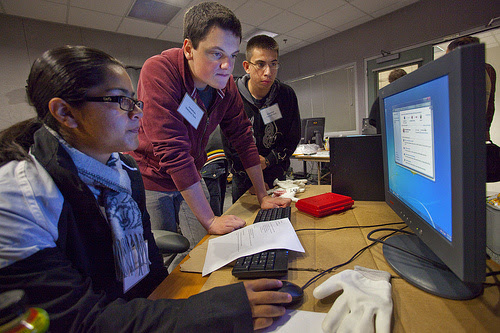 March 3rd, 2014, 6:00am  ::  Offering computer science classes at California high schools is a challenge because of a shortage of qualified teachers.

An initiative to address the shortage of computer science offerings in the L.A. Unified School District will go before the school board Tuesday. Only one-in-three of the district's high schools are offering a basic course this year, and far fewer are offering the Advanced Placement Computer Science course.

"We definitely are in this incubation stage as a district," said David Azevedo, district director for board member Tamar Galatzan, who authored the resolution.

"We imagine we will need a lot more teachers. We may need some kind of curriculum component that may cost money, whether it be textbooks or software," Azevedo said.

The resolution directs Superintendent John Deasy to survey what schools currently offer, including after-school and enrichment opportunities. The administration then has 90 days to respond with an expansion plan and associated costs.

KPCC found earlier this year that not a single A.P. Computer Science class is offered in south or east Los Angeles — some of the city's poorer neighborhoods.

Chris Stevenson, director of the Computer Science Teachers Association, said it's vital that more students get a foot in the door — not just in California, where tech jobs are estimated to swell by half a million over the next few years, but across the country.

"There is no doubt that computer science is privileged knowledge," Stevenson said. "Kids that are most likely to have access to these courses in their schools are white and middle- and upper class.”

Finding teachers — and paying them — is another roadblock. Computer science is listed by the U.S. Department of Education as a teacher shortage area in California, and recession-era budget cuts still have schools scrambling to keep the staff they already have.