School board candidates meet at forum

In first faceoff, candidates call for more funding for most needy children.

Thursday, March 6, 2014 12:58 pm  ::  Candidates for the vacant First District seat on the Los Angeles Unified School District Board of Education squared off in a forum in South Los Angeles Monday, with three candidates calling for more funding.

“The Board of Education or the policy makers have to be focused on adequate resources not just some resources, but for the neediest children,” George McKenna, a retired school administrator, said at the forum organized by the National Action Network Los Angeles at Mt. Moriah Baptist Church.

McKenna said he believes the neediest children are in the First District, where he has lived and worked for 50 years.

Omarosa Manigault, who is known for her appearance on “The Apprentice,” said the “main focus” of her campaign “is children.”

“As a LAUSD certified substitute teacher [who] focuses on special education, I am in the classroom every day and my concern is that our students are in environments that are safe for them, that are clean, that are healthy and that they have the things that they need to succeed,” Manigault said.

Genethia Hudley-Hayes, a former school board president, said she wants to focus on sufficiently funding classrooms.

“Sufficiency funding means that all schools that have been under resourced for 20 or 30 years now become fully resourced so that all of those students have an opportunity to have a teacher in the classroom who has wrap-around services for those youngsters and she can do her job,'' Hudley-Hayes said.

The seat became vacant when board member Marguerite LaMotte died Dec. 5. The election will be held June 3. If no candidate receives 50 percent of the vote, a runoff will be held Aug. 12. 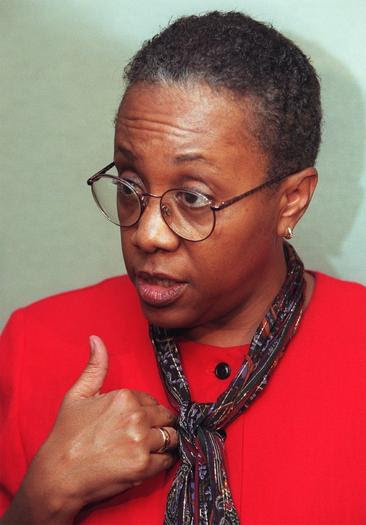 Former school board member Genethia Hudley-Hayes is facing a challenge related to an honorary doctorate as she runs to regain a seat on the Board of Education. ( Los Angeles Times / October 13, 1999)

March 7, 2014, 7:20 p.m.  ::  Friday’s filing deadline for a key Los Angeles school board race also marked the first major dust-up between candidates. The campaign for Alex Johnson has unearthed documentation that opponent Genethia Hudley-Hayes failed to earn a doctorate for which she has been credited.

In 2010, Hudley-Hayes asserted in her resume that she had earned a doctorate in 2000 from American University with a specialization in public policy. The claim was repeated in press releases that year noting the appointment of Hudley-Hayes to important public posts: one as an L.A. city fire commissioner; the other as a special trustee to manage the Compton Community College district.

The Hudley-Hayes campaign called the listing “clearly … a typo.” The intended reference, said campaign consultant Parke Skelton, is not to American University in Washington, D.C., but to an honorary doctorate from American World University. Critics have accused the online school of being a diploma mill.

“Mrs. Hudley-Hayes does not even list the honorary degree on her current resume, although people who receive honorary degrees frequently cite them,” Skelton said in a statement.

Skelton released the accusations after meeting with a campaign consultant for Johnson.

“It is truly disturbing to me that Alex Johnson and his campaign have nothing better to do than hire private investigators to dig up dirt on their opponents in an effort to attempt to bully them out of the campaign,” Skelton said Friday.

With the school district “facing so many crises, our children deserve better,” Skelton said.

Roy Behr, who works for Johnson, characterized his meeting Thursday with Skelton differently.

“I don’t personally know Ms. Hayes, but she seems like she’s had a long career of public service and it would be a shame if this became her lasting legacy,” Behr said. “We wanted them to have the option of dealing with it in a way that did not publicly tarnish her legacy,” Behr said.

He added: “Parke knows a candidate for school board cannot posssibly survive falsifying their academic credentials.”

Hudley-Hayes, 68, has a long record of public service, including one term on the L.A. Board of Education and heading the city Fire Commission.

On Friday, the Hudley-Hayes campaign also dealt with other accusations. It confirmed that Hayes never served on the California Commission on Teacher Credentialing, as had been claimed on a version of her biography as a board member for L.A. Unified. Instead, said Skelton, Hayes served on a task force working on behalf of the commission.

Skelton said Hayes never saw or noticed the inaccuracies in the press releases and district biography.

Both Johnson and Hudley-Hayes are considered strong contenders for District 1 on the Board of Education, which stretches across south and southwest Los Angeles. The seat became vacant with the death of Marguerite Poindexter LaMotte in December.

The primary election will take place in June. Friday marked the deadline for turning in petitions, signed by district voters, that are necessary to qualify for the race. As of noon Friday, Hudley-Hayes and Johnson both had qualified. Other confirmed candidates were George McKenna, Hattie B. McFrazier, Sherlett Hendy Newbill and Omarosa O. Manigault. Candidates still awaiting confirmation of their petitions were Alison Alis Noel and Rachel Johnson.