March 6th, 2014  ::  Eight minutes into a public meeting on how to reform the state’s vast special education system, the woman who ran special education in California for nine years came up to the microphone. Alice Parker was blunt.

“I wish I could have a ‘do-over’ for the 45 years I worked in special education,” Parker, who retired in 2005 as director of the California Department of Education’s Special Education Division, told representatives of a new Statewide Special Education Task Force at a public forum Monday. Parker regretted a system that she said has a history of labeling children as barely able to learn, rather than revamping the way teachers provide instruction in reading, writing, speech and math – particularly for the vast numbers of students with learning disabilities.

In an interview after the meeting Parker, who also served as an assistant superintendent of public instruction in the state, added: “Our kids aren’t disabled, our system is.”

Parker and many of the 25 parents, teachers and advocates who attended the  forum on a rainy afternoon in Redwood City strongly urged the task force to press forward with its work of re-envisioning how the state educates nearly 700,000 children in special education. Those students make up about 10 percent of all public education students and have a wide range of disabilities, including dyslexia, speech impairment and autism.

The three-hour meeting at the San Mateo County Office of Education was the second of seven public forums scheduled by the 34-member task force, which was formed in November at the request of State Board of Education President Michael Kirst and Stanford School of Education Professor Linda Darling-Hammond, who also chairs the California Commission on Teacher Credentialling. The task force is charged with recommending policy and legislative changes to address areas including finance, teacher preparation and the delivery of special education services.

In its project summary, the task force called attention to the persistent achievement gap among students in special education and the prevailing view that special education should operate as a separate system, isolated from general education programs that teach the vast majority of the state’s students. The group noted that some school districts across the state are providing what research has established as more effective systems of integrated supports for disabled students, but that this was far from the norm. The group is expected to make its recommendations to the State Board of Education, the California Commission on Teacher Credentialing and the California Department of Education in late 2014.

Learning disabilities such as dyslexia and dyscalculia (difficulty learning math) represent the largest category of California students in special education – about 45 percent – followed by the categories of speech and language impairment (18 percent) and autism (10 percent.) Less prevalent categories are health impairments such as leukemia or Tourette syndrome, intellectual disabilities, emotional disorders, hearing or vision impairment and traumatic brain injury.

Repeatedly, speakers at the meeting praised the task force’s efforts to change an education culture that they said often sent the message that students who receive special education services aren’t capable of achieving.

Sue Digre, a retired second grade teacher and the parent of a now-grown child with Down syndrome, said that she was often told in special education meetings not to expect that her child could learn much. ”Too often, it’s a ceiling,” Digre said. “You’re told, they’ve met their potential.”

Alyson Sinclair, a Marin County parent of a student with disabilities, echoed the call for improved training for all teachers – both general education and special education. And she said that superintendents could do more to demonstrate that students who receive special education services are first and foremost students in the school, the same as any other students.

“It’s the adults who are stymieing the children,” she said.  To the task force members  she said, “I applaud everything you all are doing.”

As described in an outline of the task force’s mandate, a key issue that it will take on is how to transform special education ”from being a place where students go to receive more or different services, to a viewpoint that includes special education services as one of many programs of support under the umbrella of general education.”

Task force co-executive director Barber responded that the group was focused on improving special education services, not diluting them. Making those improvements, including providing effective instruction for students with potential reading and math disabilities before they become labeled as special education students, requires changing practices in general education, she said.  ”If you’re going to change special education, you can’t do it in isolation,” Barber said at the outset of the public meeting. “You have to make sure our general education folks are with us.”

The next public forum of the task force will be in Riverside on March 17.

smf - from the Task Force’s raison d'être:    “During the past decade, the ®eform movements toward greater accountability have highlighted the achievement gap that exists among students based on race/ethnicity, family income, language ability, and disability.” 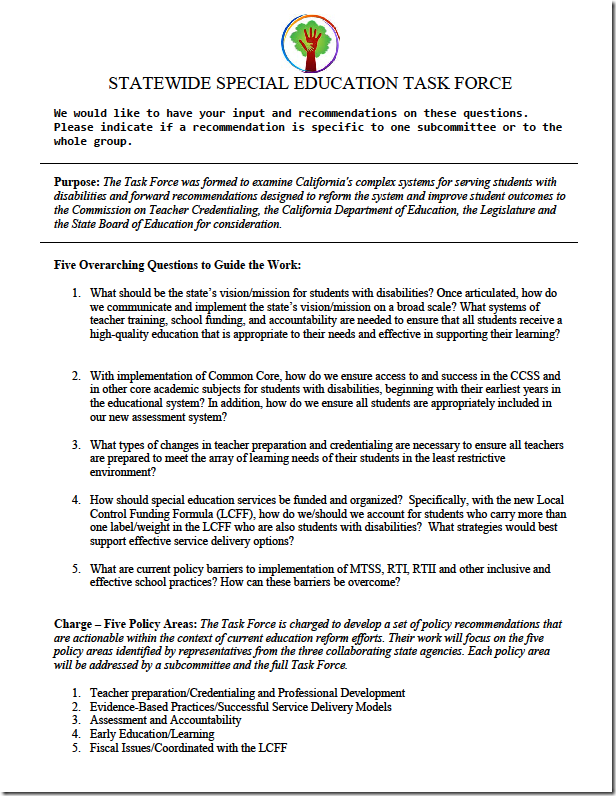 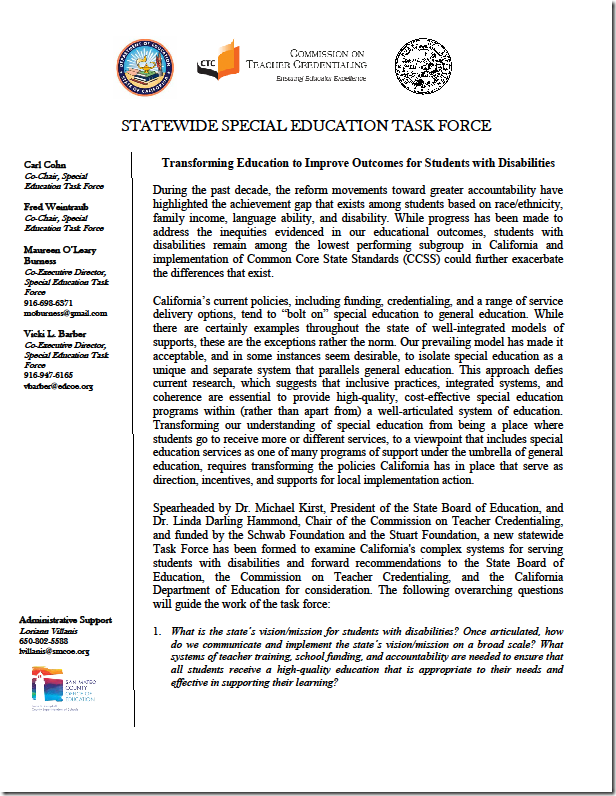 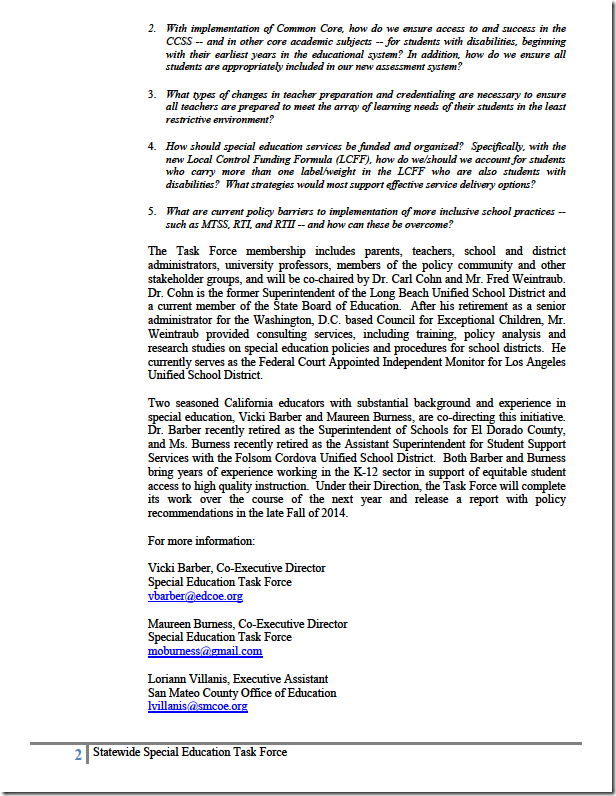