STATES LISTEN AS PARENTS GIVE RAMPANT TESTING AN ‘F’ 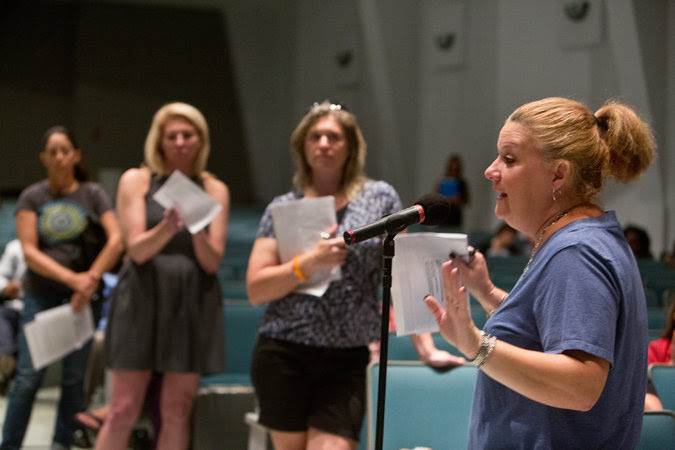 NOV. 9, 2014  |  ROYAL PALM BEACH, Fla. — Florida embraced the school accountability movement early and enthusiastically, but that was hard to remember at a parent meeting in a high school auditorium here not long ago.

Parents railed at a system that they said was overrun by new tests coming from all levels — district, state and federal. Some wept as they described teenagers who take Xanax to cope with test stress, children who refuse to go to school and teachers who retire rather than promote a culture that seems to value testing over learning.

“My third grader loves school, but I can’t get her out of the car this year,” Dawn LaBorde, who has three children in Palm Beach County schools, told the gathering, through tears. Her son, a junior, is so shaken, she said, “I have had to take him to his doctor.” She added: “He can’t sleep, but he’s tired. He can’t eat, but he’s hungry.”

One father broke down as he said he planned to pull his second grader from school. “Teaching to a test is destroying our society,” he said. 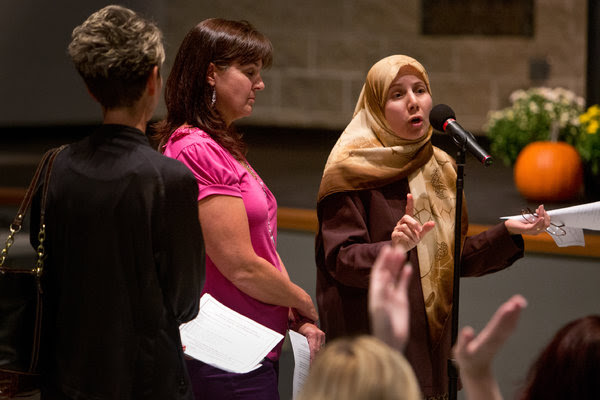 Where once these frustrations were voiced in murmurs, this year not only parents but also educators across Florida are rebelling. They have joined a national protest in which states have repealed their graduation test requirements, postponed the consequences of testing for the Common Core — national standards in more than 40 states — and rolled back the number of required exams.

In August, Education Secretary Arne Duncan added to the chorus when he wrote in a blog post that “testing issues today are sucking the oxygen out of the room in a lot of schools,” and that teachers needed more time to adapt to new standards and tests.

Last month, state school chiefs and the heads of large city districts were the latest to express their concerns by committing to review the panoply of tests students must take.

In Florida, which tests students more frequently than most other states, many schools this year will dedicate on average 60 to 80 days out of the 180-day school year to standardized testing. In a few districts, tests were scheduled to be given every day to at least some students.

The furor in Florida, which cuts across ideological, party and racial lines, is particularly striking for a state that helped pioneer accountability through former Gov. Jeb Bush. Mr. Bush, a possible presidential contender, was one of the first governors to introduce high-stakes testing and an A-to-F grading system for schools. He continues to advocate test-based accountability through his education foundation. Former President George W. Bush, his brother, introduced similar measures as governor of Texas and, as president, embraced No Child Left Behind, the law that required states to develop tests to measure progress.

The concerns reach well beyond first-year jitters over Florida’s version of Common Core, which is making standards tougher and tests harder. Frustrations also center on the increase this year in the number of tests ordered by the state to fulfill federal grant obligations on teacher evaluations and by districts to keep pace with the new standards. The state mandate that students use computers for standardized tests has made the situation worse because computers are scarce and easily crash.

“This is a spinning-plates act like the old ‘Ed Sullivan Show,’ ” said David Samore, the longtime principal at Okeeheelee Community Middle School in Palm Beach County. “What you are seeing now are the plates are starting to fall. Principals, superintendents, kids and teachers can only do so much. They never get to put any plates down.”

School districts across Florida have started to pare back the number of district-mandated tests. Palm Beach County announced recently that it would cut dozens of tests this year.

“This is the proverbial perfect storm of testing that has hit not only Florida but all the states,” said Alberto M. Carvalho, the influential superintendent of Miami-Dade County Schools, the fourth-largest district in the country, who was named the 2014 national superintendent of the year. “This is too much, too far, too fast, and it threatens the fabric of real accountability.”

Mr. Carvalho has joined other superintendents and school board members in the state in calling for a delay in the use of new tests, including the not yet validated Florida Standards Assessment — a Common Core variant, with tougher standards than the last assessment used — to grade the state’s schools, teachers and students.

Despite continued support in the Republican-dominated State Legislature for high-stakes testing, there are signs that Florida is headed for a showdown with opponents of an education system that many say is undermining its original mission: to improve student learning, help teachers and inform parents.

Responding to the growing outcry, Gov. Rick Scott in late August called for Education Commissioner Pam Stewart to investigate standardized tests, many of them state-mandated.

Robert A. Schaeffer, the public education director for FairTest, a standardized-test watchdog organization, said, “The numbers and consequences of these tests have driven public opinion over the edge, and politicians are scrambling to figure out how to deal with that.”

Much has changed this year in Florida. As part of the federal Race to the Top grant obligation, the state will require end-of-the-year tests for every subject to help evaluate teachers whose pay and job will be tied to scores. In Miami-Dade County, there are 1,600 courses. School districts are obligated to write the course exams, but the Legislature did not give them money for the task, so districts are far behind in developing them.

On top of routine classroom tests, students face an increase in district-led diagnostic tests to keep tabs on student progress. Some teachers are testing children biweekly. This is in addition to high school Advanced Placement, SAT and ACT tests.

But there is another requirement that has made testing more difficult in Florida. The state ordered all students, including those in elementary school, to take standardized tests on computers as of this year. But again, the state did not give districts extra money for computers or technology help.

Because schools do not have computers for every student, tests are staggered throughout the day, which translates to more hours spent administering tests and less time teaching. Students who are not taking tests often occupy their time watching movies. The staggered test times also mean computer labs are not available for other students.

The overlay of this year’s tougher Common Core-like standards — which has led to drops in test scores in cities like New York — also has students in a panic over falling grades. Teachers, too, are worried about how the scores will affect their evaluations. In Florida, students who fail the test can be held back in third grade or fail to graduate from high school.

The frustration over testing has spilled across the state. The Lee County School Board led the charge in August when it voted to opt out of state-mandated standardized testing during an emotional meeting in Fort Myers. It rescinded the vote shortly after it learned of the penalties the district would face. Miami-Dade just canceled one set of district-ordered interim exams to allow teachers and students more time in the classroom.

In Gainesville, one kindergarten teacher, Susan Bowles, explained to parents on her Facebook page that she would refuse to give state-ordered diagnostic reading tests. The kindergartners were obligated to take the tests one by one on a computer. After the first go-round, Ms. Bowles calculated it would eat up three weeks of teaching time.

Her public stance galvanized even more parents and educators. Not long after her posting, Ms. Stewart, the education commissioner, suspended that particular test for younger pupils. Parents and teachers across the state began to air their grievances, detail by detail.

“The emotional effect on students, teachers and parents has been damaging; the manifestation of sadness and frustration is real,” Mr. Carvalho said of the headlong rush into more tests. “And the state should pay attention to it.”