November 13, 2014 4:08 pm  ::  Building on her success investigating LA Unified’s controversial iPad program, Board Member Monica Ratliff is now asking for an overall examination into how the district allocates support for legal matters as a way to find added funding for improving school safety.

In two resolutions set to come before the board next Tuesday, Ratliff is calling for a report on litigation expenses, awards and settlements over the last five years arising out of child abuse accusations against district employees and in cases where criminal actions occur on school campuses.

The idea, according to Ratliff, is to redirect these funds toward boosting school police or other security measures and adding a second adult to all classrooms.

“Both resolutions call for analyses and plans to be done with all deliberate speed so that the Board and Superintendent can determine what, if any, logical and effective next steps in school security and safety need to be implemented as quickly as possible,” Ratliff said in a statement.

In recent years the district has paid out millions of dollars in child abuse or molestation settlements, some of which are still ongoing. The Miramonte Elementary School case in which a veteran teacher, Mark Berndt, was found guilty of lewd acts on 23 children, sending him to prison, is still in civil court, after $30 million in settlements for 65 victims. More plaintiffs are waiting their turn.

Although the district employs 41 attorneys in house, all of the Miramonte cases were outsourced to two high-level law firms, Andrade Gonzalez, LLP and Sedgwick LLP.

“Cases are outsourced when there is a capacity issue and/or specific legal expertise is required,” Chief General Counsel David Holmquist explained in an email to LA School Report.

“The vast majority of legal work is handled in-house, and the General Counsel’s office is continually increasing that amount. That said, outside counsel will always be needed,” he added.

If the resolutions are approved, Ratliff expects the reports to be completed by Jan. 16

At issue is the hiring of a legal defense firm for more than twice the hourly cost of the district's standing lawyers. 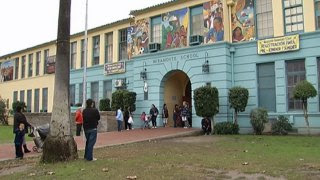 Miramonte Elementary School, in the unincorporated Florence-Firestone area, was the site of a sexual abuse scandal.

Friday, Nov 14, 2014 • Updated at 8:14 PM PST  ::  On the eve of what could be the biggest child sexual abuse case against a school district in the country, a board member with the Los Angeles Unified School District is questioning how the district allocates its money for legal cases.

Board Member Monica Ratliff, an attorney, plans to request two resolutions at the Nov. 18 board meeting focusing on what she says will increase school safety. The resolutions, titled "Assessing Possibilities for Increased School Safety Resources" and "Increasing Safety and Educational Outcomes Through Augmented Classroom Staffing" could rely heavily on an internal investigation into recent litigation costs against the district.

Ratliff declined to be interviewed by NBC4 but submitted a statement, writing, “I appreciate the interest that my resolutions have generated regarding this important topic. I want to know that I have done everything possible to protect our children. I hope my colleagues on the board will join me and pass the resolutions.”

She goes on to say that both resolutions call for analyses and plans to happen quickly, "so that the board and superintendent can determine what, if any, logical and effective next steps in school security and safety need to be implemented as quickly as possible.”

In an online report from LASchoolReport.com, Ratliff says she wants to see if the district can "redirect certain funds toward boosting school police or other security measures and adding a second adult to all classrooms." Ratliff is asking for a report on all litigation expenses, awards and settlements over the last five years arising out of child abuse allegations against district employees and in cases where criminal actions occur on school grounds.

It comes more than nine months after NBC4 reported allegations against LAUSD's general counsel of cronyism and malpractice for the law firms chosen to handle the Miramonte Elementary School child sexual abuse case, set to go to trial Monday. In a complaint filed by the district's former risk manager, Gregg Breed, he claimed the district chose the law firms because of their ties to Assistant General Counsel Greg McNair.

When NBC4 asked McNair if he had previously worked for the Sedgwick Law Firm, which documents obtained by NBC4 show is charging the district upwards of $460 an hour to handle the Miramonte case, he admitted the connection, but denied it was the reason for hiring the firm.

In an exclusive one-on-one interview with the district's lead attorney, General Counsel David Holmquist, he stood by the decision to hire the law firm. Holmquist called the $460 an hour price tag reasonable, and "a result of extensive negotiation."

"Mr. McNair made the recommendation to me but at the end of the day, it's my decision," he said in February. "I am very confident that we have chosen the right team, the right group of attorneys to be able to represent us and I would choose the same ones again, today."

But the cost to the District thus far, according to records obtained through California's Public Records Act, show the District's bill reaching $8 million just before the case is to begin with jury selection Nov. 17.

"Greg came to me and said, these are the firms that I want to assign this work to because they have the capacity and expertise that we need," Holmquist said of his conversation with McNair, "This is bigger and grander than our typical situation that we face so we need that level of expertise and I certainly agreed and it was absolutely the right decision."

LAUSD has a defense panel of attorneys that have successfully argued liability cases for the district in the past with a flat rate fee of $175 an hour. But Holmquist said the expertise and capacity for the amount of documents to be discussed and potential victims involved in the Miramonte case were far too much for the district's panel to handle.

The costs of the litigation in Miramonte and other cases over the last few years are what Ratliff wants to investigate. Ratliff similarly investigated the district's iPad program, which ultimately lead to the resignation of former Superintendent John Deasy.

Holmquist told NBC4 his choices in the Miramonte were well-documented by the school board.

At the time he said the district was dealing with 2,000 pieces of litigation, claiming to keep board members in-the-know on each case would be an unreasonable burden.

"That is my responsibility as the General Counsel of the school district," he said. "So I did tell them who was representing us but it's not a decision that they make, that's delegated to me. They could choose to do something if they wanted to but they've delegated that responsibility to me. If they're not happy with my decision, then they need to take that out on me."

When asked in February if Holmquist would be willing to allow for an investigation into the decisions made behind the Miramonte defense, he said he would, but commented, "There's no need for one and I don't want to have one going on while we're in trial. I don't think we need to do that at this point in time but I remain open and willing to have anybody look at our process after this is all concluded."

It could be an issue to spar over as Ratliff has requested the investigation be finalized by mid-January, which is only possible if the rest of the board approves her resolutions.