MiSiS: WHAT YOU NEED TO KNOW ABOUT LA SCHOOL’S COMPUTER CRISIS

Audio from this story : 4:53 Listen  (audio version has much more depth!) 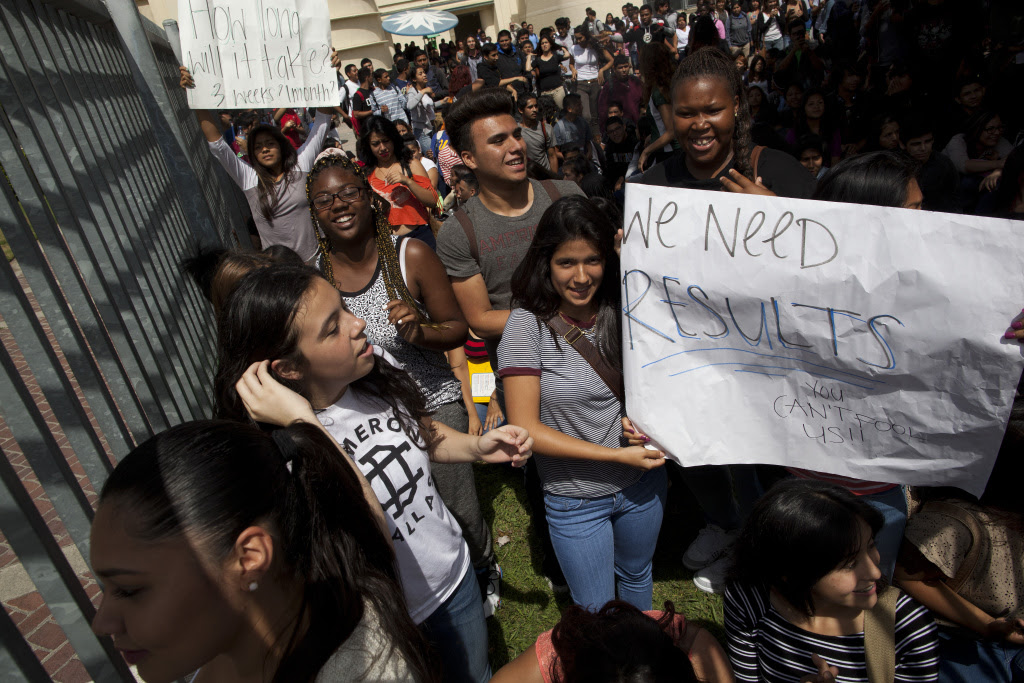 File: Jefferson High School students walk out from classes in August to protest problems with the MISIS class scheduling system that left many without academic courses to take. Benjamin Brayfield/KPCC

On Oct. 8, Judge George Hernandez Jr. ordered state and local officials to intervene at Jefferson High School over scheduling concerns, concluding the problems there were severe.  Public Counsel and ACLU are working to widen the state intervention to include more students and other schools.

It’s left many wondering — how did things go so wrong? To help add context, KPCC compiled a short list of questions and answers about what's been dubbed the "MISIS crisis" by teachers and administrators.

1. How did L.A. Unified end up with a student data system that fails to work properly?

Los Angeles Unified has long struggled to keep accurate records for its students, who now number more than 640,000. The district was sued in federal court for failing to provide special education services after mishandling the records of Chanda Smith, and in 1996, entered into the Chanda Smith Consent decree.

According to the district's website, the decree required the district to build a fully integrated student information system that tracked all of a student's data across grade levels and locations. The MISIS's predecessor — the Integrated Student Information System (ISIS) — was designed to replace 26 older systems.

When ISIS failed to deliver on schools' needs, the district began cutting ties with the company hired to develop the system and worked with consultants to build a new one.

Data from several old software programs did not accurately port over to the new system. For example, middle school classes started showing up on high school transcripts, according to guidance counselors.

When the program launched last summer, suddenly more than 30,000 teachers, counselors and staff logged on to the new program and overloaded the servers.  School staff reported having to sign in late at night to access the system.

Staff also complained about the design. One example: programmers didn't include all necessary student sorting features for teachers and counselors to hone in on specific groups of pupils.

"One thing that's pretty clear to us, that we didn't do enough interaction with the users as we designed the product," acknowledged Ron Chandler, the district's former chief information officer.

Last Wednesday, the contractor in charge the project, Bria Jones, was fired. The inspector general flagged her compensation months earlier, saying she was overpaid at $135 per hour.

On Friday, Chandler resigned in the wake of continuing problems with MISIS and another project he oversaw, the troubled iPad project that aims to get a tablet in the hands of every student.

3. When will MISIS be fixed?

Many teachers, principals and counselors patched together schedules by hand earlier this year, and school officials say the vast majority of students are in the right classes and getting the services they need.

But problems continue to emerge. The latest issue involves inaccurate transcripts, which comes just as students are scrambling to meet college application deadlines.

Interim Superintendent Ramon Cortines is sending out weekly updates on the steps taken by the technology staff to fix MISIS. The staff focuses daily on fixing the hundreds of "known issues" with the system.

4. How much will MISIS cost?

The district's spent $9.9 million on MISIS before launching it this summer. The district set aside another $20 million for the program, but officials say it will take even more funds to get MISIS to where it needs to be.

The funding request will have to go before the school board, which already approved an additional $3.6 million for new office computers so schools can run the data software properly and $1.1 million to address issues at Jefferson High. The district is also paying out $15,000 to $25,000 a day to pay for retired educators to manually fix transcript errors.