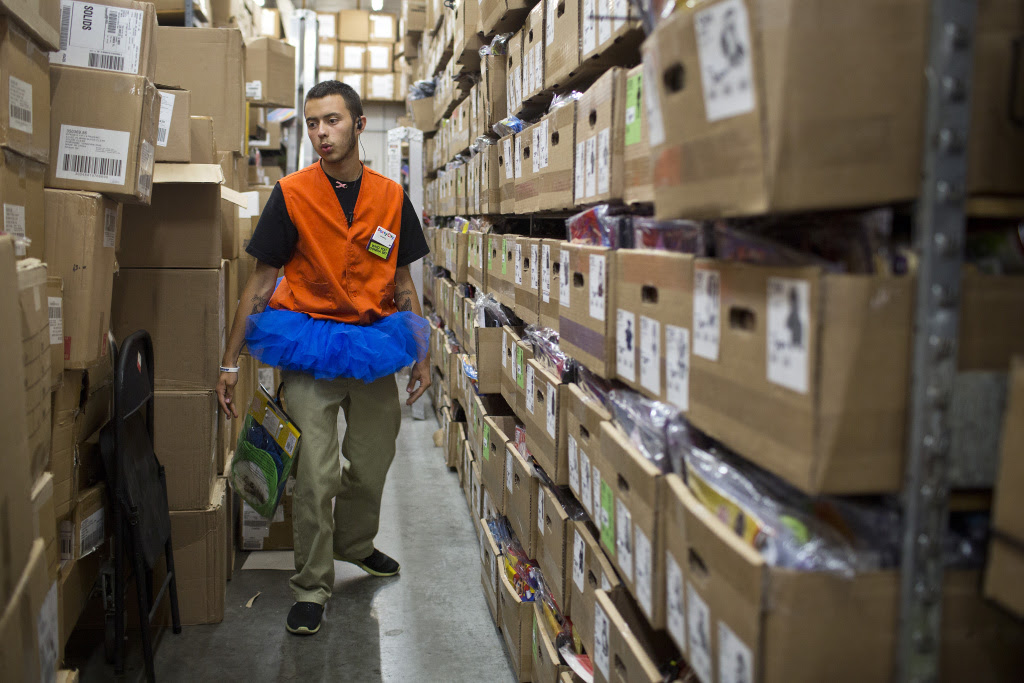 Gabriel Reinwoo, 17, dresses up in a different costume each day at Party City. Hundreds of students are enrolled in the decades-old Regional Occupational Program that places high school students in unpaid retail jobs among other types of work. Maya Sugarman/KPCC

Audio from this story: 4:06 Listen

13 November 2014  ::  A long-standing training program that allows Los Angeles high school students to work without pay for class credit at Party City, Best Buy and other large commercial chains is coming under some scrutiny.

The Los Angeles Unified School District's retail merchandising classes are among dozens offered through the Regional Occupational Programs and are designed to expose high schoolers to important job skills. The school district lists nearly 100 of these classes, including carpentry, computer-aided design, fashion, and culinary arts.

“What we’re seeing is students not having the opportunity to learn if you will, how to survive and be effective in the workplace,” said Russell Weikle, director of the Career and College Transitions Division at the California Department of Education, that administers the programs.

Once called vocational training, the work programs have been offered in public high schools since the 1970s. Though enrollment in the courses is dropping, school districts in Los Angeles, Burbank and Garden Grove — among others — continue to offer them.

What sets the retail merchandising classes apart is they place students in large chain stores such as Sears, JCPenney, Best Buy and Party City to work about 12 hours each week, unpaid. The students receive high school credit that can be used toward graduation.

The two retail merchandising classes at the Atwater Village Best Buy and Party City are run by teacher Steve List. His 19 students, all from Marshall High School across the freeway in Los Feliz, work in the stores three days a week for four hours each day.

Most have struggled in school and many come from low-income families.

A stroll through the two stores on a Monday, Wednesday or Friday in the early evening may leave a customer wondering why so many high school teens work in the stores.

“I was shocked,” said Rebecca Joseph, California State University, Los Angeles, education professor, when she walked into the store and found high school students working there for class. “And I thought, 'Oh, my goodness.' I can’t imagine working there for free because these are jobs. These are not places that you think of as a career trajectory.”

In this day and age, she said, when science, technology, engineering and math have become education gospel, she wonders why public schools place students in unpaid retail jobs.

“I’m trying to expose kids of poverty to other industries they’ve never seen or knew of, and in poverty you know landscaping, you know retail, you know food service,” she said.

Fatima Duncan, 12th-grader Naomi Alfaro’s mother, had similar thoughts when her daughter told her she’d signed up for the retail merchandizing class. But now she thinks differently. She said the class has changed her 17-year-old.

"She comes from work and does responsible things — like [she] packs her lunch, and she’ll say things like, ‘You know what? I’m not going to buy food because it’s too expensive,'" said Duncan. "Just little things that us adults do that I see her do now. I’m happy."

Party City has hired some of the students at minimum wage for the weekends. Naomi is one of them. She works behind the Party City counter taking customer balloon orders, finding the balloons and filling them up with helium.

"It feels great. It feels good to have a job, finally. To finally have a job and work in a place and have money and stuff," she said.

Some students say counselors advised them to take the retail class, and they didn't question them. Others said they urgently needed the credits to graduate this year, and retail was one of the few choices available. Most of those interviewed didn’t expect to attend college and others had no plans for life after graduation.

Senior Andrea Redford is one student who has hopes to go to college. She views the retail class as a stepping stone.

“I wanted to go to a university, but my GPA was really low,” she said. “I’m going to be going to community college, hopefully Santa Monica, and I’m trying to become a biochemist.”

“There was really no other reason. I wasn’t really academically into it. I wasn’t dumb. I could pass the classes. But the shop classes are the reason I went to school."

Researchers such as economist Robert Lerman, a fellow at the Urban Institute, say students doing work for high school credit should get paid because it pushes the employer and the student to take the relationship more seriously.

“They do get free labor, but I think bottom line is, the amount of kids that they hire is incredible. I would say at least 80 percent of the employees at this store went through my program,” he said.

Party City hired 15 of the 19 kids in the class at minimum wage on weekends during its busy Halloween season.

Despite the advantages of the program for some students, enrollment in the L.A. Unified retail merchandising classes fell from 3,872 in 2006 to 978  in 2014. A new state funding formula may cause school districts to eliminate some of the lowest-enrolled occupational program classes, state officials said.

For now, the retail merchandizing class is offering senior Andrea Redford jobs skills and a growing-up experience that helps her understand her parents’ work lives.

“They both have jobs that are time-consuming, and I always thought they make it seem so easy," she said. "But when I got a job, I was like, no. I’d rather be a kid for a little bit longer.”

This is wrong. Period.